Sailor's historic expeditions to help save the ocean

Sailor's historic expeditions to help save the ocean 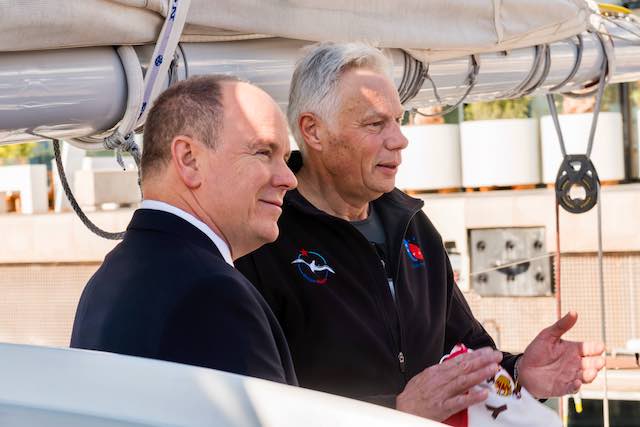 Moments after completing the first ever solo scientific round-the-world voyage, Yvan Griboval promised HSH Prince Albert of Monaco that he would “raise an army” to help preserve the ocean in his name.
Two years later, Yvan and his team are set to take off on a Mediterranean expedition, a ‘test run’ for his second major voyage to deliver crucial scientific evidence from the most far-fetched corners of the globe.
Yvan Griboval’s love for the ocean began as a young boy, when he would accompany his father, an impressionist painter, on sketching trips along the Normandy coast and the banks of the Riviera Seine. A keen fisherman, Yvan developed an early respect for the marine environment and honed his skills as a sailor competing in French and English regattas, before creating several sailing competitions of his own. A pinnacle of his life was as a team member alongside Lionel Péan when L’Esprit d’Equipe won the Whitbread 1985-86, now known as The Ocean Race.
The ‘lightbulb moment’ came in Yvan’s life when he read La carrière d’un navigateur written by Prince Albert I of Monaco. Despite the 150-year difference, Yvan saw himself in this ‘Prince of the Sea’ – a passionate sailor, a lover of the ocean and of liberty, who used his skills as a navigator and explorer to learn more about the ocean and help scientists preserve it. 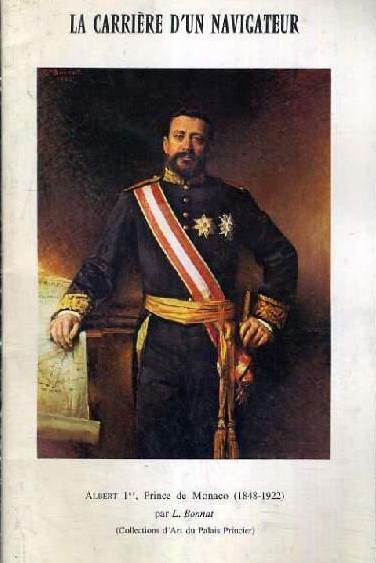 So, Yvan created the OceanoScientific Programme in Paris. He figured that ocean racing yachts sailing around the world via the three Capes (Good Hope, Leeuwin and Cape Horn) probably pass through regions seldom explored, if at all, by the international scientific community.
He conceived then that these sailboats, which produce zero-CO2, could be collecting quality scientific information to enrich the knowledge of climatologists, oceanographers and meteorologists.
“I thought it was important for scientists to know exactly what is happening in this part of the ocean, because the Circumpolar Current between the three Capes and the Antarctic is the strongest, most important current in the world,” Yvan Griboval tells Monaco Life. “The impacts of global warming can be studied in that zone because all currents in the world start there and return there. For example, if you throw a piece of plastic on the beach here, one day – we don’t know when – but some day it will end up in the Antarctic Circumpolar Current.”
In order to fit-out small sailing vessels with the necessary equipment, Yvan set about designing, developing and implementing the unique instruments needed to gather data. 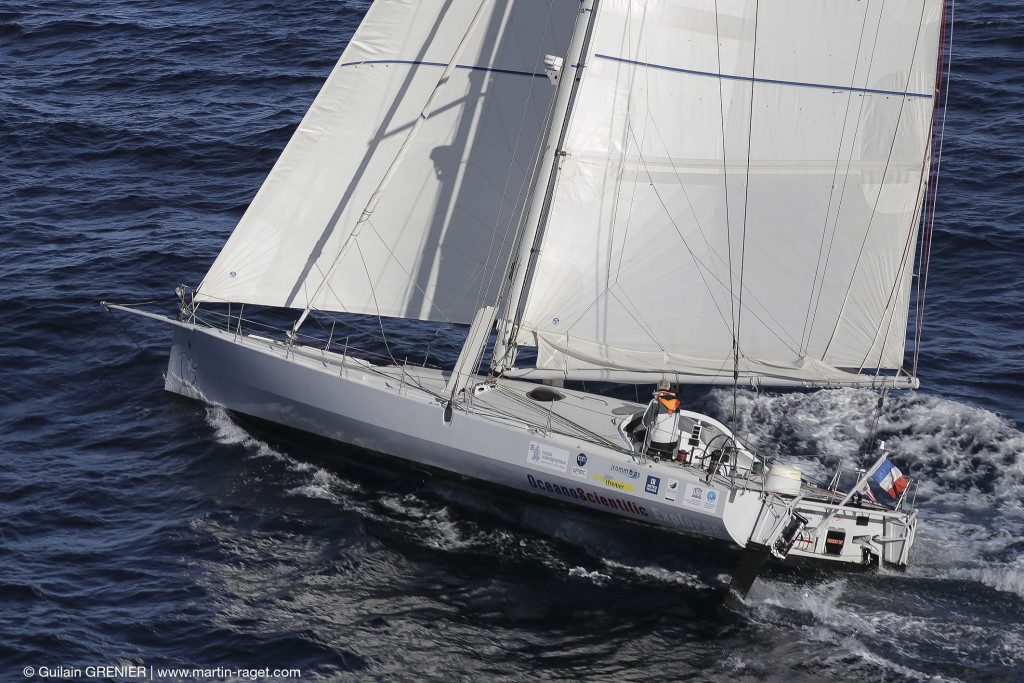 “We had to miniaturise all the equipment so it could fit in a 16-metre boat, so we worked with the scientific community who determined what we needed to make sure all the data we collected was of a very high standard.”
In 2016, Yvan set off from the Principality on the first campaign ever conducted by sail at the Air-Sea interface in the Antarctic Circumpolar Current under the three Capes of Good Hope (South Africa), Leeuwin (Australia), and the Horn (Chile). The flag of the Yacht Club of Monaco flew proudly on ‘Boogaloo’, a 16-meter monohulled high-performance sailboat that produces no CO2 emissions or waste.
“When I was out there all alone on the ocean, I just kept thinking that I needed my children and their children to see the ocean in their lifetimes as I am seeing it right now,” recalls Yvan. “Even if people aren’t physically in that part of the world, their impact is felt there.”
After 152 days of solo-sailing, Yvan returned to Monaco. Prince Albert held out the mooring ropes at the YCM’s pontoon of honour.


“The long navigation of Yvan Griboval with its important scientific objectives is an example of what can be obtained with tenacious willpower, when it is employed to a common cause,” declared the Prince. “We will lead all the energy and goodwill available to save the oceans, that of men of action and passion like Yvan, whose initiatives and liberty are precious inspiration for us all.”
Yvan handed scientists the oceanographic data and seawater samples he had collected.
“What we discovered when Yvan returned,” reveals his wife Cécile, “is that the in-situ data he collected didn’t match the data from the satellites. You see satellites can’t penetrate clouds and therefore do not provide accurate information at the air-sea interface. If scientists are working with incorrect data, it is impossible to know the exact health of the ocean in this important part of the world.”
Creating the OceanoScientific Association
On 14th of May 2019, Yvan and Cécile took their mission to save the ocean to the next level. They created the OceanoScientific Association of Monaco, and local jeweller and ocean activist Alberto Vitale signed on as vice president. The association’s headquarters are at the Yacht Club of Monaco.
“I was really fascinated about the idea that we could do something to discover the state of the ocean in that vital area, because Yvan and Cecile have discovered so many things,” said Alberto Vitale. “I am very happy and proud to be part of this association. I also have children and I too hope to deliver them a world as we know it today.”
Mediterranean Expedition
Yvan is set to take off on another Monaco to Monaco sailing expedition, this time lasting 20 days. The aim: to help the scientific community understand the consequences of plastic pollution in the Mediterranean.
“When plastic is released into the environment, the polymers fragment into macro-plastics, then micro-plastics, then nano-plastics, to become oligomers or additives,” says Yvan. “These additives are found in plankton – the first step of the food chain – and eventually arrive on your plate. Two areas in particular are affected at the global level: the Mediterranean and Southeast Asia, so it is necessary for everyone to understand this cycle.” 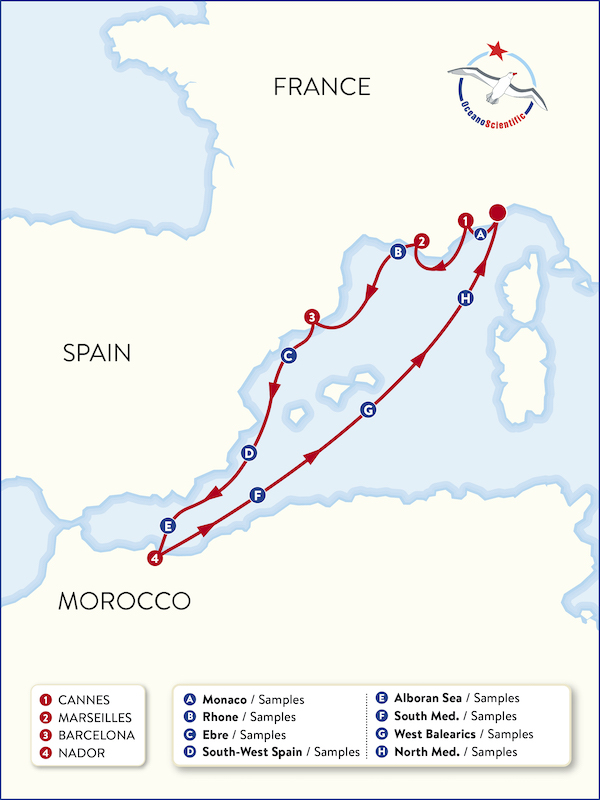 Yvan and his team will sail the Mediterranean onboard the biggest oceanic maxi-catamaran to date, the former Club Med – winner of two multi-hull races. The vessel will become the OceanoScientific Explorer for the expedition.
A port call in Barcelona, with the support of former Olympic gold medallist and founder of the Ecomar Foundation Theresa Zabel, will serve as an awareness-raising and educational exercise on plastic pollution and sustainable yachting.
Another port call in Nador, Morocco, will highlight the environmental clean-up of the Marchica lagoon – a former plastic wasteland turned ornithological reserve attracting an incredible number of migratory birds. An awareness raising conference will be organised in conjunction with the Mohamed VI Foundation for the Protection of the Environment. Saïd Ben Amar, the first Moroccan and Arab to row across the Atlantic will be on board the OceanoScientific Explorer, as well as an On-Board Reporter equipped with a drone to produce a film documenting everything from the beginning of the expedition, the navigation, and all the way to the preparation and handover of scientific materials.
The expedition was due to start on 26th March, however due to the current Covid-19 epidemic, it has been postponed to the summer.

Educating 8 to 12-year-olds
A strong focus of the expedition will be on communication, mainly with 8 to 12-year-olds, to raise their awareness about climate change and the need to preserve the ocean and its biodiversity. OceanoScientific has organised a large number of events with schools and teachers, including a conference with film screenings upon Yvan’s return.
“It is not enough to say: ‘You shouldn’t do this’, it is time to say ‘You can change the world if you want to’,” says Yvan. “It is also important to show them that if you have dreams in your life, then you must realise your dreams. It is up to you.”
Why the 8 to 12 age group? “Because at that age, they are clever enough to understand and they are at a time in their lives when they are interested in everything,” says Cécile, herself mother of 12-year-old triplets and in charge of the kids’ awareness program. “They also go home and talk to their parents. That is why it is important for them to develop an interest in and love of the ocean before they hit puberty, before other things take their attention.”
A precursor for something bigger
While the Mediterranean expedition is exciting in itself, it will also serve as a test run for future expeditions, including another around the world expedition in the Austral Ocean and the Antarctic.
“We are planning another trip in the CircumPolar Current – but not solo this time,” reveals Yvan. “It is important to be more efficient, so we will have better equipment as well as a female scientist on board linking to scientists in the laboratory, recalibrating the sensors and collecting in-situ samples, so we can obtain the highest quality results possible.”
They will be aiming to hit the seas during the Austral Winter (June-July-August), notching up another world-first. 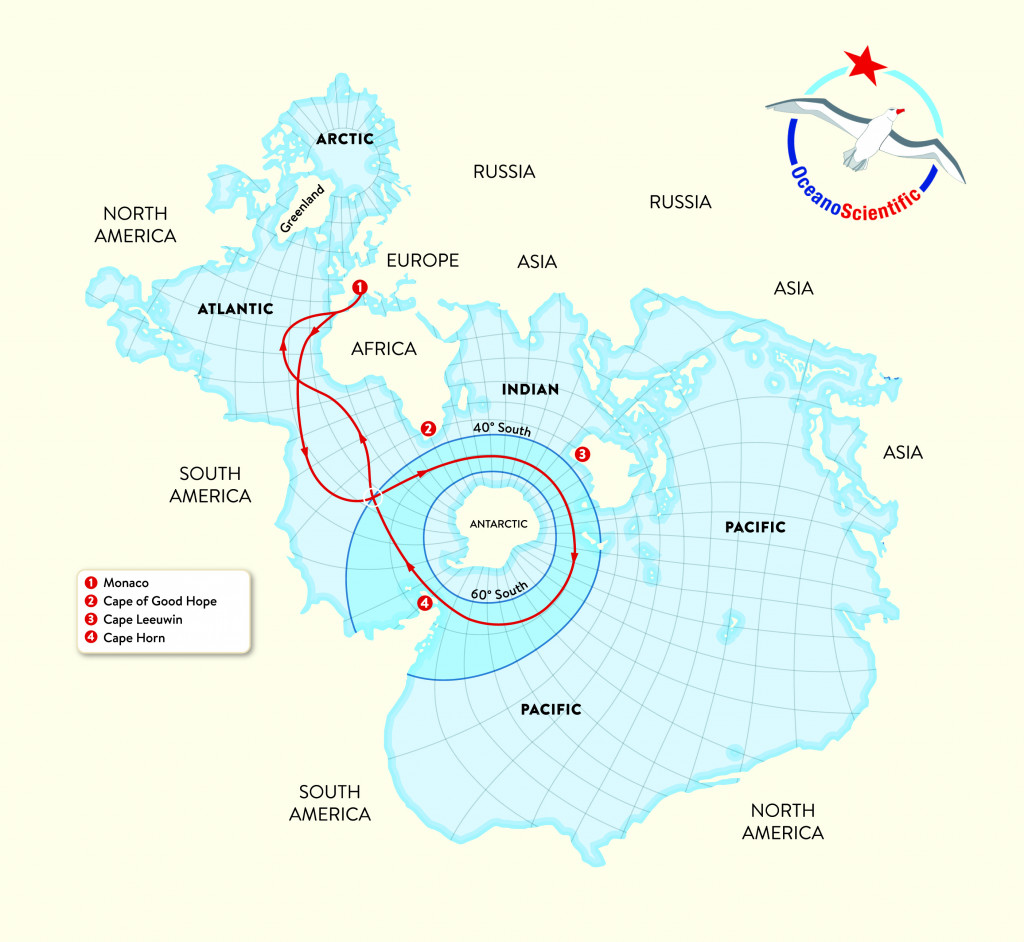 “We will be the first crew to sail around the Antarctic during this time,” says Yvan. “We will be able to do so because ifwe have a very fast boat – so fast it can put us ahead of bad weather.”
On board, an international crew will each share their experiences with their native countries, in their own language – an important tool in attracting the interest of a global audience.
The OceanoScientific Association
Yvan, Cécile and Alberto are now looking for members to join and support their scientific expeditions. The data that is collected is provided free of charge to the international scientific community to illustrate the causes and consequences of climate change, and help preserve the ocean in the interest of humankind.