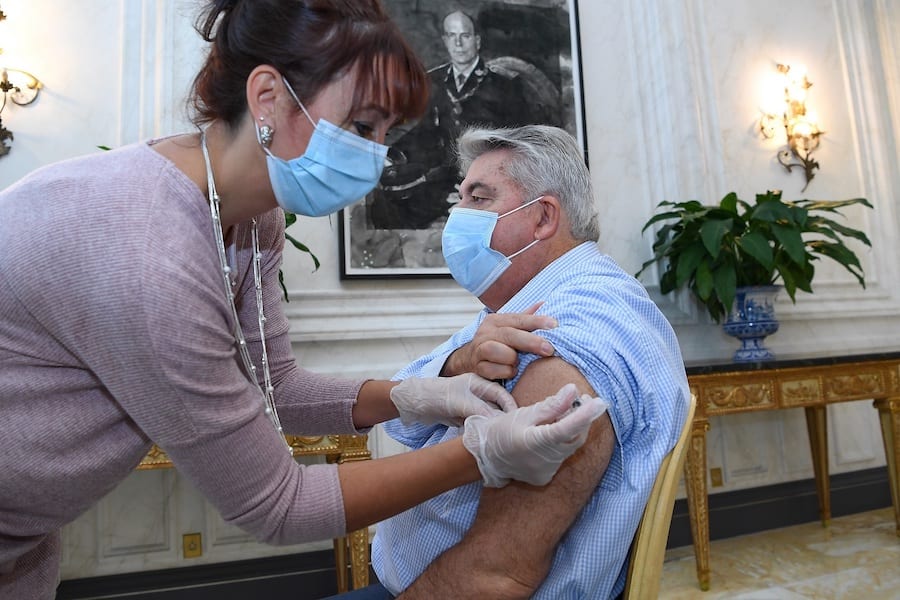 Minister of State Pierre Dartout was one of three leading members of the Prince’s Government to be vaccinated against the seasonal flu on Thursday, kickstarting Monaco’s large scale, free vaccination campaign.
As the circulation of the Covid-19 virus remains “very active” throughout the region, the government is strongly recommending the population be vaccinated against the seasonal flu. “It is important to do everything possible to limit, as much as possible, the combined effects of the two viruses which could circulate at the same time,” said the government in a statement.
Health professionals have been instructed to initially only vaccinate citizens and residents aged over 65, who have automatically received a voucher from SPME or CCSS. This voucher allows the holder to access one free vaccine in a pharmacy. The patient can then have the vaccine administered by a pharmacist, an attending physician or a private nurse.
The government indicated that it will soon communicate the vaccination process for other categories of people.
“The goal of the Monegasque health authorities is to get as many people as possible to be vaccinated. For this reason, the flu vaccine is this year fully reimbursed for anyone affiliated with Monegasque social security,” the statement reads.
There are a number of advantages to having the flu shot.
Seasonal flu and Covid, although caused by very different viruses, have identical symptoms: fever, cough, fatigue, and muscle pain. Diagnosis will therefore be easier if an infected person shows these symptoms but is vaccinated against influenza.
Each year, some flu patients are admitted to the emergency department with complications, but hospital resources need to be available to address serious forms of Covid.
Vaccination can also reduce the number of PCR tests carried out to determine if a person has coronavirus, when they are actually contaminated with the flu.
When a person has symptoms that are evocative of Covid, professional or school closures are the rule pending the results of PCR tests to reduce the risk of spreading the SARS-CoV-2 virus. Therefore, vaccination decreases the number of closures.
Finally, eliminating the flu reduces the number of days people will have to be away from school or work.
Minister of the Interior Patrice Cellario and Government Secretary General Robert Colle were also given the jab on Thursday to launch the campaign.