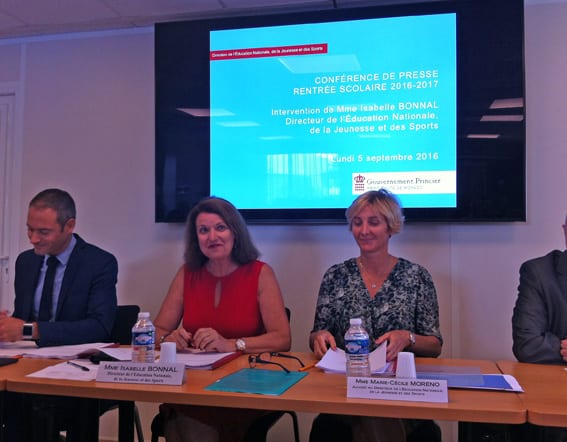 Ms Isabelle Bonnal, Director of the Department of Education, Youth and Sport, confirmed during Monday morning’s press conference at the start of the new academic year that the total number of pupils enrolled in the Principality’s schools is up by 46 on last year’s figures, with, as of September 2, 2016, 4580 in the public school system and 1303 in the private school.

Ms Bonnal assured the audience that both systems enjoy the “same quality of teaching” from Monaco’s 813 teachers.

Students will have 148 vacation days this year, 72 which make up summer holidays, 14 days more than the Academy of Nice.

Three new schools are planned for the coming years, with “Operation Stella”, a kindergarten (maternelle) in the Condamine, opening in September 2018, the Collège Lycée FANB (middle school/high school) scheduled for end of that same year or beginning of 2019, and the first stone being laid in October for a new college Charles III, on the west side of the Principality due to open around 2020/2021.

During the major renovation work on Stade Louis II after 30 years of “loyal service”, access will continue for schools’ physical education lessons, assured Ms Bonnal. She also highlighted that intensive English and European studies will be maintained within the curriculum, insisting that language learning is a priority, with a particular emphasis on oral practice.

World Art Day (April 15), Canada Celebrates 150 (a week of Canadian food in conjunction with the Lycée Technique et Hotelier Monaco) and an Electric Bike assignment are a few of the projects lined up across the year to engage students culturally. The annual Christmas Charity Show involving students from 3me to 6me at Collège Charles III, will be held on January 20, 2017. On the sports side, a Monegasque delegation of four students will participate in the Francophonie Games 2017 in the Ivory Coast (July 21-30) and a weekly yoga class will be introduced in primary schools, led by a qualified Monegasque yoga instructor.

The question of security was raised at the end of the conference, as police officers were present at schools last week in Nice, where classes start a week earlier. Ms Bonnal quickly reminded the room that security has always been a priority in Monaco schools, and that pupils are met by a school official at the entrance of the building. Cars can no longer park outside a school to drop off, even for a minute, and each school has a “police reference”, a direct dial number to ensure the quickest response time in case of an emergency.

With a 100 percent success rate at the Baccalaureate last year, including 64 “très bien” honours, the department emphasised it will continue to assist students in their academic journey, and has the necessary tools in place, including 210 new tablets to help teach math, for the 2016-17 school year.

Local News Stephanie Horsman - August 7, 2020
Friends of Lebanon, headed up by Bouran Hallani, has put out a call for donations to help those devastated by the recent explosions that rocked Beirut.