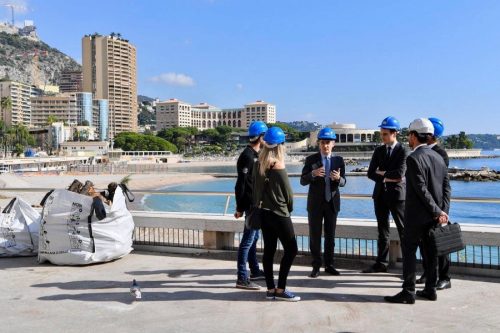 Larvotto traders who have had to close their doors for a major beach renovation have met with the Monaco government and other works representatives.

Minister of Finance and Economy Jean Castellini, Administrator of the Domaines Rémy Rolland, and Olivier Damour of the Public Works Department visited Larvotto on Friday 11th October, the site of a multi-million euro upgrade that will last for two years.

“The purpose of my visit is to show the Government’s interest in Larvotto traders and this project which involves a complete redevelopment of the area,” said Jean Castellini. “I can only commend the state of mind of each stakeholder during the process, in particular the Administration of the Domains (who) set the compensation based on turnover.”

The entire coastal area of Larvotto, including the public beach and businesses, was shut down in early October as bulldozers moved in to prepare the site for works.

It is one of two major redevelopments currently being undertaken within the space of a few hundred metres. The other is of course the land extension and new eco-district which is being built near the Grimaldi Forum.

“Today signals a new era and a great opportunity to renovate (Larvotto) and bring it to the finest international standards,” added Mr Castellini. “A magnificent urbanisation project is being built at sea, so it was only logical that as part of that extension, the Larvotto beach be redone.”

Business & Finance Staff Writer - April 22, 2017
Members of Monaco’s Junior Chamber of Commerce (JCI) are hosting this weekend the fourth edition of "Startup Weekend", which runs April 21 to the 23, and helps startups see the light of day. The Startup Weekend Monaco attracts engineers, developers, entrepreneurs, marketing specialists, graphic designers and artists, who are working together during the weekend to establish their new business. Monaco’s Junior Chamber of Commerce is the partner for the event, which last year included 81 participants and 36 ideas that turned into 10 projects. Over 54 non-stop hours, the schedule is broken down into: Day One – 60-second Pitch & Team Up, Day Two – Learn & Work, and Day Three – Present & Chose. Startup Weekend was founded in 2007 by Andrew Hyde and is a non-profit organisation with its headquarters in Seattle, in the US. Thanks to the concept, more than 2,500 businesses have been created around the world in the last five years. The global sponsors are Google, Eventbrite and CO. The event this weekend takes place at the Columbus Hotel. (Feature image: Facebook Monaco Startup Weekend)