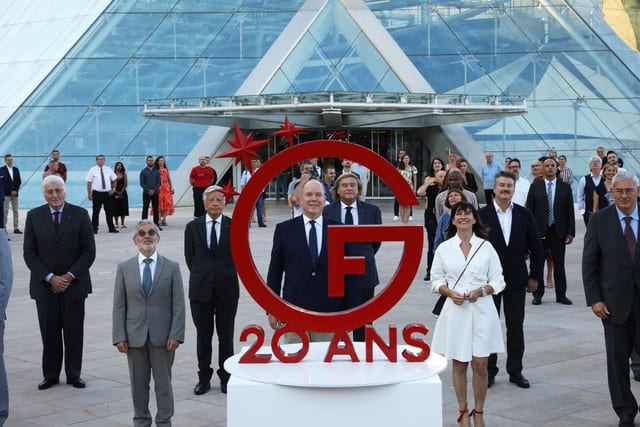 The Grimaldi Forum team has celebrated its 20th anniversary with Prince Albert, a momentous occasion during which details of two upcoming summer exhibitions were revealed.
Prince Albert joined a large cohort of Grimaldi Forum Monaco (GFM) employees on
Thursday 9th July to mark an important anniversary not only for the congress and culture centre, but for Monaco.
Given the coronavirus crisis, it is perhaps not the party that everyone had in mind, however the GFM team were keen to give it a good crack.
It is this enormous team spirit which is at the heart of the success of the Grimaldi Forum, said Sylvie Biancheri, General Director of the GFM, which has been an “extraordinary human adventure, with a team which has largely been there since the start and which each new recruit enthusiastically joins.”
In fact, more than half of the workforce has been with the centre for more than 10 years, while 25% have been part of the team since 2000.
After the screening of a film on the history of the Grimaldi Forum, Sylvie Biancheri spoke about the incredible rise of the institution, which had achieved record figures in 2019 with a turnover of €24 million, 290,000 visitors and almost 120 events. This was on the back of five years of constant growth.
Building on these figures, it was said that the Grimaldi Forum Monaco remains optimistic about its future. Recovery is expected from September when a full calendar of events kicks off, including an exciting new hybrid concept utilising digital meetings.
Indeed, the centre is refocussing its commercial strategy, launching a 360° virtual reality tour of the venue before the end of the year – an innovative way to introduce people to its new 600 sqm terrace in September and the building’s upcoming extension into the new Marretera eco-district.
In terms of culture and in light of the disappointing cancellation of this year’s ‘Monaco and Automobile’ exhibition, the GFM has been able to confirm that next year’s summer exhibition will be dedicated to Swiss artist Alberto Giacometti, featuring the largest selection of works ever loaned by the eponymous Foundation. The following year, in 2023, the Grimaldi Forum will showcase the master of Impressionism: Claude Monet.
In the shorter term, the GFM will mark its official birthday on 20th July with a cultural retrospective devoted to all of the 20 summer exhibitions and musical events of the past two decades, which the public can see on the GFM social networks.