Groundhog Day for AS Monaco

Groundhog Day for AS Monaco 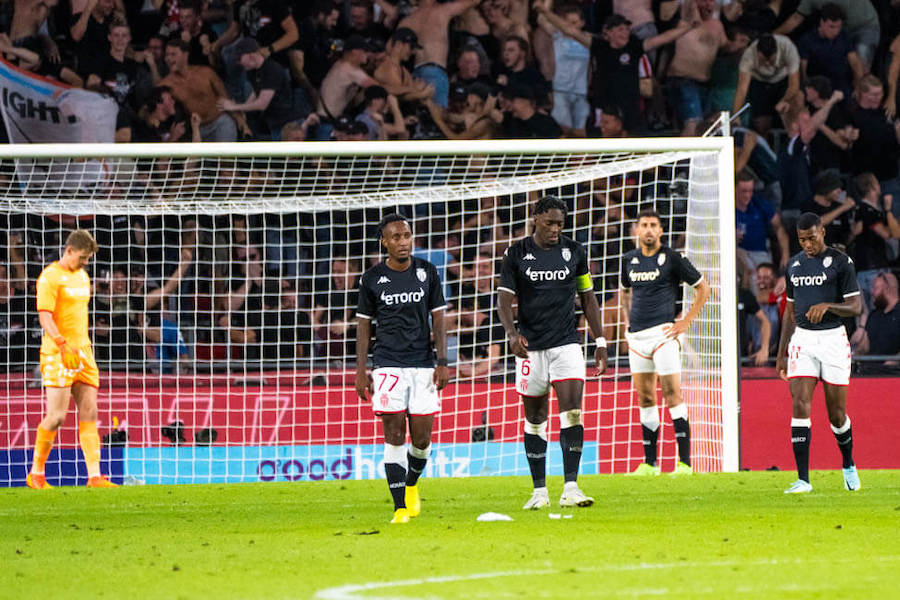 AS Monaco couldn’t escape their recurring Champions League heartbreak as fine margins once again consigned the Principality side to an early exit from the top tier of European competition on Tuesday.

To avoid Groundhog Day, the task was simple: repeat last season’s Europa League victory over PSV at the Philips Stadion. But just like in the film, breaking the cycle is no easy task, and Philippe Clement’s men found that out the hard way.

But unlike in Groundhog Day, there is no need for Monaco to undergo a radical transformation of the self; small changes will allow the club to fall on the right side of those ultra-fine margins, and avoid this “cruel” fate once again next year.

This treacherous route could have been avoided all together. Ignatius Ganago’s last-ditch injury time equaliser for RC Lens in the final game of the Ligue 1 season stole second place from Monaco’s grasp, and forced them to retrace last season’s steps by going through the play-offs.

Learning from last year’s heartbreak against Shakhtar Donetsk, where Monaco were dumped out of the Champions League due to a Ruben Aguilar own-goal in extra-time, the club returned early for pre-season this time around. However, possessing a fitter, more physical team wasn’t enough to see them over the line.

In a mirror image of the first leg, Monaco fell behind from a smart Joey Veerman finish in the first-half. Despite possessional and territorial dominance, Monaco lacked a cutting edge; Ruud Van Nistelrooy’s well-organised PSV side restricted Monaco to drawn-out, sterile phases of play before hitting on the break.

Clement saw the need to tweak his attacking unit at half-time and on came Breel Embolo for the largely ineffective Kevin Volland. The Swiss was a handful against Strasbourg at the weekend, and he was once again pivotal here.

His direct running and high-energy pressing reaped immediate rewards. His arrival seemed to ignite the rest of the side into action and Monaco soon found themselves level. Guillermo Maripán first struck the bar from a Caio Henrique free-kick. That narrow miss was followed by a flurry of corners in quick succession, and the pressure finally told. In a goalmouth scramble at a corner, Embolo managed to feed the ball through to Maripán, who this time made no mistake with the finish.

At 1-1, Monaco were clearly in the ascendency, and just over 10 minutes later they took the lead for the first time. Youssouf Fofana won the ball back in the midfield, and in a dynamic, direct transition à-la-Clement, Gelson Martins surged forward, feeding a sumptuous cross into the path of Wissam Ben Yedder, who finished first-time from just six yards out.

Having taken the lead, the siege on PSV’s goal abated and the Dutch side grew back into the game. The roles reversed as Monaco now reverted to playing on the break, and they could have landed a knock-out blow if not for a last-ditch Armando Obispo challenge on Embolo. Whether or not he got the ball was another matter, but VAR didn’t overturn the referee’s on-field decision.

The game therefore went in extra time, just as it did against Shakhtar last season. For the third time in the two-legged tie, Monaco struck the bar with an Embolo header in the opening minutes of extra-time, before history repeated itself.

Luuk de Jong landed the hammer blow with a back-post header to give PSV the lead in the second-half of extra-time. Monaco chucked players forward in a desperate attempt to save the tie, but to no avail. Monaco will once again have to settle for Europa League football this season.

The match was described as “cruel” by Axel Disasi, and as “annoying” by his manager, Clement. The Belgian added, “This match turned on details that gave the opponent the opportunity to score, but despite everything, I saw good things. We were better than PSV in both legs… we pushed until the last second to score but luck wasn’t with us in the end.”

Prior to the first leg, Clement said that he believed that Monaco were “too disappointed” by their elimination in the Champions League play-off last season, and that that negative energy spilled over into their league form. Clement said, “we can’t make that mistake a second time”. Avoiding making those same mistakes this season will give Monaco a path out of their nightmarish Groundhog Day scenario and finally give them the Champions League adventure that everyone around the club so craves. For this season, the Europa League must suffice. 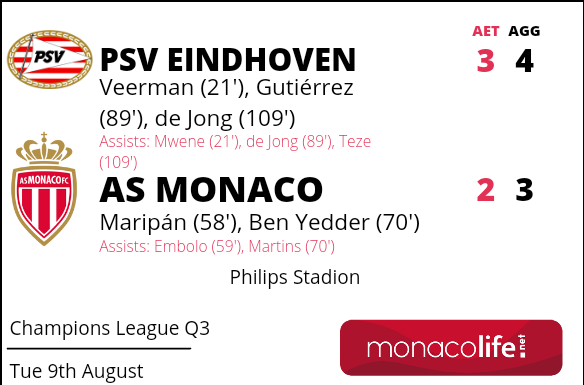