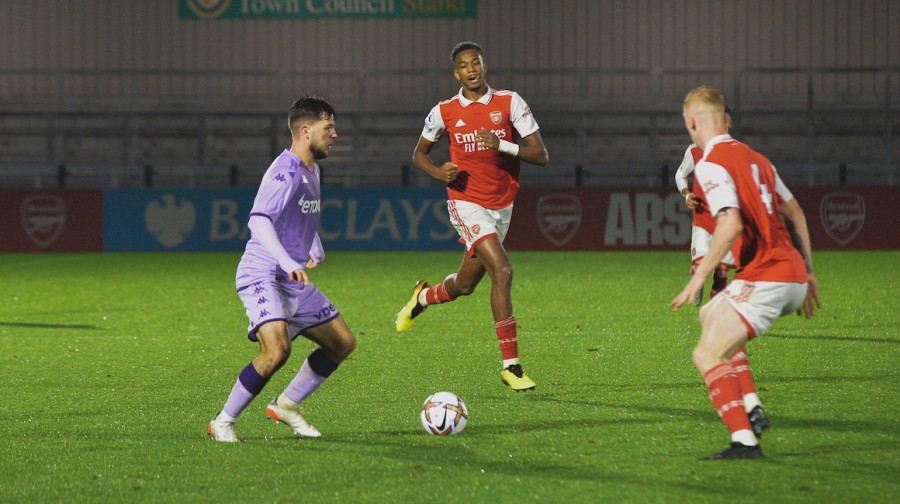 After dazzling under the bright lights of Old Trafford, AS Monaco’s Groupe Élite, as well as Monaco Life, made the trip down to London as the team faced Arsenal in the Premier League International Cup.

A different kind of challenge awaited Damien Perrinelle’s young side on Monday night. Coming down from Old Trafford, the Groupe Élite were brought back down to earth with a trip to Meadow Park, a stadium with a “soul” and “that breathes football,” according to manager Perrinelle.

A few hundred packed into the stadium, home to non-league side Borehamwood on a typically British winter evening, including performance director James Bunce and Chelsea-bound technical director Lawrence Stewart. Monaco fielded a much-changed side. Due to the individual talent within the squad, many players such as Eliesse Ben Seghir were away on international duty, representing their countries’ youth sides. After picking up a knock against Manchester United, Yllan Okou was also unfit for the encounter.

In goal, Lisandru Olmeta replaced Yann Liénard, who is away with the France U20 squad, and he almost got off to the worst possible start. He was caught dozing in possession and was robbed of the ball. An instinctive reaction allowed him to regain control of the ball and prevent an easy Arsenal opener.

Despite controlling possession, Monaco struggled to create clear-cut chances, whilst Arsenal were effectively evading the Principality side’s press and creating chances of their own.

Olmeta made up for his poor start with some brilliant stops to deny the home side, whilst at the other end, Salatiel Decarpentrie, who was a bright spark throughout the night, made an impressive run before testing the Arsenal goalkeeper with a low shot.

Arsenal did take the lead midway through the half through Catalin Cirjan. However, Monaco continued to dictate the rhythm. As it was against Manchester United, Monaco’s midfield was their greatest asset. Felix Lemarechal pulled out a man-of-the-match performance, showing why he is so highly rated and why he is so often training with the first-team squad.

Soungoutou Magassa, who has also played his first minutes for the first team was once again impressive, as was Mamadou Coulibaly. If all three continue to progress and remain at the Principality club, Monaco’s midfield will be an exciting prospect in a few years’ time.

However, in the driving London rain, this wasn’t to be their night. Off the bench, Jack Henry-Francis doubled Arsenal’s lead. Monaco hit back through Coulibaly, who scored in consecutive matches, after a brilliant ball from substitute Aurelien Platret, but Perrinelle’s side couldn’t find the leveler.

“What is interesting is that we played against a team that is completely different to what we faced in Manchester. With lots of individual talents, lots of speed, a good team structure and once again, it wasn’t decided by much. We like pressing high, they managed to get out on numerous occasions, but we also managed to get the ball back with that press. I think it’s really an instructive match for the players, for the team, for us as a club,” Perrinelle told Monaco Life.

He continued, “The report from the trip is rather positive in the end because we played a good match-up in Manchester. After that, we lost a few players to international duty. Despite everything, those that featured tonight showed up and showed that they were at the level. But there is work to do. If we want to rival the best academies, we have to repeat these kinds of matches in order to raise our level.”

On the performance of the impressive Coulibaly, the coach said, “Mamadou is a player who has a habit of shining in the big matches. In the U19 final against Nantes last season, he scored two goals, he scored at Old Trafford and he has now scored here. He is a player that is improving, and who clearly has things still to learn, but we feel that over the last month/ six weeks, he is on the right path. We hope he continues like that and that soon he can have his chance with the first team.”

The team returned to the Principality early on Tuesday, enriched by the instructive, informative, and memorable experience of their English tour, which will serve these young players in their continued development.