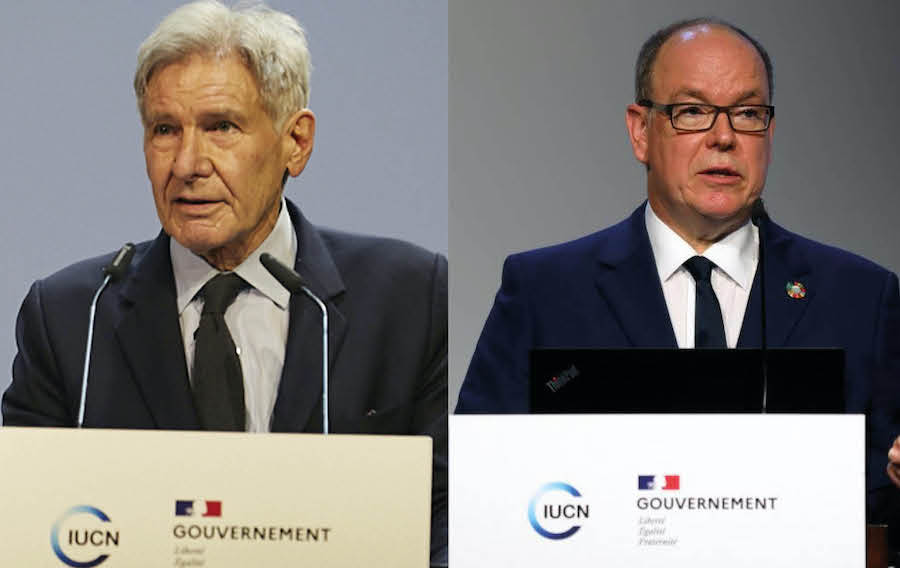 Prince Albert has joined Hollywood actor Harrison Ford and other high-profile personalities and world leaders in raising their voices to drive action for the preservation of the planet at a major conservation congress in Marseille.
The International Union for Conservation of Nature (IUCN) World Conservation Congress is being hosted in the south of France from 3rd to 11th September. This year’s congress is a key environmental milestone ahead of the United Nations conference on biodiversity and climate, to be held in Kunming and Glasgow, in the coming months.
It brings together several thousand leaders and decision makers, including French President Emmanuel Macron and Prince Albert of Monaco, as well as nonprofit, Indigenous and civil society members from more than 170 nations with the goal of conserving the environment and promoting nature-based solutions to global challenges.
These congresses are held every four years, but the focus of this one in particular is how to achieve a nature-based recovery from the Covid-19 pandemic, climate change, and the post-2020 global biodiversity framework currently being negotiated under the Convention on Biological Diversity.
On Tuesday 7th September, Prince Albert of Monaco opened the session on oceans, highlighting the essential role that the ocean plays in human health and livelihoods, and the blue economy’s potential to restore ocean health, transition to clean energy, and create jobs.
The IUCN’s Minna Epps ended the session highlighting the key outcomes that included supporting the call for achieving the 30-by-30 target, protecting at least 30% of the global ocean as Marine Protected Areas and other conservation measures by the year 2030; and adopting a legally binding instrument on marine biodiversity in areas beyond national jurisdiction.
Restoring ocean health was just one of a number of themes to be explored during the nine-day high-level congress. Others include conserving freshwater to sustain life, leveraging economic and financial systems for sustainability, and managing landscapes for nature and people.

Actor and environmental activist Harrison Ford speaking at the opening ceremony of the #IUCNcongress. pic.twitter.com/G5j5JpMrF1

The One Planet Summit also formed part of proceedings, the aim of which is to offer a new, pragmatic and effective framework for action.
One of the most high-profile speakers at the congress was Hollywood acting legend Harrison Ford, who evoked plenty of emotion in his speech, saying: “It’s hard to devote yourself to a cause that is so urgent and not be able to get the traction needed to make the change that is absolutely necessary. It’s hard to read the headlines: floods, fires, famines, plagues, and tell your children that everything’s alright. It’s not alright. Damn it, it’s not alright. We’ve got to make things happen; we’ve got to make it happen now. Come on everybody, let’s get to work.”


Top photos sourced from the IUCN