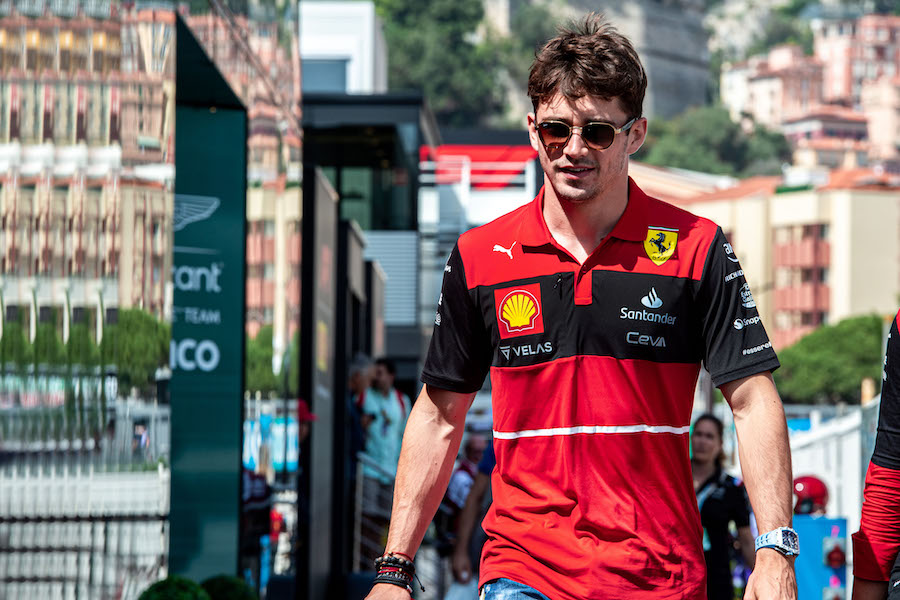 Charles Leclerc’s tough run at his home Grand Prix continued as a comfortable victory slipped from his grasp on a drying track at a heavily rain-delayed Monaco Grand Prix on Sunday.

Starting on pole position is usually only half the job, but in the tight streets of Monte-Carlo it means so much more. Pole-sitter Leclerc was therefore ideally placed to break the “curse” and finally not only finish a home GP, but win it.

The meteorological gods had different ideas come Sunday. Just minutes before lights-out, rain started to fall on the circuit, which initially led to a nine-minute delay to the race. What was seemingly a passing shower intensified and eventually lead to a delay of over an hour.

When proceedings did eventually get underway, they did so under the safety car, as it became quickly apparent that there would be no standing start. Another perilous element of the race was therefore removed, so long as Leclerc kept his nose clean and his strategy didn’t fail him, then that all-elusive Monaco victory would surely be his.

But on a drying track, Ferrari let the race slide. In a position which allowed risks to be taken, Red Bull, seeing the pace of Pierre Gasly in the mid-field, made the change to intermediate tyres early. By the time Ferrari responded just a matter of laps later it was already too late; the undercut had worked a treat and Perez sailed past to take control of the race.

Things would get even worse for the Monégasque driver. A team radio mix-up saw Leclerc pit again just two laps later for a set of slick tyres, which led to the frustrated driver letting out an expletive-ridden message from his cockpit.

Leclerc gave his insight into the costly radio conversations post-race. “The last message I had was not clear because I was told to come in and then to stay out, but by that point, I was already in the pits and that’s when I let it out on radio because I knew it was done,” he said.

When he left the pits, he had not only lost the lead, but also found himself outside of the podium positions, as Max Verstappen marginally filtered in ahead of him following his stop for mediums.

There would not be another round of pit stops. If Leclerc was to break the curse that loomed over him like the dark grey clouds that clung to the cliffs of Monaco, he would have to do it the hard way. Upon realisation of that fact, he could only muster a sarcastic “perfect” over team radio.

It was nonetheless clear that Ferrari had the pace over Red Bull, and Sainz immediately closed to within a second of Perez, before a huge whack of oversteer on the start/finish straight saw the Spaniard fall back.

Just as the race looked to be finally settling down into a rhythm, Mick Schumacher was lucky to come out unscathed after a huge shunt in the La Piscine section left his car in two pieces. The safety car quickly turned into a red flag, as the cars returned to the pit lanes for the second time.

Jumping out of the car to get a breather, the image of a disconsolate Leclerc shaking his head at the back of his Ferrari garage was a sign of a defeated driver, who knew that the victory was out of reach.

When the race restarted, both Ferrari’s put on the hard tyres to contrast the strategy of the two Red Bull drivers in the hope that they could outpace and ultimately overtake them towards the end. There was, however, an unsaid pessimism, the well-documented difficulties of overtaking at Monaco meant that the Ferrari team were banking on more rain to save them from their predicament.

But it never came. The top four drivers (Perez, Sainz, Verstappen, Leclerc) came home line astern, Ferrari’s superior pace ultimately counting for nothing in the streets where track position still reigns supreme. Whilst the tears flowed on the podium as Perez savoured an emotional first victory around the streets of Monaco, the contrasting image of Leclerc trudging back to the paddock alluded to what could have been for the Monégasque, whose dream home victory still eludes him.

And once again, it was factors outside of his control that stole the victory away from Leclerc. He reflected on the questionable strategic calls post-race: “Let down is not the word, sometimes mistakes happen but there have been too many mistakes both today and overall, and in these conditions, you can only rely on what the team can see,” Leclerc began.

“I’m used to going back disappointed but we cannot do that, especially in a moment where we are extremely strong. We cannot lose points like this. I love my team. We will come back stronger, but it hurts a lot.”

Leclerc maintains his second position in the driver’s standings, but now trails Verstappen by nine points, whilst winner Perez has closed within just six points of the Monégasque. After a mechanical problem in Barcelona and disappointment on home turf, Leclerc will be looking to bounce back in two weeks’ time in Baku, Azerbaijan.