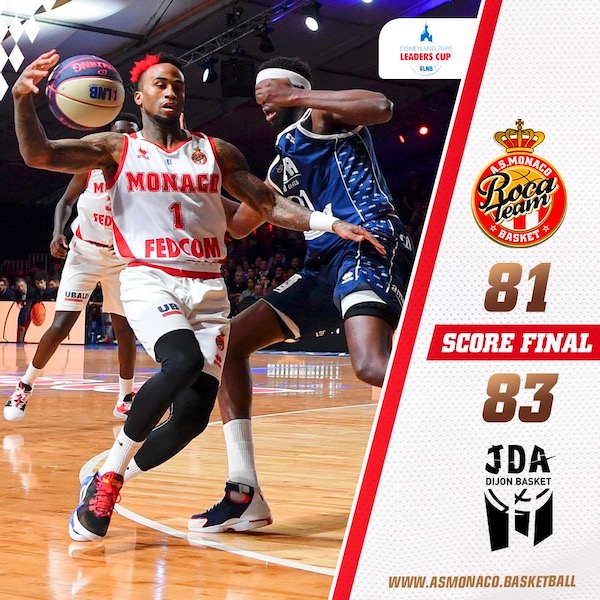 The game was evenly matched from the get-go, and neither team was about to relent. The entire first half was a cat and mouse between Roca Team and JDA Dijon, with no one ever clearly having an upper hand, though there were some magnificent plays by JJ O’Brien, Dee Bost and Eric Buckner.

Toward the end of the first half, Anthony Clemmons landed a fantastic shot from the line, followed by a beauty from Norris Cole, ending the half with a comfortable 47-42 lead for the red and Whites.

After the break, the lead was increased to the largest of the game with Monaco ahead 51-42, but from there the tide began to turn. Dijon went on a massive offensive push and for four minutes, Monaco didn’t get a single ball through the hoop, whilst their opponents played catch up making it a nearly even match.

By the end of the third quarter, the Roca Team were trailing, but only by two points. But Dijon launched a massive attack and pulled ahead by six points. With only two and a half minutes left, Monaco clawed their way back to a three point spread, though still at a deficit.

Fast forward to nine seconds left on the clock and Dijon’s Sulaimon made one out of two free throws, leaving Monaco behind by a basket. A Dee Bost-Norris Cole play with two seconds left equalised the score and the crowds went wild.

Less than a second remained and through some unbelievable stoke, Solomon recovered the ball from Julien and alley-ooped the ball in, giving Dijon the last second win.

Coach Obradovic was graceful in defeat, as only a man who rarely suffers it can be. He said of the match: “We must first congratulate our opponent, who deserved this victory, this place in the final. They played with enormous confidence. It was a very good match. For us, the 3rd quarter cost us a little. Offensively, we didn’t find the means to score baskets easily. But one cannot complain too much.”