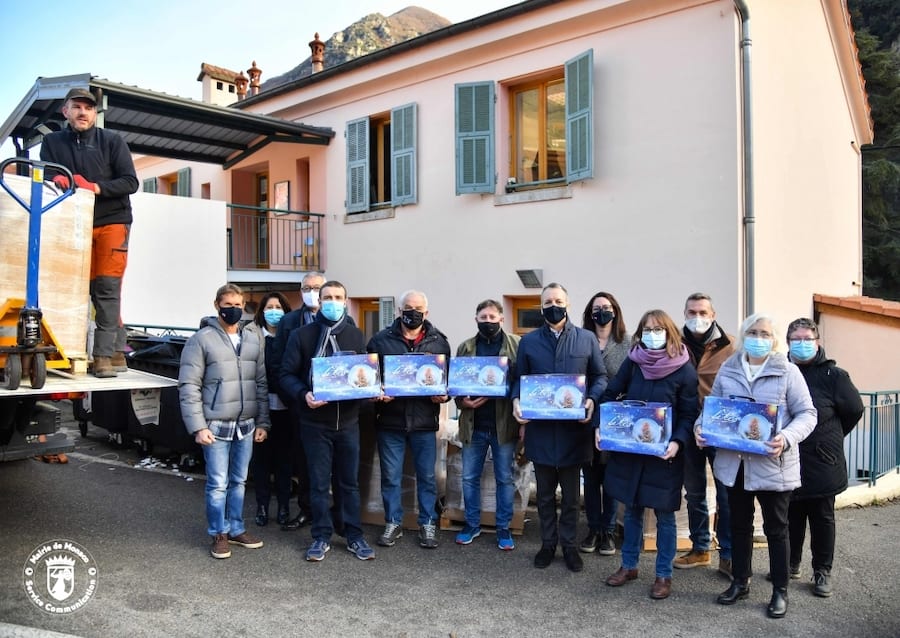 The Municipal Council has been busy handing out all of the donations collected in the Principality for the victims of October’s storm Alex, as well as its own significant contributions.
Following the devastation caused by storm Alex in October, Monaco’s Municipal Council wanted to join in the great outpouring of solidarity for the municipalities and residents of the Roya valley by providing support – logistically with the donation of vehicles and equipment, as well as financial. They also organised collections in the Principality.
Foodstuffs and financial donations
From the first hours after storm Alex, the council provided financial support by making two donations to help rebuild the infrastructure in the valleys: one to the Department of the Alpes-Maritimes (20,000€), the other in the municipality of Limone Piemonte (2,500€).
A few days later, elected officials mobilised municipal teams and a food and hygiene product collection was set up on 8th and 9th October at Espace Léo Ferré. More than two tons of goods were collected and transported to the valleys by the Light Relief Intervention Unit (ULIS). This solidarity continued with a large donation of equipment, stored until now in the workshops of the Municipal Technical Services, which will soon be assigned to different municipalities: 300 tables, 390 folding chairs as well as a desk given to the Mayor of Fontan.
Vehicle donations for the municipalities of Roya
On 11th December, Mayor Georges Marsan, Marjorie Crovetto, Karyn Ardisson Salopek and Claude Bollati went to Breil-sur-Roya to meet the mayors of the various municipalities hit hard by storm Alex. They handed over six vehicles previously belonging to the municipal fleet: a Mercedes flatbed truck with hatchback, a Toyota Yaris and four Kymco 125cc scooters.
A Christmas for the children
On Tuesday 15th December, Mayor Georges Marsan and Marjorie Crovetto went to Menton to hand over 1,260 children’s books collected from 24th to 26th November at the Condamine Market as well as at Stars’n’Bars as part of the European Waste Reduction Week (SERD) in collaboration with the Monaco Développement association Durable (MC2D).
These books were given to children aged 0 to 14 in the towns of Tende, La Brigue, Breil-sur-Roya, Fontan and Saorge on 19th and 20th December as part of the operation ‘Christmas for the children of Roya’.
The initiative has received the support of Prince Albert II and Minister of State Pierre Dartout.
Christmas baskets for seniors
A few days later, on 17th December, the council brought a little comfort and warmth to end of year celebrations with the delivery of 400 Christmas baskets containing a complete meal seniors and isolated people from different towns in the Roya valley.
The car
A Renault Trafic – offered by the Monaco City Hall on 5th November to the Semeurs d’Espoir association, was used to collect donations made by the citizens of Monaco and transport them to the valleys of the Vésubie (Saint-Martin Vésubie) and Roya (Breil-sur-Roya).