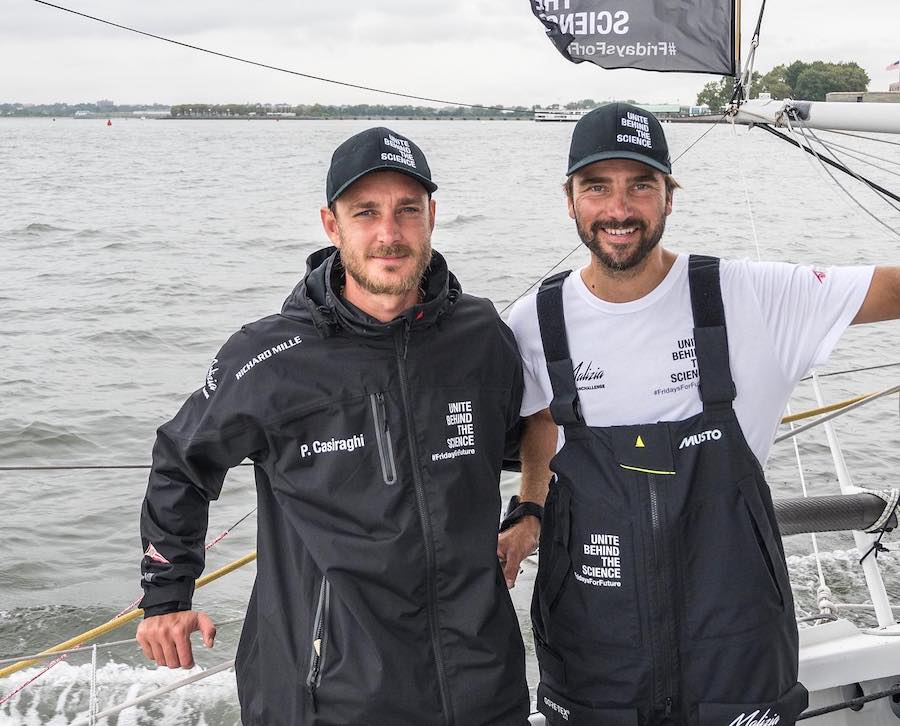 Pierre Casiraghi will see his German racing partner Boris Hermann skippering the first Monegasque yacht to participate in the Vendée Globe, a gruelling round-the-world sailing race in which he will compete for the top spot, as well as collect data on climate change.
The Vendée Globe, the world’s only non-stop, non-assisted, solo, around the world sailing race, will kick off on 8th November with Monaco’s first-ever boat in the running. A 60-foot Imoca sailing yacht named Seaexplorer will see Boris Hermann at the helm when the competition kicks off from Sables-d’Olonne. It will also end there 75+ days later.
Due to family commitments, Pierre Casiraghi has decided to sit the race out and told Corriere della Sera, “I have a family now and I think they are happy that I am not leaving…and then I’m certainly not a sailing professional with the same experience as Boris.”
This leaves Hermann, who has dreamed of participating in this race since he was a teenager, in charge. The challenge is daunting for even the most seasoned sailor and he admits to some trepidation.
“It will be the longest I will be solo on a boat, and so I will see how I react to that,” he says. “I feel I know myself, the ocean and the boat. I am quite confident. What I don’t know is that I have been quite fortunate until now in my sailing and I have never had a difficult moment, a catastrophe. How am I going to react (…) if I have a structural problem, the boom breaks, the mainsail rips or something like that?”
The idea to participate has been several years in the making, dating back to 2013. In 2016, Casiraghi and Hermann formed Team Malizia with the goal of taking part in the Vendée Globe. The idea expanded into an opportunity for scientific observation as well as a racing one, and now the mission of the Seaexplorer has become two-fold.
A mini laboratory has been included onboard that will be constantly analysing water samples as part of a research project with partners Geomar, Max Planck, and IFREMER. The samples are collected by an electric pump that will then studied and converted into usable data for the scientific community. This means of data collection is far less expensive than sending out separate, mission-specific boats, as the vessels in the race will be covering vast swaths of the sea anyway.
The journey will take Hermann on a lap around Antarctica where he will encounter huge storms, prematurely melting ice caps and invasions of seaweed. He will experience and witness climate change first hand and communicate this to the world.
The task of preparing for the race has been complicated by Covid, meaning Hermann will not be able to be on-site until just before the race. He will also not be able to welcome friends and family to see him off, making for a rather lonely departure. He has been carefully self-isolating with his wife and newborn baby and will take a final Covid test 48 hours prior to the start of the race.
The competition will start at 1pm on 8th November. The Yacht Club of Monaco and the Team Malizia site will broadcast regular updates on the Seaexplorer’s progress. Additionally, Hermann will send regular satellite transmissions to Casiraghi during the race. But in the end, it is one man and the sea. How does he feel about this?
“You have to pray a little bit to the gods of the sea,” Hermann says with good humour. “And I will give them whisky once in a while.”