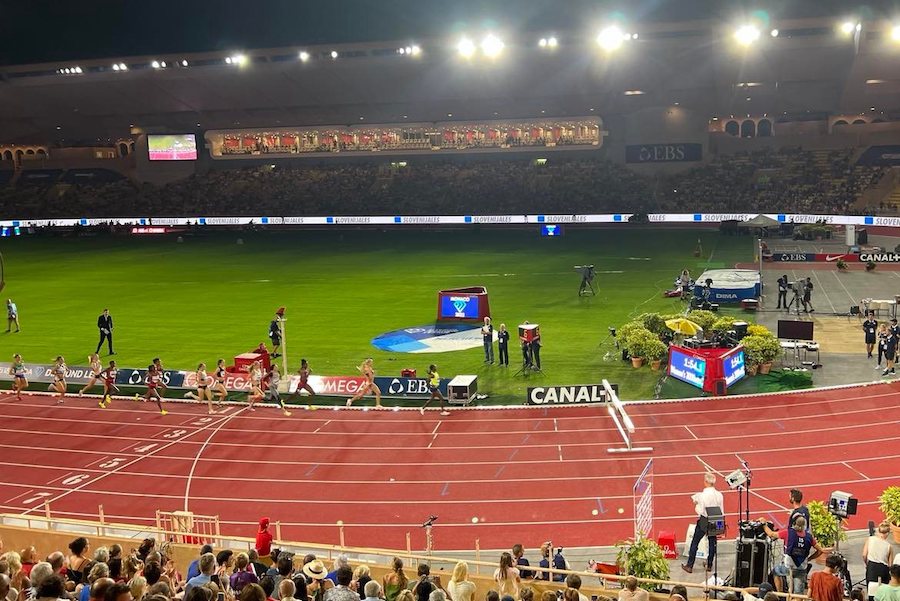 Fans packed into the Stade Louis II for the prestigious Diamond League event on 10th August, and they weren’t disappointed. Meeting records, personal bests and season bests were all smashed in multiple events.

All eyes were on Jamaican sprinter Shelly-Ann Fraser-Pryce in one of the stand-out events of the evening – the women’s 100m. She was unchallenged on her way to the line, the victory never in doubt. The question was the time, and she didn’t disappoint.

Her 10.62 is the fastest time she has run this year, and only 0.02 seconds off her personal best. She already has the third-fastest time in a women’s 100m, and now she has the fourth fastest time too.

As the European season draws to a close, Fraser-Pryce reflected on the year, telling Monaco Life, “It’s been an amazing season. Being able to run 10.6 consistently is remarkable for me, and I haven’t been able to wrap my head around it just yet. I think I will when I have a break.”

In the night’s other sprinting highlights, Noah Lyles took gold in the men’s 200m and registering a meeting record (19.46), which was nonetheless short of the American’s personal best. Post-race he seemed happy with his race, albeit rather ambivalent towards breaking the meeting record. “I thought I was going to run another 19.3, but I’m satisfied with 19.4 – the second fastest I’ve ever won. I’m happy,” he said. Questioned about the record, he told Monaco Life, he said, “I don’t care about that.” He continued, “My focus is on the world record. Shoot for the stars so if you fall, you land on the moon.”

It was a strong showing from the Americans on the track of the Stade Louis II. Grant Holloway picked up gold with a season best (12.99) in the men’s 100m hurdles. Exuding confidence, he revelead to Monaco Life that he had no doubt about achieving the result. “I was just expecting to win. Continuing to execute at a very high level is what I really want to come out here and do. Every year I’m hitting personal bests. We’ll take this, dissect it and go onto the next one,” he said. Asked who could possibly beat him, he replied, “Grant Holloway can only beat Grant Holloway.”

British 1,500m runner Jake Wightman took the 1,000m crown at the Stade Louis II, pipping Canada’s Marco Arop on the line. The Scot runner became the first Brit to win a global gold in a middle-distance event since Seb Coe in 1984 with his win in the World Championships in Oregon earlier this summer, and he has now backed that up with gold in Monaco.

He told Monaco Life, “I hoped at some point that Arop would come back to me. That’s the strength of being a 1,500m runner against an 800m runner. I knew I’d be strong in the last 200m. I didn’t really lose hope that I could catch him.”

Following his World Championships gold, he didn’t hit the same lofty heights at the Commonwealth Games in Birmingham, so he was pleased to return to winning ways in the Principality. “It’s always at big championships that you want to run your best. The Worlds was obviously a big surprise and a massive high. I struggled to come back to the Commonwealth Games and get the same drive. Mentally, I was very tired and I was happy just to pick up a medal there,” he said.

Wins for Miller-Uibo and Clayton

In the women’s 400m, Bahamas’ Shaunae Miller-Uibo lived up to her favourites tag to comfortably take the gold. Coming around the final turn, buoyed by the roar of the crowd, she strode clear before consolidating her lead on the final straight.

She told Monaco Life, “It’s one of our last races of the season and we wanted to have some fun with it. We decided to go out and take it a little bit harder than usual and I think overall it was a great performance. I think we put on a great show for the crowd.”

In the women’s 400m hurdles, Jamaican Rushell Clayton built on her already incredible season. Having set a new personal best this season, she bettered her fastest time once again with a 53.33.

The European season may be winding down, but there was no sign of fatigue at the prestigious meeting in Monaco, to the delight of the thousands of fans in attendance.