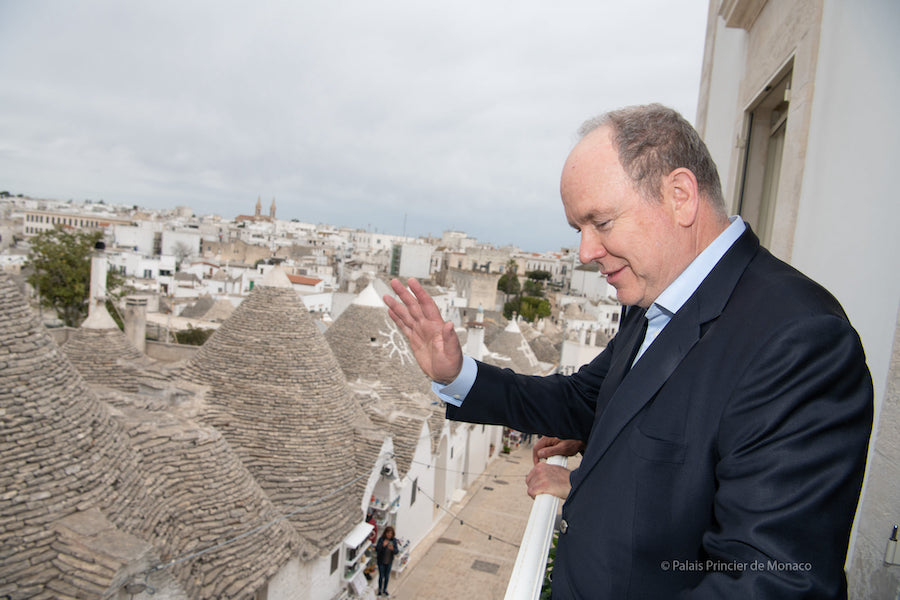 Prince Albert II has just returned from a whirlwind trip to several Italian towns linked to the Grimaldi family, including many interesting UNESCO World Heritage sites. Here’s a wrap-up of his time there.

Italy and the Grimaldi family have strong and ancient ties, a fact that Monaco’s Prince Albert takes very seriously. He recently completed a trip to the Principality’s neighbour, something he does on a regular basis, to visit sites that have a history with his family.

This year’s trip took him to Terlizzi in the Puglia region on 20th April, where he was joined by Mayor Nicola Gemmeto in unveiling a plaque commemorating the town’s membership to the Grimaldi Historic Sites of Monaco, a network of French Grimaldi sites created in 2015. Since inception, the group has expanded to include the creation of similar locales in Italy.

The Sovereign visited the church of Santa Maria di Sovereto, where a lapidary inscription with the arms of the Grimaldi was presented to him. He continued his journey on foot through the streets of the city and inaugurated a plaque commemorating his visit at the old castle. He then went to the cathedral to view a coat of arms of a cousin of Prince Honoré II (Prince of Monaco 1604-1662) dating from the beginning of the 17th century.

After laying a wreath at the war memorial, the Prince visited San Nicola Pellegrino cathedral, a Norman-era building emblematic of the city.

The following day, the 21st, the Sovereign was received in Canosa di Puglia, a town located in the province of Barletta-Andria-Trani, by Mayor Roberto Morra where he also unveiled a sign indicating the town’s inclusion into the Grimaldi Historic Sites of Monaco.

“Your municipality was, Mr. Mayor, among the first members of this new network, whose action will complement that of the association created in France in 2015,” said Prince Albert in his speech. “To coordinate the action of these two associations, French and Italian, I wanted a federation under Monegasque law to be created. I will officially announce it in Monaco in a few weeks.”

After inaugurating a commemorative plaque at the Town Hall, the Prince continued his journey on foot through the historic city centre and visited a school that has christened their reception room the ‘Prince Albert II of Monaco Room’.

In what can only be described as a whirlwind tour, the Prince visited many landmark ancient sites, including the Castel del Monte, located in the town of Andria, for a guided tour of this remarkable 13th century building – a UNESCO World Heritage Site since 1996.

The Prince then carried on to the castle ruins of Garagnone, nestled in the heart of the Alta Murgia National Park, located near Spinazzola and Poggiorsini and named for Roberto Guaragna, a Norman knight who arrived in Italy in 1048. It was destroyed by an earthquake in 1731 and today, only a few underground rooms and a part of the walls are still visible.

On the 22nd, the Prince made a guided tour of Matera, a municipality located in Basilicata, and a World Heritage of Humanity by UNESCO site. Considered the third oldest city in the world, Matera is famous for its cave dwellings, the ‘Sassi di Matera’. This city became the European Capital of Culture in 2019.

He was then welcomed by the local authorities at the Palazzo del Governo, where he went to Contrada Pietrapenta, about 12 km from Matera, to discover the Crypt of Original Sin, one of the most significant examples of medieval painting in the Mediterranean.

The visit to Puglia ended in Arberobello, a small town located in the Itria Valley, which is also part of the UNESCO World Heritage Sites. After lunch with Mayor Michele Longo, the Prince discovered the trulli, small dry stone houses with a cone-shaped roof covered with limestone slate.

On the 23rd, he spent the day in Genoa where he received honorary citizenship and a ceremony was held to mark the inclusion of the city as a “Grimaldi Historic Sites of Monaco”.

These Italian visits were instigated in 1997 by Prince Rainier III when Albert was still Hereditary Prince. Since then, Prince Albert has made them a regular part of his schedule.

Click on the gallery below to see more photos of Prince Albert’s visit to Italy. All photos by Eric Mathon, Prince’s Palace…

The Telethon Village will offer many attractions and entertainments this weekend at Darse Sud on Port Hercules. The event was inaugurated 5 pm on Friday by HE Prime Minister Serge Telle in the presence of its patron, Mme la Baronne de Massy. A dance gala followed with the Association Baletu Arte Jazz at the Theatre des Variétiés, then, at 7:30 pm, there was the Diner Spectacle Country and Chorale under the big top in place. On Saturday many more events are scheduled, starting at 1 pm, most of them featuring music and attractions for all ages. Many sporting associations will be represented, offering activities such as laser target shooting. Various food stalls will cater for appetites large and small during the two days. For more information see Facebook. Feature image: Minister of Health and Social Affairs, Stéphane Valeri. Photo: gouv.mc

Photo: Manuel Vitali/DC[/caption] As part of a reflection on the conservation of artistic heritage and the relationship to time, the New National Museum of Monaco welcomes artist Michel Blazy to Villa Sauber. Born in Monaco, Michel Blazy has earned an international reputation thanks to his installations integrating living materials. Three living works of the 51-year-old will be exhibited until March 18, 2018 at 17 avenue Princesse Grace. Co-produced by the NMNM and the Government’s Cultural Affairs Department for the last edition of the Venice Biennale, Blazy’s Shoe Collection is a presentation of worn shoes, which serve to pot plants. A luminous frame encircles the sculpture and an irrigation process allows the plants to grow. Soft Nature, which was acquired by the NMNM in 2009, consists of vegetables and fruit stuck with flake glue on a tablecloth made of the same material. The work invites the public to follow the slow transformation and disappearance of components, like agar dishes. The third piece, the NMNM Collection’s Skin Animal, is made from cotton layered with chocolate dessert cream. Villa Sauber is open daily 10am-6pm. Admission: €6