Home Sports Hit me with your best shot: Morgan Biancone

Hit me with your best shot: Morgan Biancone 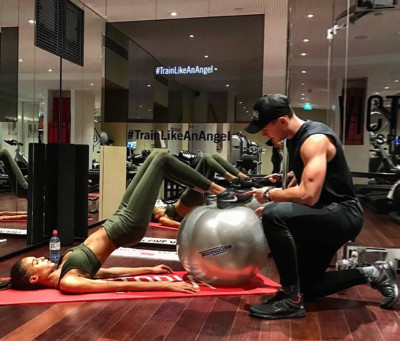 Trainer’s background: A professional footballer in France, the UK and Israel, Morgan Biancone trained at AS Cannes where David Bettoni (now assistant to Real Madrid’s head coach Zinedine Zidane) recruited him at age 15.

After Israel, he decided to develop a business based on his “Body & Mind” concept and became a certified personal trainer at the Fédération française de Fitness in Paris and also got his American certification with the National Academy of Sports Medicine (NASM).

Target area: Everything from head to toe. The exercises changed every day but the focus stays the same: self-myofascial release, balance-proprioception (position, motion, and equilibrium), warm-up, full body workout strength and cardio with elastic weights rope, postural improvement and correction, and to finish, stretching and sophrology.

Who’s the workout for: Everybody, but intensity, reps, weights – the whole workout – are all tailored to the client.

What equipment do you need: Training is outdoors (in season). Could be at the helipad or to work the lower body (and burn the legs) at the Fort Antoine Theatre or a flat surface like Stade Louis II to work on sprint technique. Could also be at a client’s home. Material and equipment provided by Morgan.

Hardcore level: “Depends on my mood.” No, seriously, each session is different and is based on the progression and goals of the client, among other factors. 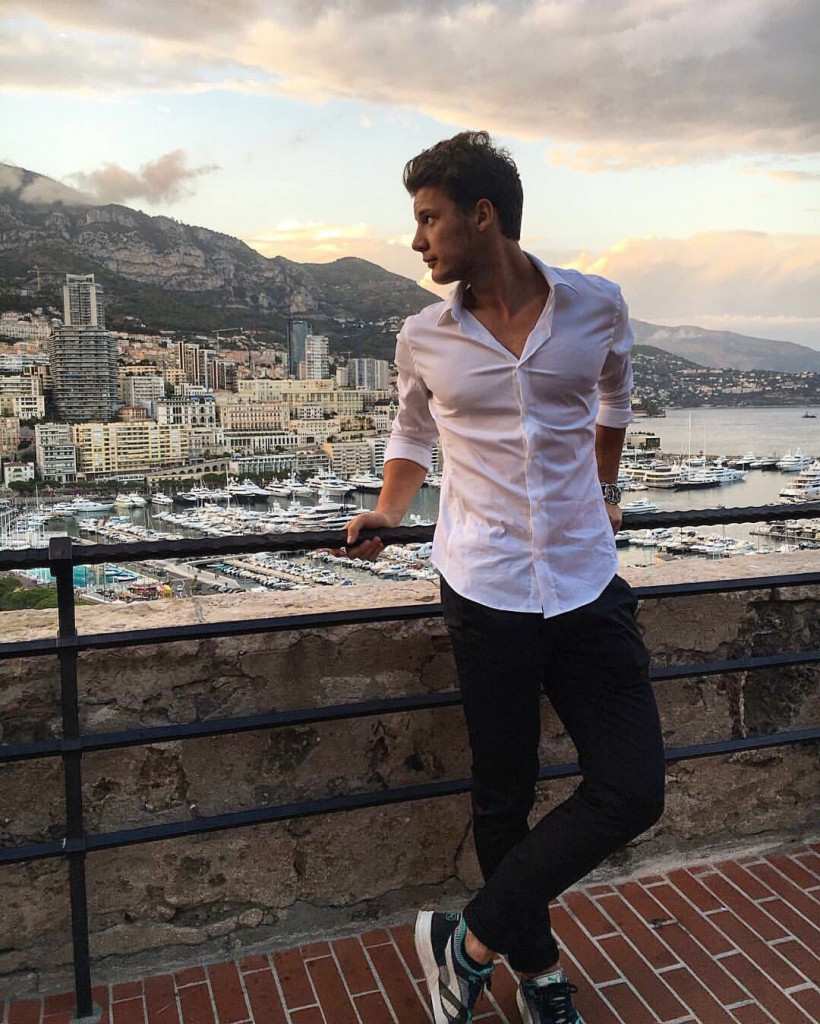 Heading off to spend 60 minutes with personal trainer Morgan Biancone, I anticipated an overly-buff macho dude more interested in his own biceps than mine. I mean, when you’re dating a Victoria Secret model who was just named the Sexiest Woman in France, it would be a full-time job to make sure you look good, right?

This trainer who spent the last three years between New York and Paris has an endearing nature and depth of experience that are both welcome in Monaco.

And while English- and French-speaking Morgan admits he’s always felt a special attachment to the Principality – “I have everything here, my family, my friends, the Mediterranean Sea – the 24-year-old has a new reason to call Monaco home.

He’s just signed with AS Monaco Futsal, where not only will he play with the indoor football club, but he’ll be the team’s physical trainer and try to recruit the best players to put Monaco at the highest level of the French League.

Unlike football, indoor football is played on court with boundaries, has five players on a team and uses a size-4 ball, which has 30% less bounce. Also, the game is played in 20-minute halves with a stopped clock.

“AS Monaco Futsal has an exciting project to reach an elite level in four years,” Morgan enthused. “I talked with the team coach, Jean Claude Haddad, and he was so open. I sense great energy and see big potential for the team.”

When he’s not developing indoor football in Monaco, Morgan is training minds and bodies. And he’s good at it. “One hour training is the easiest part of your day,” Morgan explained. “It’s the 23 hours after – the invisible training – that are the hardest. What you eat, what you drink, how much sleep you get, your social life. You are in fact your best personal trainer.” 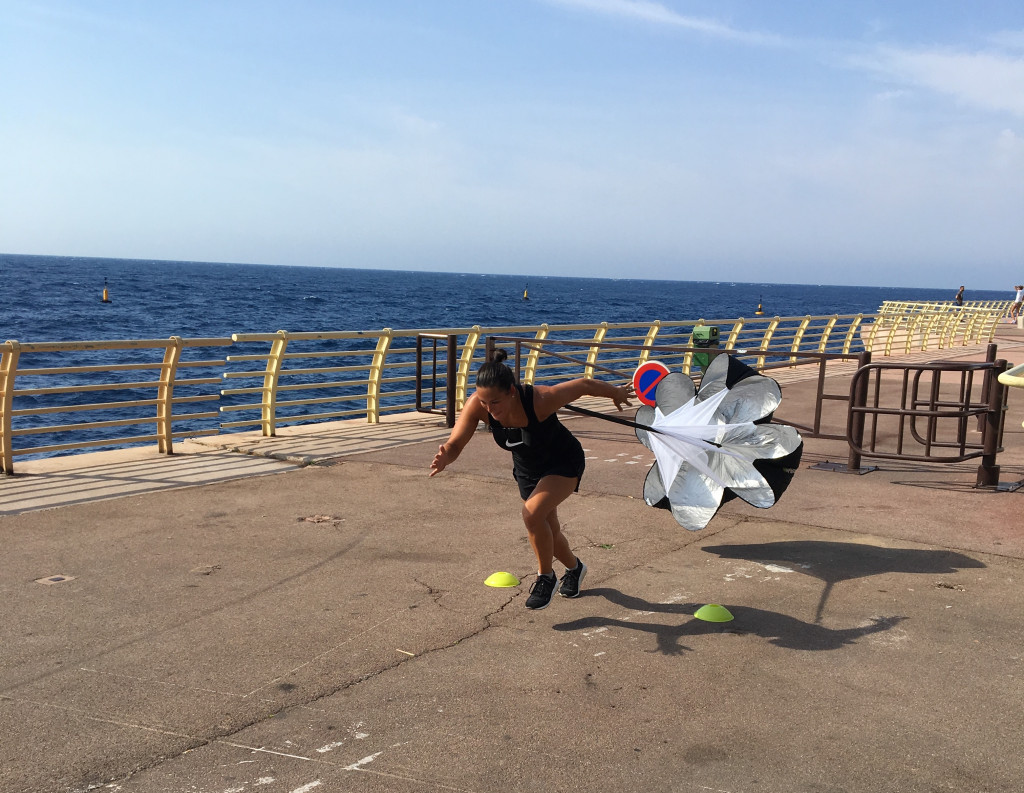 Morgan divides our session into two workouts. A sprint training for my colleague, which included 45 minutes of preparation and 15 minutes of sprinting.

And when I say preparation, I’m not talking limp jumping jacks and burpees. Morgan’s sprint session included a roll-on (7 times each muscle), balance-proprioception exercises (30 sec each leg, 3 times), skipping rope (3x1min) plus a global warm up (head to toes, 7min) and activo-dynamic stretching.

Finally, there were dynamic steps on the rhythmic scale, eccentric and specific exercises for the lower part of the body and ballistic exercises.

Then the main event: sprinting with a parachute. “For the experienced athletes, you can add a light relaxation-stretching plus 15 minutes of sophrology after your session,” Morgan suggested, “and it will help your recovery, and you’ll feel a progression in your performance over time.” 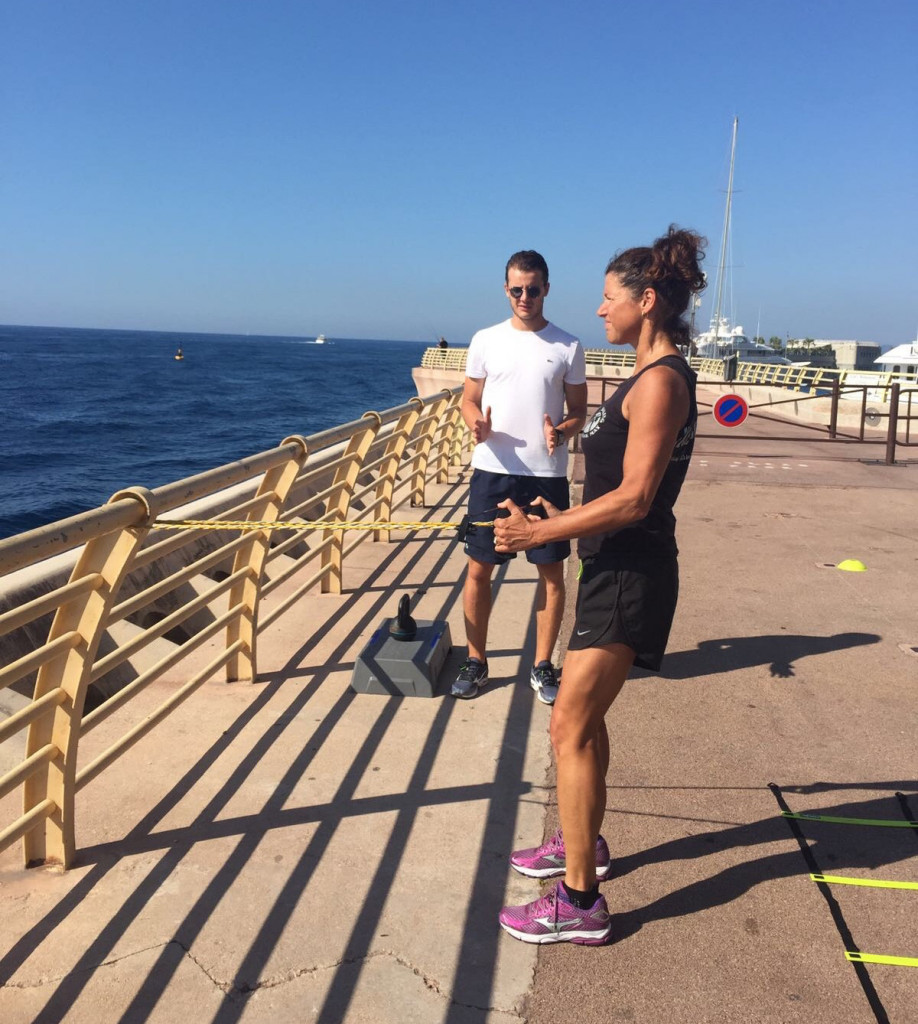 I wasn’t allowed to play with parachutes. After completing the Isles of Scilly swimrun in June and then an alpine swimrun in Engadin three weeks later, I have a stress fracture on my left leg. After discussing the nature of my injury and doctor’s advice, Morgan gave me a series of exercises me to assess my movements (overactive and underactive muscles), my balance and morphology. These involved walkable movements, and repetitions with elastics, balance discs and ankle weights.

It’s clear from the get go that Morgan (who never swears by the way) has an extensive sports background and didn’t wake up one day and decide to be a trainer. After an hour of bending, extending and twisting, I had no pain in my left leg, nor did I feel any niggles on my right side from over-compensation. After working on my iPhone syndrome, I felt taller and lighter in the shoulders and neck.

Morgan demonstrated that even with an injury, you can obtain a full body work out and achieve well-being. I’ve worked out with other trainers and walked away feeling, “yeah, that was good.” But with Morgan, I walked away digesting on what he talked about during our training and wanting to Google some of the principles he bases his programs on.

And although Morgan is fun and funny (and you can tease him about the pressure of being a Victoria Secret model’s boyfriend), he’s a thinker. For him, the strength of the mind is equally as important as the body, and he provided me with a reassuring philosophy: a strong mentality is essential in sports but it’s also okay to admit to yourself an injury sucks.

Hit me with your best shot Monaco Life: Maddy Karlsson

Photo: DC[/caption] On the occasion of the first match of the Jeep Elite 2017/2018 playoffs, the AS Monaco  Basketball Partners Association presented a cheque of one million euros to the President of AS Monaco Basket SA, Sergei Dyadechko, as the first significant contribution. Created at the beginning of the season at the instigation of the Prince's Government, within the framework of the Governance and Communication Convention which binds it to the AS Monaco Basket SA for two years, the association brings together donors and investors who want to support the Roca Team project. The association is under the chairmanship of Dr Ilhami Aygun, who will soon occupy a seat on the Board of Directors of the professional basketball team. Already a triple winner in the regular Jeep Elite season since its return to the French basketball elite three years ago, Roca Team also finished third and second in the Basketball Champions League on two occasions. The team is looking for a win in the playoffs that started Wednesday, May 23, against Pau-Lacq-Orthez.

Local News Stephanie Horsman - July 27, 2020
After five years with AS Monaco, Louis Ducruet has decided to leave the club to pursue other endeavours.