Home News Local News Hit me with your best shot: Swim the Riviera 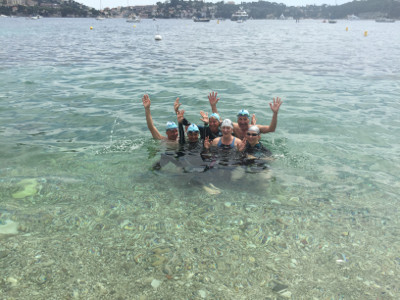 Trainer’s background: Loïc Branda, former French Open Water World Champion, several times Champion of France and 5th at the World Championships. “I can offer my experience and knowledge to athletes who want to improve their swimming in a natural environment for a specific event, like a 5k swim, a triathlon, a swimrun or just for fun.”

Type of workout: Technical training exclusively swimming in open water, in the sea, with waves, and using all four swim strokes – freestyle, backstroke, breaststroke and butterfly.

Preparation for endurance sports, general public who wish to improve their swimming, triathletes, swimrunners, swimmers in swimming pool who want to try in the open water. Non-swimmers preparing for a crossing

What equipment do you need: Depending on the time of year, a wetsuit (combi, in French) or bathing suit, goggles, swim cap. An inflatable safety device, the RESTUBE, is provided to each swimmer, which can also act as a life preserver.

Cost: Private lessons at €50/hour. Five-day course €650 and €310 for a three-day technical session (prices do not include travel or accommodation).

During the weekend of the Riviera Water Bike Challenge (RWBC) in June, in support of the Princess Charlene Foundation, I was, thanks to a gift from my husband, participating in a three-day open water technical swim course in Villefranche.

It seemed appropriate, as the Princess Charlene of Monaco Foundation was set up to address “one of the greatest silent killers on our planet” by teaching children essential water safety skills and how to swim. According to the Foundation, drowning “claims a life every 85 seconds”. The World Health Organisation states “drowning is the third leading cause of unintentional injury death worldwide, accounting for 7 percent of all injury-related deaths.”

While I consider myself a strong open water swimmer (currently I swim 25-35 kilometres a week in the Med), the other six in my group were of varied levels and ages. Francis was preparing for the Monte-Cristo 5km in Marseille; Jean-Luc, had signed up for the Alps Man Triathlon XXL in Annecy; Valerie, a member of the Nice swim club who, like Nathalie, wanted to gain confidence in open water; and Cecile, who, traumatised by a childhood incident, was so afraid of the water that until five years ago she couldn’t even walk along the seashore.

“After thirty years, I finally put a foot in 5 centimetres of water thanks to the team at ‘Foot in the Water’, who specialise in helping those with fear IN the water.”

There is a distinction, as Cécile points out, between fear IN the water and, more commonly, fear OF water.

Fear of water – or aquaphobia – has more to do with getting wet or splashed. For example, people who may not feel threatened by the sea or a bathtub but cannot put their head under a shower. Whereas, fear IN water is an imminent feeling that one will die immediately in the water.

By February 2015, Cécile, still with Foot in the Water, started to discover swimming in the sea using fins, a mask and snorkel, and by August of that year, she did her first course with Swim the Riviera in Monaco. “I could never have done it without the safe and caring attitude of Loïc,” Cécile explained.

“I had to push myself to swim in the sea without the specialised framework of Foot in the Water and I’d get back in the boat as soon as I’d had enough swimming. I discovered though that I could feel at one with nature and became addicted to open water swimming.

In September 2016: Cécile completed her first open water event the 2km Prom’Swim, and will this September attempt the 5 km distance. She wants to become a master swimmer and now co-animates the Foot in the Water program.

Our three-day Swim the Riviera course was divided in two morning and afternoon sessions, with a long lunch at a nearby restaurant included. We wear wetsuits, but in July and August, you wouldn’t need to. 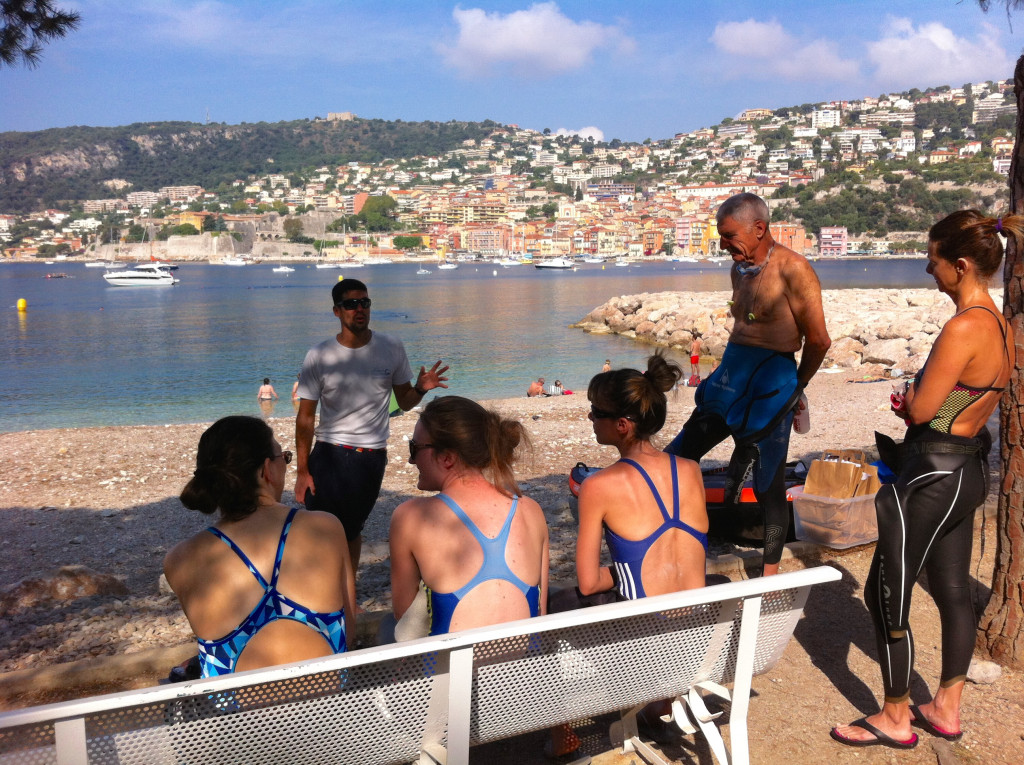 The first two days, we used Plage de l’Ange Gardien, at the far end of the Marinières parking lot, as our base, and working individually or in groups of two, there were lots of unique exercises and personalised observations. The views of Villefranche from the water are stunning.

The second day, participants are filmed swimming so they can see their technique, strengths and weaknesses. And there’s a mini-talk about nutrition, followed by more practice. By the third day, the group have become bosom swim buddies for life. From the Plage de la Darse, with its easily marked buoys, it’s a morning to put into practice all of Loïc’s advice.

Regardless of your level, you will finish Swim the Riviera a better, more confident swimmer. I went on to do the ÖTILLÖ Isles of Scilly Swimrun, which included 8 km of open water swimming in the Atlantic, with two long swim segments of 2km and 2.5 km in 12°C water. Loïc’s words echoed in my head when fatigue kicked in and I needed to stay focussed.

Like Cécile, I would encourage any of you who have never ventured beyond a swimming pool to give open water swimming a try. “Loïc knows how to adjust his technical advice and progression of swimming distances in total safety,” Cécile shared. “And if I felt safe, everyone should be able to feel safe!”

As for me, Swim the Rivera was the most thoughtful and practical birthday gift ever.

Hit me with your best shot Monaco Life: BOOST

Hit me with your best shot Monaco Life: THIRTY NINE

Monaco Matchmaker: To Catch a Thief 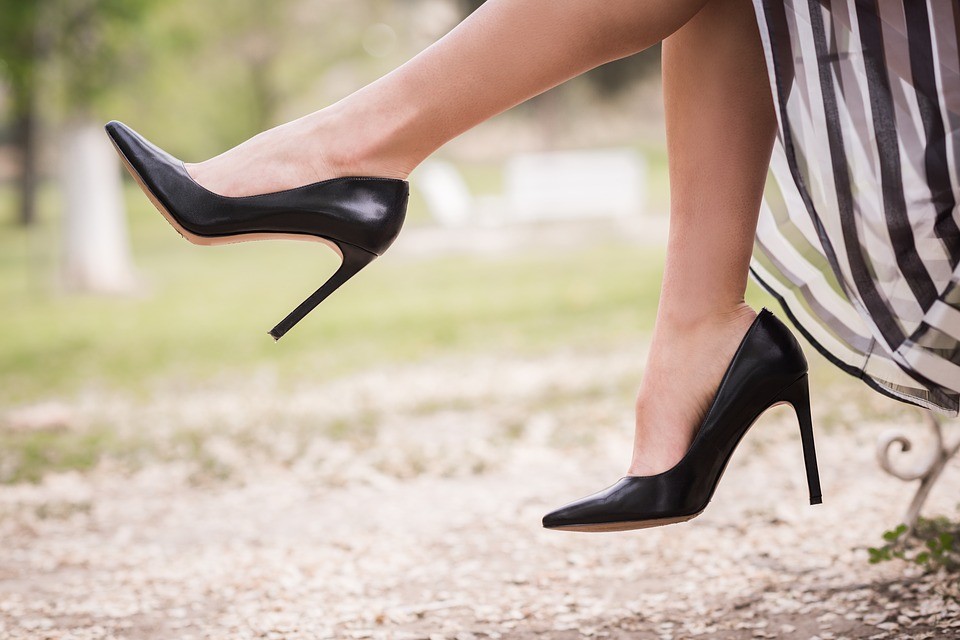 February, the month when Cupid’s bow is poised to strike hearts everywhere. His aim wasn’t looking quite so steady this time last year when my matchmaking colleagues asked me to take a “tricky” female client for a cocktail and a chat. “It’ll be fine,” they said. “You’re both around the same age, both used to getting what you want, and both have apartments in Monaco. That’s a good place to start!” The client, Katrina, a Scottish high-flyer in her indeterminate forties, had been married twice and chosen a career over children. She was running a TV station by the time she was 30 and the sale to one of the Murdoch group of companies had afforded her a choice of jobs. Actually, she found she was pretty good at making money, buying up a series of buildings that were to become posh student housing for rich parents sending their coddled offspring to British universities for the perfect “finishing-school” education. I was delighted to spot Katrina as I walked into Buddha Bar. She had clearly taken my advice that “you can never be overdressed in Monte Carlo” and she was perched on a bar stool blinged up the ying-yang.

[ihc-hide-content ihc_mb_type="show" ihc_mb_who="reg" ihc_mb_template="" ] “Where on earth did you get that ridiculously fabulous fur?” I asked. “Oh, I just dropped into your friend Katie Holmes’ store, The Queen Bee,” she casually responded. “I was in there for a few hours less than the average Monaco socialite, as I’m a size 12 and not a size 0. But hey, I’ve got enough bags and coats to make me feel better about not having a boyfriend … sniff.” Sensing that I was going to get a grilling, I decided I better call in the big guns to help the evening along. “Waiter, deux martinis s’il vous plaît. Dirty for me.” I raised an enquiring eyebrow at Katrina. “Porn star,” she jibed. Good girl. “So darling, what’s been happening?” “Well,” she started, “I was sent on the most horrendous date recently with a man who was half my size in height and girth. I think the moment he laid eyes on me he thought I was going to have him for breakfast. Trust me, I wasn’t. I don’t like my bacon that lean.” She fiddled with her phone for a moment, looking for a photo of the Wee Date, while I prudently signalled the barman to encore our drinks. After several martinis and plenty of psychotherapy I had a profile in my head of what Katrina really wanted. She is your typical ball-breaker at work, phenomenally successful and with all the material assets that come with wallet-bursting compensation. But peel back a layer and you’ll find a surprisingly delicate woman waiting to be scooped up by a big-hearted mountain of a man, who could wrap her vulnerability up in his chivalrous bulk and make her feel equal parts Queen Bee and Size 0. I didn’t want to say anything, but I had a hunch I knew someone for her. Peter was a strapping good looking and old-fashioned chap. An ex-Army officer, he retrained as a management consultant. He lived in Winchester but had a pied-à-terre in London where most of his work was based. Bingo. Katrina also had a home in London. Mid-fifties, widowed for some five years, he preferred to meet the old-fashioned way – through friends … or in a pub. On their first meeting they were out for a stroll in London’s Soho when Peter spotted a handbag thief. He gave chase and tackled the man, retrieving the purse. Katrina lolloped sportingly behind, managing not to ruin her Louboutins. When she caught up with him, together with the rather dashing policeman she’d grabbed on the way, Peter was pinning the bag burglar to the ground. He looked up at Katrina with her policeman escort and smiled, “My darling, what took you so long?” She was, of course, smitten. The rest, as they say, is a matchmaker’s history. Barbara Brudenell-Bruce is a matchmaker with London’s exclusive matchmaking agency, Vida, and her network boasts an impressive list of entrepreneurs, celebrities and aristocrats. She lives between Monaco and London. Article first published February 19, 2018.