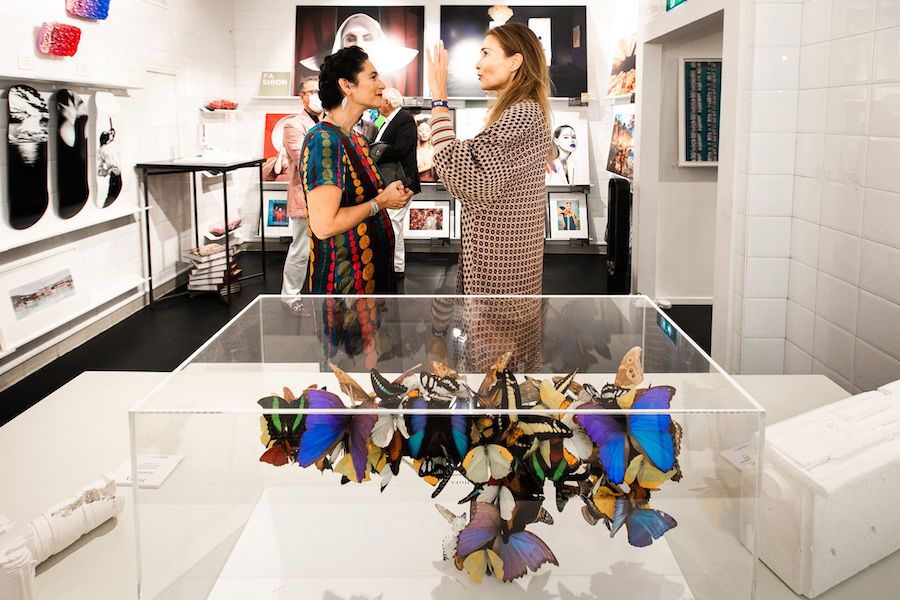 House of Fine Art and Rainbow Art and Design are hosting an ongoing exhibition at the YellowKorner gallery in Monaco, featuring well-known artists such as Damien Hirst. Zhuang Hong Yi and Bran Symondson.
Looking for a fun and fabulous gift or something incredible to add to an art collection? Look no further than YellowKorner in Monaco where some off-beat contemporary art is up for grabs by some of today’s best-known artists.
The exhibit, a collaboration between House of Fine Art (HOFA) and Rainbow Art and Design, came about as a result of HOFA’s interest in finding a foot hold in the Monaco market. The two entities recently held a pop-up event that sparked a lot of interest, cementing the two as synergistically compatible.
The kick-off to the collaboration was a glamorous cocktail event held during the week of the Monaco Yacht Show in September. The event was well attended by a number personalities including Leonidas and Iro Kambanis, Konstantinos Tsouvelekakis, Rita and Stavros Xenakis, S. Vuckovic, Irene Mayer, Anna Vissi, and Monaco Life publisher Eric Brundage.


Some of the highlights of the collaboration include Bran Symondson’s ‘Beat of a Wing Draco’, ‘Mini Flowerbed’ by Zhuang Hong Yi and ‘Untitled’, a 2009 piece by Damien Hirst.
Other featured artists include Mary Ronayne, Daniel Arsham, Robert Longo, and Florian Eymann.
HOFA specialises in contemporary art by established and emerging international artists and features a multitude of artistic disciplines with an intent focus on exceptional talent, diversity and cultural relevance. The gallery represents acclaimed painters, sculptors, photographers, and multidisciplinary artists from all over the world including those from China, Korea, America, Italy, France, Argentina and Australia.
Since its inception in 2012, HOFA Gallery has provided government institutions, museums, art galleries and private collectors access to some of the most sought after and collectable works of contemporary art.
YellowKorner Gallery is located at 1 Avenue Henry Dunant and their website is www.rainbow-art-design.mcfor more information.