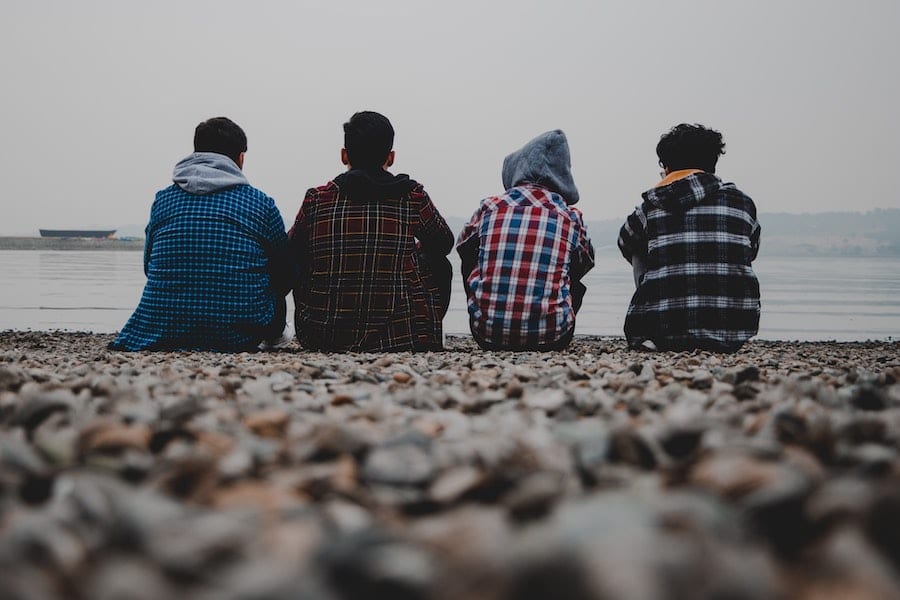 Health authorities in Monaco are encouraging young boys to take advantage of the free HPV vaccination and help limit the risk of cervical cancer in women.

Human Papillomavirus (HPV) infections are easy to catch and are the cause of most cervical cancers in women.

Vaccination and screening are the two most effective ways to combat cervical cancer, and vaccinations are already recommended for young girls in the Principality between 11 and 14 years of age.

But HPV can be spread from males to females, through any skin-to-skin contact in the genital area, therefore health authorities also recommend that boys be vaccinated.

Vaccinating boys protects unvaccinated girls and women from infection and therefore the risk of uterine and vulvar cancer.

According to the latest recommendations from health authorities, HPV vaccination is recommended from the age of 11 for both girls and boys. It is administered in two doses spaced six to 13 months apart. These two intramuscular injections are necessary for effective protection.

“The vaccine against Human Papillomavirus (HPV) is not compulsory, but it is strongly recommended for young girls and young boys,” said the government in a statement on Tuesday.

The vaccinations are available from a general practitioner, a paediatrician or a gynaecologist and are covered up to 80% by Monaco health insurance funds.

The Prince’s Government covers the remaining 20%, as part of the current vaccination campaign for people who do not have mutual or complementary insurance.

Photo by Amir Hosseini on Unsplash

Philanthropist couple Angela and Jean Garavagno have presented the Princess Grace Hospital with a cheque of €2 million.

SBM chefs are tantalising the tastebuds of those less fortunate, creating over 300 three-course lunches to be distributed by Monegasque charity Solidarpole.

IMSEE has provided a clear snapshot of the health and mortality impact of Covid-19 in 2020 on the Principality in a comprehensive new report.

After a sluggish start, France's vaccination rollout has hit full speed and is reaching new highs. So, how does it compare to Monaco?

France has opened up last minute next-day appointment slots for all people over 18-years-old in an effort to speed up the vaccination programme and cut down on wastage.

Health authorities have taken stock of the progress of a new psychiatry day centre for youth in Beausoleil. The much-needed establishment is due for completion by next September.

Through the hard work and generosity of three local organisations, the Fréres Saint-Joseph school in Beirut has been able to reopen its doors to 300 students.

Lifestyle & Wellbeing Cassandra Tanti - October 23, 2019
There is no greater joy, in my opinion, than to sit at a table and have laid out before you a seductive array of dishes, each intended to take you on a culinary journey through the exquisite Mediterranean.     Such is the experience at Ômer, Alain Ducasse’s exciting new restaurant in the Hôtel de Paris. With the added expertise of Head Chef Patrick Laine, Ômer offers an exquisite experience that combines the simple pleasure of sharing a meal with the sophistication of fine dining. There is no doubt that Mediterranean cuisine is a tired genre throughout Monaco and the French Riviera. But Italy, France and Spain alone do not make up the Mediterranean. Turkey, Lebanon, Libya, Morocco, Israel … in all 21 countries border the Mediterranean Sea, and each has its own culinary fingerprint. And, in his typical visionary way, Alain Ducasse has displayed many of these in the menu at Ômer. The meze selection, which must form part of any visit to the restaurant, is an ode to the classics: delicate vine leaf dolmas, chicken Briouate, smokey aubergine dip with garlic, an amberjack carpaccio served on hummus … each is perfectly spiced and expertly finished. Then the surprise: the chef’s interpretation of the classic Spanish favourite patatas bravas. In a unique twist, feathery potatoes serve as a vessel for a creamy, smoky, paprika filling. It is one of those rare occasions where the interpretation may just be better than the original. [caption id="attachment_39591" align="alignnone" width="900"]

Chef Patrick Laine ©pmonetta[/caption] The dish gives us an opportunity to understand more about chef Patrick Laine. In 1997, after completing his military service in the kitchens of the Ministry of Interior, Patrick began his first position in one of Ducasse’s restaurants, as a commis at the flagship Louis XV. From there, he moved on to Le Grill (also in the Hôtel de Paris) and La Trattoria at the Sporting Monte Carlo. When Ômer first opened in the rotunda of the newly refurbished Hôtel de Paris in January, Patrick was a natural choice to head the kitchen. “It was a new challenge,” the chef tells me as we sit in the luscious garden created by Jean Mus. “I am used to cooking Mediterranean cuisine, but I wanted to explore all of the different countries of the Mediterranean, not just France, Italy and Spain.” [caption id="attachment_39590" align="alignnone" width="900"] 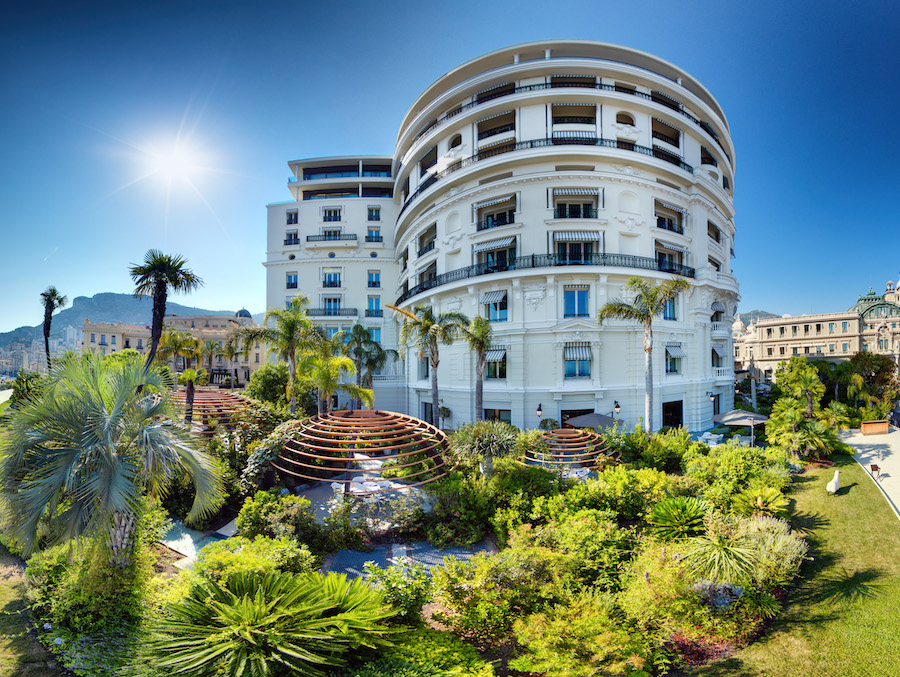 Ômer terrasse[/caption] “So,” I ask, “how does a classically trained French chef approach the difficult task of balancing the spices of southern-Mediterranean cuisine such as cardamom, ras el-hanout and cumin?” “I am always researching, learning from the locals who visit Monaco, and tasting,” he responds. “Then I adapt the dishes according to my palate, adding more lemon if I think it needs more acidity, for example, or more salt, less sweetness.” He also had the opportunity to learn from the culinary Grecian icon Dina Nikolaou, who starred as the venue’s first guest chef during a four-day Greek feast this summer. Her influence was so formidable that three of her dishes have been permanently written into the menu. “Dina’s philosophy of elevating traditional Greek cuisine is in line with what we do here,” says Patrick. “Fresh produce created under the sun, made for sharing. It is generous, simple cuisine.” [caption id="attachment_39588" align="alignnone" width="500"]

Mezze selection at Ômer ©pmonetta[/caption] That simple happiness in sharing a meal is not only reflected in the mezes. Meat skewers are grilled at the table, an entire octopus is suspended and snipped in front of guests, and fish is deboned and served whole, perfect for sharing. I try the chef’s signature chich taouk cockerel, roasted with chilli and paprika and served with perfumed rice. My lunch guest lets me sample one of her favourite dishes, manti tadbilé, a traditional lamb ravioli served with a yoghurt sauce and a spiced tomato syrup. Both are delicious. [caption id="attachment_39586" align="alignnone" width="500"]

Coquelet chich taouk ©pmonetta[/caption] Complimenting the traditional flavours of each dish are the plates upon which they are served: bright ceramics, classic marble, traditional copper, with touches of blue echoing the Mediterranean. The chef’s favourite dish, if he had to choose one, is the charwarma lamb with fattouch, cooked on the spit. I wish I had the capacity to order this one too. But alas, that one will have to wait upon my return. After our generous first two courses, there is only one dessert I can possibly order - the confit lemon (from Menton) filled with refreshing basil and lemon sorbet. It is the perfect way to end this meal. [caption id="attachment_39585" align="alignnone" width="500"]

Confit lemon dessert ©pmonetta[/caption] But we are also treated to the hazelnut and chocolate baklava and, despite our bulging bellies, somehow manage to devour that also (the sickly sweetness of a traditional baklava is no-where to be found in this Dina Nikolaou original). It is easy for me to get swept up in the food. Alain Ducasse and Patrick Laine have impressed me with their restraint, respect for tradition, and touches of individuality. But I can’t fail to mention the wine. Head Sommelier Mathias Negro has done a fine job of sourcing an interesting array of Mediterranean wines, which my server confidently proposes. I try a crisp white Lebanese white to start; a full-bodied Israeli red to finish. [caption id="attachment_39587" align="alignnone" width="900"]

Head Sommelier Mathias Negro, Head Chef Patrick Laine, Director Michel Lang and Pastry Chef Dorian LUTZELSCHWAB_OMER_2018©pmonetta-7608[/caption] In fact, wine is a prominent feature at Ômer, as it is in the Hôtel de Paris itself. There is an eye-catching ‘Wine Circle’ featuring a selection from the mythical cellar of the Hôtel de Paris Monte Carlo (which has over 350,000 bottles), including the absolute essentials from Burgundy, the Rhône Valley and Bordeaux, as well as rare crus from the likes of the Aegean Sea, the slopes of Mount Bargylus in Syria, and Andalusia. [caption id="attachment_39593" align="alignnone" width="514"] 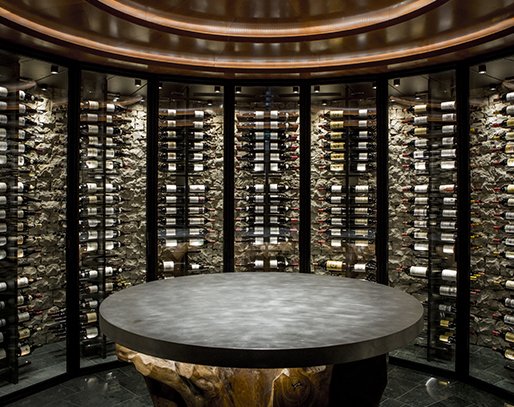 The 'Wine circle'[/caption] At the heart of this space is a tasting table where wine lovers can gather and sample the selection, to be enjoyed over, of course, the mezes. Apero will never be the same again. Combined with a décor designed by Pierre-Yves Rochon, reminiscent of a luxury cruise ship with its use of wood, light-coloured leather and brushed bronze, Ômer invites guests to travel the Mediterranean Sea without ever having to leave the luxurious comforts of Monte Carlo. My only advice before entering: make sure you go on an empty stomach.

Lifestyle & Wellbeing Stephanie Horsman - March 26, 2020
The government has added psychologists to the team at Monaco’s Covid-19 call centre as a growing number of people seek advice on how to cope with isolation and fear.