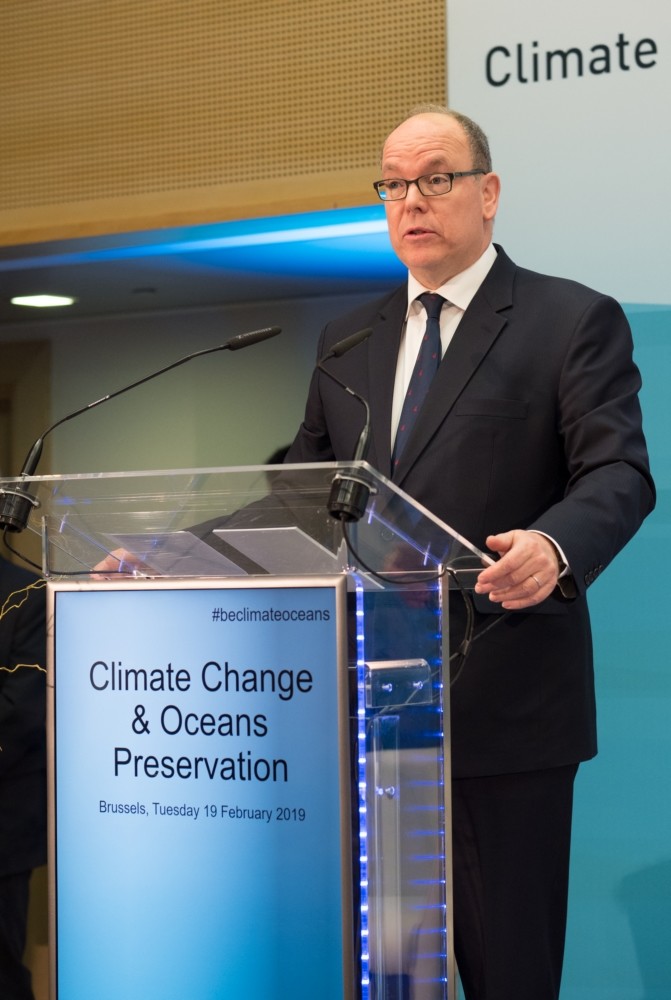 On 19 and 20 February 2019, HSH Prince Albert II travelled to Belgium for a diplomatic, environmental and cultural visit.

In Brussels, at the Berlaymont building, late Tuesday morning, 19 February, Prince Albert met with Jean-Claude Juncker, President of the European Commission, and his staff in the presence of HE Ms Sophie Thévenoux, Ambassador, Head of Mission of Monaco to the European Union, Mr. Gilles Tonelli, Counselor-Minister of Foreign Relations and Cooperation and Ms. Anne-Marie Boisbouvier, Counselor in the Cabinet of HSH the Prince.

The Sovereign Prince and Mr Juncker discussed the progress of the negotiations, started in March 2015, on the Association Agreement between the Principality and the European Union, which would offer Monaco a stable institutional framework for its relations with the institutions.

European countries and the member states. It would also open up opportunities for cooperation in teaching, research or other shared areas.

The Prince recalled the importance he attaches to the conclusion of a balanced Association Agreement that respects both the main principles of the European Union while preserving the vital interests of Monaco, thus guaranteeing the legitimate continuity of the Principality.

This ambition gives a strong political signal respecting the Monegasque identity.
If such an agreement were reached in June, it would be a crucial step in the drafting of the eventual Association Agreement.

In his speech, the Sovereign Prince said: “I want to believe that we will come together, to develop an Association Agreement that respects the interests of each. I very much hope that taking into consideration the specificities of Monaco will allow an association with the European Union, whose motto is Unie dans la diversité.”

As part of his environmental work, the Sovereign Prince participated in a high-level Conference on Climate Change and Ocean Conservation on 19 February in the early morning at Egmont Palace.

In his speech, Prince Albert warned of the dangers of the progressive depletion of land resources and the growing importance of the oceans.

Organised jointly by Marie-Christine Marghem and Philippe de Backer, this conference focused on three themes: climate change and the impact on the biodiversity of the oceans, oceans and energy, and reducing the greenhouse gas emissions of ships, where many personalities have spoken, such as Mrs Brune Poirson, State Secretary to the Minister for the Ecological and Solidarity Transition, Mr Karmenu Vella, European Commissioner for the Environment, Maritime Affairs and Fisheries or Mr. Denis Allemand, Director of the Monaco Scientific Center.

That same day, HSH the Prince also participated in the CDP Europe Awards 2019 at the Brussels City Hall where he was welcomed by the Mayor Philippe Close.

During this event, the Sovereign recalled His personal commitment for more than 25 years in the field of the Environment, the actions He has led through His Foundation for more than 10 years and the commitment of His Government for the implementing sustainable solutions that promote energy transition, sustainable mobility and the promotion of renewable energies.

The CDP (formerly Carbon Disclosure Project) is an organization that analyzes companies’ performance on three key topics – climate protection, sustainable water management and the fight against deforestation – and grades from A to D.

The following day, Tuesday, February 20, HSH Prince Albert II visited the Hergé Museum in Ottignies-Louvain-la-Neuve before attending a masterclass of the French cellist Gautier Capuçon and a masterclass of singing at the Queen Elisabeth Music Chapel (Waterloo).
The Sovereign Prince later visited the Folon Foundation; museum located in the farm of the Castle of Hulpe and created in 2000 by Jean-Michel Folon.

This visit highlights the strong links that continue to unite the Belgian artist with the Principality. The Monegasque landscape is today still adorned with poetic works by the sculptor who worked in Monaco for 20 years; The Folon Foundation recently opened the Atelier Folon, located on Quai Antoine Ier, to the public.