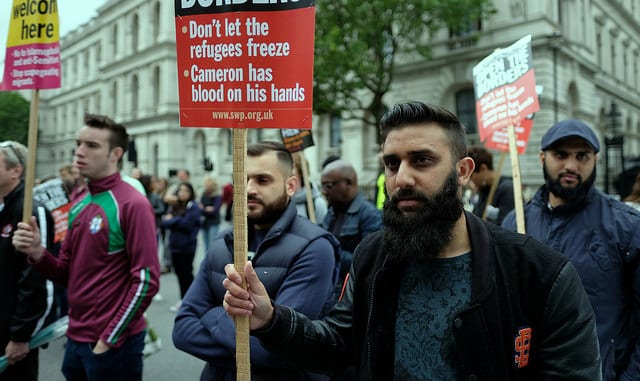 Anyone thinking of driving to the UK next week may have to change plans, after shopkeepers, businessmen, farmers and police unionists in Calais pledged to block “indefinitely” the motorway leading to the port with a “human chain”, saying they will not break it until the migrant Jungle camp that has now swollen to up to 10,000 people is totally dismantled.

The unprecedented action, due to start on Monday, came as the local head of France’s national haulage federation warned: “Migrant violence hasn’t gone up a notch, it’s gone up 10 floors.”

Lorry driver representatives issued a joint call with an umbrella group of shops and businesses in Calais, the CGT union, farmers and the SCP Police union, saying that they had run out of less militant ways of calling a “halt to insecurity in Calais”.

“What we want is a date for the dismantling of the northern part of the Jungle,” said Frédéric Van Gansbeke of le Grand rassemblement du Calaisis, a group representing local Calais residents. “We will not move until we get a date [for its removal],” he told La Voix du Nord, the local newspaper, calling the blockage “indefinite”.

Starting on Monday at 7 am, the different groups will unite to block the A16 motorway in a “snail” operation to block traffic. They have called on local Calais residents to join them to form a “human chain” starting at the Epopée stadium and moving to the A16.

Mr Van Gansbeke said they were “changing tack” after the state showed it was “safeguarding the migrants and not shopkeepers, port workers, hauliers, tourists and farmers”.

The group called on locals to “take the day off” and join them.

“We haven’t slept for the past six months due to migrants crossing our properties,” said Xavier Foissey, a farmers’ representative.

David Sagnard, local head of France’s national haulage federation, said: “Must we risk our life on the motorway just doing our job of haulier, by being a tourist or simply a Calais resident or policeman?”

Alliance, the French police union, said its officers were no longer able to cope with increasing disorder in the migrant camp. “The French police are not the gate guards of the English,” said Jean-Claude Delage, head of the Alliance.

“Our force is just receiving blows. This has to end,” he told Le Figaro newspaper.

Gangs of armed people-smugglers operating around Calais have started systematically forcing lorries to stop before they reach the port so migrants can break in. Philippe Mignonet, deputy mayor of Calais, has described the main route to the port as a “no-go area” between midnight and 6am.

The motorway is regularly blocked with felled trees and debris by masked smugglers, often brandishing large sticks and sometimes knives. French police responded to mounting political pressure by rushing 140 additional officers to the area this weekend.

The leader of the northern France region said that the border deal should be scrapped unless Britain agreed to the changes. Xavier Bertrand, president of the Hauts-de-France council, called for the creation of a so-called hotspot in the Calais area where migrants could apply for asylum in Britain.

About 200 migrants from Calais are making it across the Channel in lorries every week, French officials and security sources said over the weekend.

The estimate – equivalent to more than 10,000 illegal migrants arriving each year –represents a surge in the number of so-called “lorry drops”, when migrants hiding in the back of goods vehicles jump out after safely reaching the UK.  (Sources: Le Figaro, Daily Telegraph, La Voix du Nord) 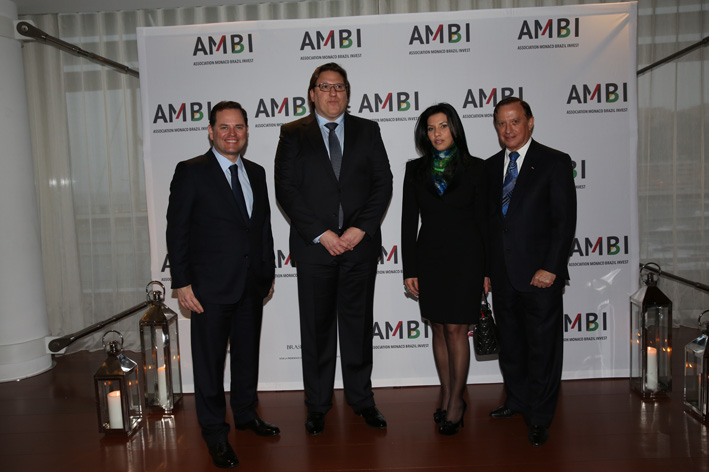 AMBI Founders: Arnoldo Wald Filho, President of AMBI in Brazil and Honorary Consul of Monaco in Brazil, Marcos Pileggi, President of AMBI in Monaco, Luciana de Montigny, Secretary General of AMBI and President of Brasil Monaco Project and André de Montigny, President of Honor of AMBI and Honorary Consul of Brazil in Monaco.[/caption] The Association Monaco Brazil Invest (AMBI) is holding their second year anniversary event on March 23 at the Monte Carlo Bay Hotel. AMBI, a bilateral association of commercial economic and financial cooperation between Monaco and Brazil launched in 2015, has invited two distinguished speakers on Thursday. “Each year we chose a unique subject,” Marcos Pileggi, President of the non-profit AMBI, told Monaco Life, “and this time we are presenting Monaco and data protection of the cloud.” Two speakers will address guests at the invitation only event. Dr Renato Opice Blum, Digital Law Professor at Insper, will talk about “Cloud and its business in Monaco: Trends and Opportunities within a Data Protection Framework”. This will be followed by “Monaco Law and Regulatory Panorama in Regards with Data/IT Protection in Business”, delivered by Richard Mullot, Vice-President of the Monaco Bar, and former President of the Bar. “Monaco is the safest country in the world for people, why not for data?” Mr Pileggi suggested. Each country, and indeed each state within the US, has different legislation regarding data protection. Just last month, Javelin Strategy & Research stated an estimated 15.4 million American consumers - or nearly 1 in every 16 - were victims of ID theft last year up. This figure is up from 13.1 million in 2015. The Javelin report opened with “2016 will be remembered as a banner year for fraudsters, as numerous measures of identity fraud reached new heights”, confirming fraud losses totalled $16 billion. AMBI, which officially launched at the Monaco Yacht Club in March 2016, promotes and develops multilateral links between Monaco and Brazil, focusing on Monaco as a hub of international business and investment exchange. The conference this week is in collaboration with the Monaco Economic Board and sponsored by Powers Properties. The official partners are Monaco Asset Management and CMB Bank. Working closely with the Brazilian Consulate in Monaco and the Monaco Consulate in Brazil, AMBI looks to build networks and create opportunities for members with introductions to prestigious personalities, and provide “Complementary Activities” with other organisations, such as Brasil Monaco Project and the Monaco Economic Board. Memberships are divided into four categories: Patron, Corporate, Individual and Institutional. The new AMBI website will be launched later this week, in conjunction with the second anniversary conference on Thursday. [caption id="attachment_13976" align="aligncenter" width="709"] 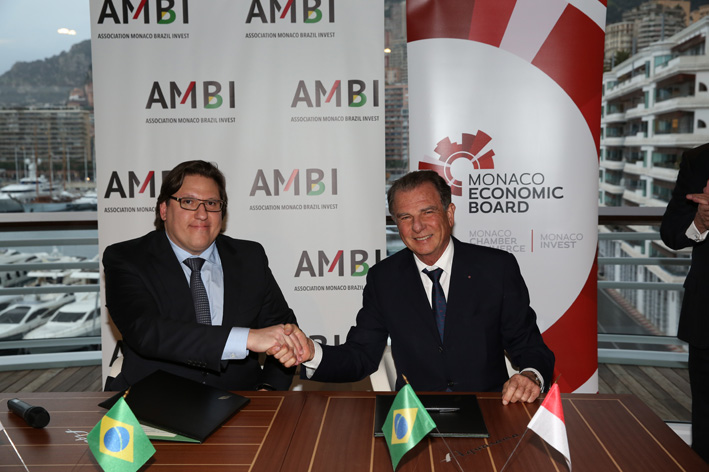 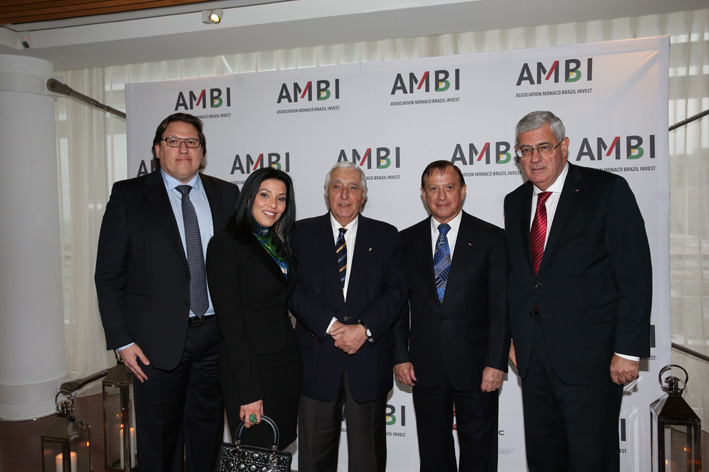 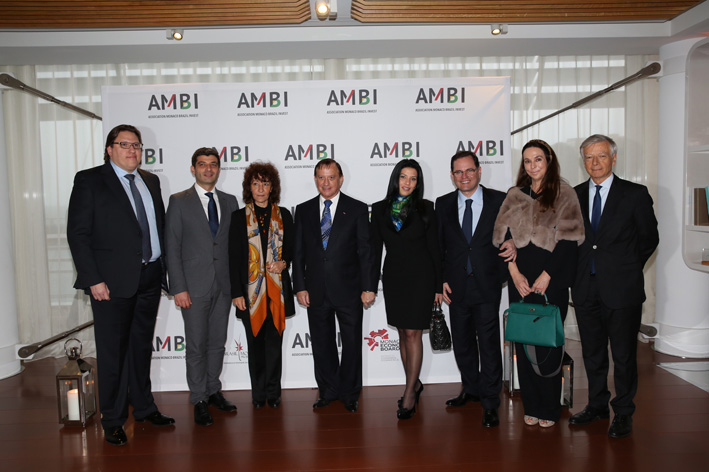 Two more German banks are to introduce negative interest rates for clients with large deposits. From April 1, Stadtsparkasse of Munich will introduce a negative rate of 0.4 percent for customers with balances of €100,000 and more and Volksbank of Hamburg is introducing a negative rate of 0.2 percent on balances of more than €500,000. Deutsche Skatbank introduced negative rates in 2014, followed by Raiffeisenbank Gmund last August. The European Central Bank is currently holding hundreds of billions of euros for banks, and lowered its deposit rate to -0.4 percent from March 2016 to encourage banks to keep their money invested in the real economy. In France, the law currently does not allow for negative interest rates, but many banks are hiking their charges and charging commissions and account-holding fees for those with large balances to find a way around the rules. However, customers with more modest accounts can also expect to be caught up in higher bank charges. READ ALSO: Suspected of fraud at Credit Suisse, banker arrested READ ALSO: HSBC shutting down Monaco private bank, clients to transfer to CFM Indosuez