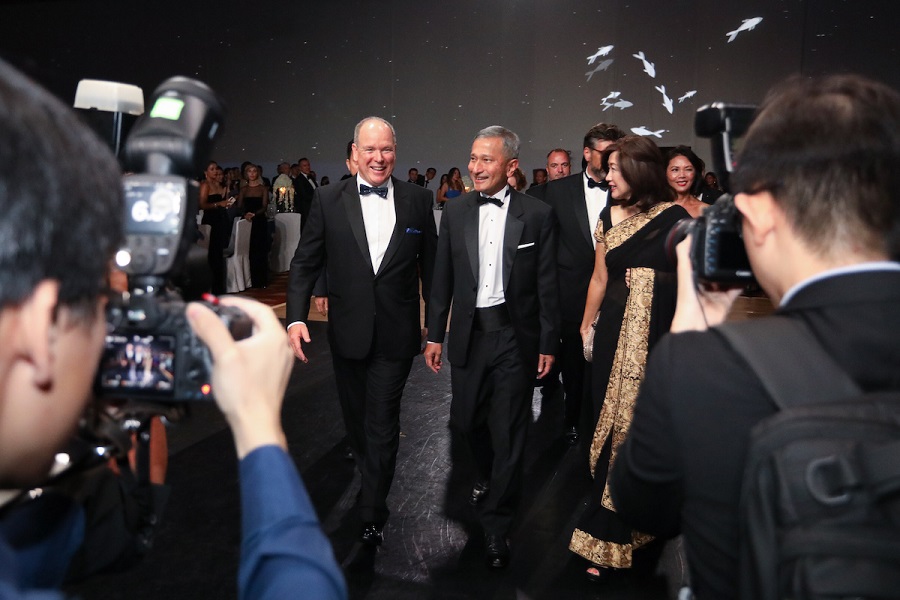 Prince Albert II and a cast of nearly 600 guests have raised an outstanding 1,600,000€ for ocean conservation at a themed ball organised by the Prince Albert II Foundation’s branch in Singapore.

The Marina Bay Sands in Singapore provided the backdrop for a glittering charity event put on by the Asian wing of the Prince Albert II of Monaco Foundation (FPA2) on Monday night. The décor and theme mirrored the ocean, with marine protection the main focus of the evening.

Prince Albert himself was in attendance as was Vivian Balakrishnan, Singapore’s Minister of Foreign Affairs and the FPA2’s guest of honour, who made a speech thanking the Prince and his Foundation’s local president, Jacky Deromedi, for all their work in the service of the environment.

The night was filled with entertainment including a performance by Singaporean superstar Hossan Leong and a pas-de-deux where Singapore Ballet dancers mimicked the movements of sea creatures. Additionally, French clothing designer Anne Fontaine held a fashion show to the delight of all.

The dinner menu was no less special, created by New York-based celebrity three-star chef Daniel Boulud, who put together a magical meal following the ocean theme and eco-friendly spirit of the night.

The charity auction raised an astounding 1.6 million euros (2.3 million Singapore dollars) and included such treats as an FP Journe Chronomètre Optimum watch specially created for the event, exceptional rubies by Faidee, a work of art by Marcos Marin, a ring by Alberto Vitale, stays at the Four Seasons and other leading hotels of the world, an Akar De Nissim table, an Anne Fontaine Haute Couture gown, and a special Martell Cognac created for the new year of the Chinese Zodiac.