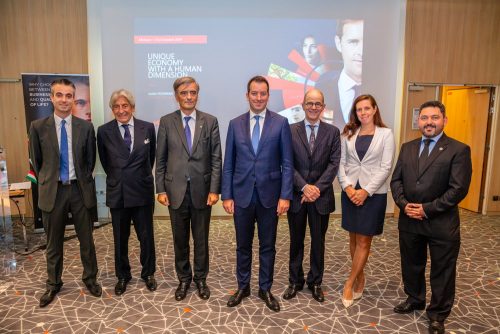 Monegasque entrepreneurs have had the opportunity to learn about business opportunities arising from the Principality’s collaboration with Hungary at a meeting organised by the MEB.

Held at the Novotel on Monday 21st October by the Hungarian Embassy, the Monaco Economic Board (MEB) aimed to give targeted entrepreneurs in Monaco access to high-level contacts.

With GDP increase of 5% in 2018, a shrinking public deficit, a competitive tax regime (9% corporate tax rate, lowest in the European Union, income tax at 15%) and almost-full employment for its population of 10 million, Hungary presents as a country on the rise, boasting remarkable macroeconomic stability, as underlined by Róbert Ésik.

To maintain this momentum, the country has set a target to post growth rates 2% higher than the European average over the coming years. Róbert Ésik highlighted sectors that are expanding such as the car industry (AUDI, Mercedes, BMW, Suzuki), R&D (Samsung has just built a factory) and artificial intelligence notably for self-driving cars.

Edina Nagy drew attention to Hungary’s rich heritage, which includes the oldest metro in Europe and numerous UNESCO World Heritage sites. Dubbed “Pearl of the Danube”, Hungary is keen to promote its cultural and culinary diversity.

After the presentations, entrepreneurs had a chance to sample Hungarian wines and attend an official evening in honour of Hungary’s National Day, organised by its Honorary Consul in Monaco who paid tribute to his country’s film industry.

The future of tourism in Monaco

Business & Finance Cassandra Tanti - December 3, 2021
Guidelines for a sustainable tourism sector in Monaco have been outlined in a new White Paper, developed in consultation with the government and tourism professionals.