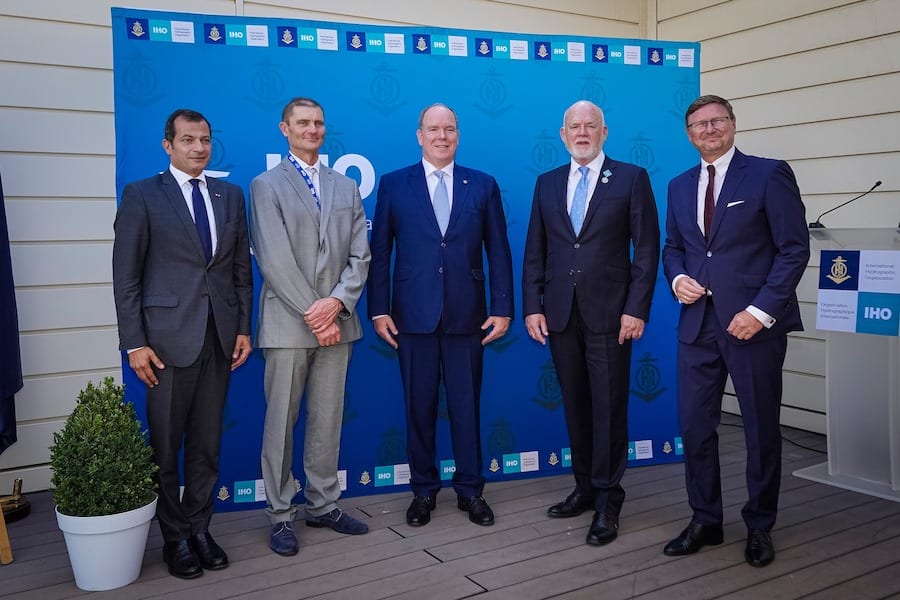 Prince Albert joined the International Hydrographic Organisation for its 100th anniversary celebrations on Monday, an entity that his great great grandfather founded.
Founded on 21st June 1921 by Prince Albert I, the International Hydrographic Organisation (IHO) has grown to encompass 94 member states whose main goal is to ensure that the world’s seas, oceans and navigable waters are properly surveyed and charted, creating international standards followed by all sailors.
As part of the centennial celebrations, Prince Albert II was joined by Dr. Mathias Jonas, Secretary General of the IHO, Engineer General Laurent Kerléguer, Director General of the French Hydrographic and Oceanographic Service (SHOM) and Peter Thomson, UN Special Envoy for the Oceans where they broadcasted live on YouTube on the IHO channel.
Italy sent the flagship of the Italian navy, the Amerigo Vespucci, which is currently being used as a training vessel for cadets.
In addition to looking at their illustrious past, the celebrations looked to the future, demonstrating modern technologies being used to get hydro-oceanographic data, such as drones and autonomous vehicles which will deployed from the Principality.
iXblue demonstrated the Drix, a 7.7 metre autonomous surface vehicle capable of being run either by remote control or through completely autonomous operations in supervised mode.
The ECA group then presented the A18D autonomous underwater vehicle (AUV) on the Port Hercule seawall in Quai Rainier III. The A18D is 5.5m long, has a range of 24 hours, can reach speeds of 6 knots and can operate at a depth of 3,000m.
ECA and iXblue had stands offering technical information with video support on the quay in front of the Amerigo Vespucci.
Access was free and open to the public, and staff were on hand to answer questions and exhibit new seabed mapping strategies, as well as show how the autonomous vehicles collect data.
Meanwhile, a webinar was held focusing on the future of hydrography with talks from representatives from IHO member states and industry partners including Dr. Geneviève Bechard, Director of the Canadian Hydrographic Service and President of the IHO Council, Bjorn Jalving, Senior Vice President for Technology at Kongsberg, Emma Wise, Sales Director at SevenCs / ChartWorld International and Dr. Peter Heffernan, Ambassador for the Ocean, former CEO of the Marine Institute Ireland.
The IHO enjoys observer status at the United Nations, where it is the recognised competent authority on hydrographic surveying and nautical charting. When referring to hydrography and nautical charting in Conventions and similar Instruments, it is the IHO standards and specifications that are normally used.