Inauguration of the new underground pedestrian access at Monaco Station 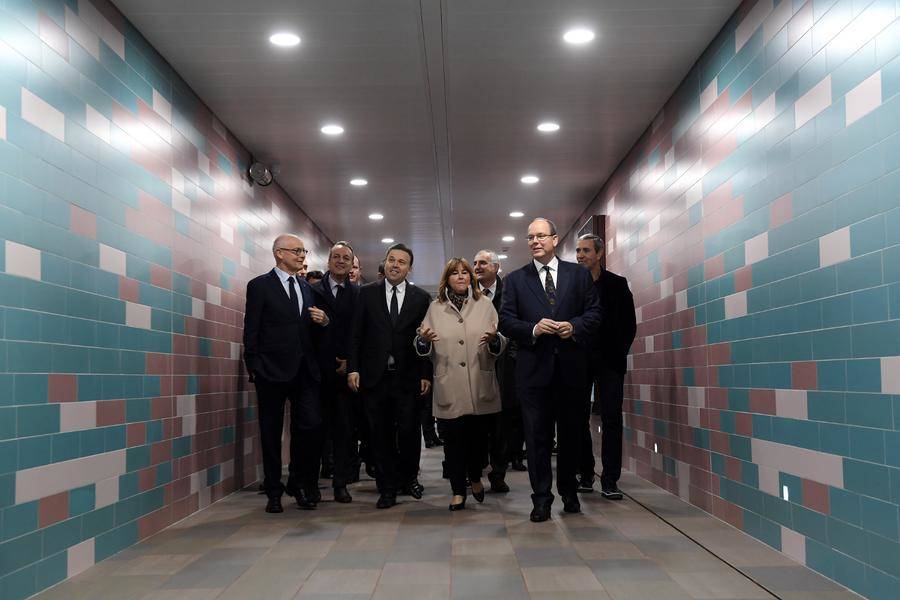 This new pedestrian gallery was inaugurated by HSH the Sovereign Prince in the presence of HE the Minister of State Serge Telle, Marie-Pierre Gramaglia, Government Advisor-Minister of Equipment, Environment and Urbanism, Stéphane Valéri, President of the National Council, Mayor Georges Marsan, and Patrick Dubief, Monaco Station Manager.

Started in January 2017, the work of this 80-meter link lasted nearly two years, for a budget of 10 million Euros. This is an important work in this underground station already meshed by multiple access to the neighborhoods of Fontvieille and Condamine.

As Marie-Pierre Gramaglia pointed out during her speech, “This gallery aims to reduce the pedestrian traffic at the exit of the station, on the crossing of the Sainte Dévote bridge, traffic which has the effect of slowing the flow of motor vehicles especially during rush hours in the morning and evening.

Remember that the station of Monaco is the second most popular of the Côte d’Azur after Nice, counting each year 6.7 million trips, against 2.3 million in 1998.

Meeting with the Secretary-General of the Minister of the Interior and Decentralisation. Photo: DCI/Facebook Gouvernement Monaco[/caption] The first official meeting within the civil protection consultation framework agreement between Monaco and Mauritania took place last week in the Maghreb region of western Africa. Representing Mauritania were the Ministry of Foreign Affairs, the Ministry of Finance, and the Ministry of the Interior and Decentralisation. Monaco was represented by the head of the fire brigade, the Honorary Consul and representatives of the Directorate for International Cooperation. The meeting on October 25 followed the signing of the agreement in July this year. On that occasion, the Monegasque delegation was led by Isabelle Rosabrunetto, Director General of the Department for Foreign Affairs and Cooperation, who was received by the highest Mauritanian authorities. Cooperation between the two countries in the field of civil protection, initiated by Monaco’s fire service, has been in place for the past 20 years. Diplomatic relations between Monaco and the Islamic Republic of Mauritania, which borders Algeria, Senegal and Mali, was officially established in 2011, although Mauritania has also been a country for priority cooperation and aid by the Monaco government since 2002.

Photo: Direction de la Communication[/caption] Thanks to the generosity of GEMLUC, the Monaco business group united in fighting cancer, which raised €150,000 during its "Euros of Hope" evening on October 13, Princess Grace Hospital has acquired very special coelio-3D surgical equipment. Presented by Dr Maurice Chazal on Wednesday, December 14, in the presence of CHPG Director Patrick Bini, this state-of-the-art equipment will allow extremely precise surgical operations thanks to three-dimensional imaging and will be used in particular for cancer and gynecological surgery. It is, to date, the only item of 3D coelio-surgical equipment on the Côte d'Azur. Three-dimensional imaging is suitable for surgical interventions requiring extreme precision and a very good perception of space. It also provides relief viewing and facilitates better eye-hand coordination, as well as enabling surgical procedures under laparoscopy to be performed with even more precision, speed and efficiency. For the patient, too, the advantages of this advanced technology are multiple, often enabling surgery to be considerably less invasive.