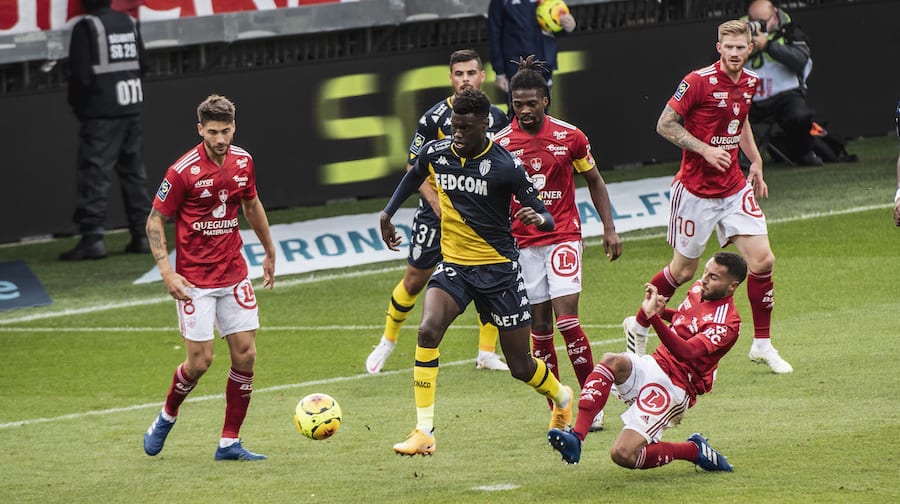 Short several players, AS Monaco held the fort, but not enough to take home the win in their match against Brest on Sunday.
It reads like a laundry list of the team roster: Golovin, Henrique, Ballo-Touré, Maripan, Disasi and Tchouameni. All of these players were out of action for Sunday’s Ligue 1 match against Brest at the Stade Francis-Le Blé.
The first four were suffering injuries and therefore unable to play and the last two were side-lined due to suspensions. The suspended players were a particular blow as both Disasi and Tchouameni have been regular starters since the beginning of the season.
Nonetheless, the Red and Whites carried on using Coach Kovac’s 4-3-3 traditional line up, allowing for some Academy defenders game time alongside more seasoned players. Gelson Martins played left wing, Sofiane Diop took midfield and Guilian Biancone covered left back.
Brest came out strong from the start, living up to their determined reputation. This was made crystal clear from the opening goal, which came at only eight minutes in and was made by Romain Faivre, a former graduate of Monaco’s Academy.
Monaco was nearly caught off-guard just minutes later with a run by Steve Mounié, though fast action by Benjamin Lecomte thwarted the effort.
Gelson Martins nearly evened up the game with a shot that was mere centimetres wide of posts, giving goalie Gautier Larsonneur a fright. After these exciting moments, it was mainly a power struggle between two teams not willing to give the other an inch. Monaco had possession 60% of the first half, but sadly weren’t able to convert that into a score.
In the second half, Coach Kovac brought in Florentino Luis, a new recruit to the team from last summer’s transfer window, to keep an eye on the midfield. The Brestois came out in this half much as they had in the first, though Monaco did an excellent job defending the ball and despite there being much volleying and shots on goal, no more points were scored. In the end, the final was 0-1 for Brest.
“I came away from this match frustrated,” Coach Kovac said after the game. “It is true that we did not start well, but then we had possession and a lot of chances. We were too passive and not aggressive enough at the start of the match. We then changed our behavior by being much more active with and without the ball. But 15 minutes can be enough to lose a match, and it will be necessary to react after the break against Montpellier.”

Monaco returns to action against Montpellier on 18th October at home at Stade Louis II.