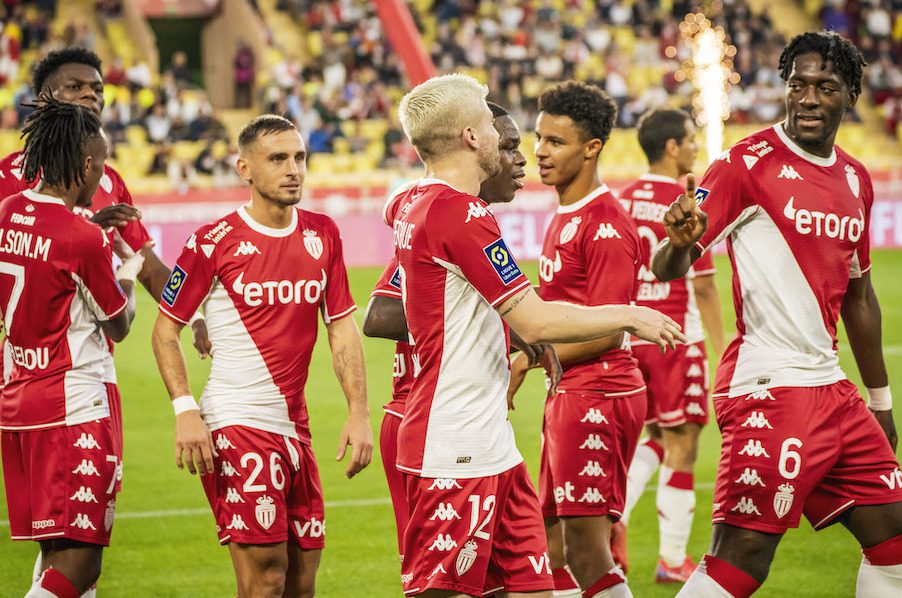 AS Monaco produced a dominant first-half display to ensure a comfortable victory against a lacklustre Montpellier side at the Stade Louis II on Sunday.
Coming into the match high on confidence after a battling victory away at PSV in midweek, ASM got off to a blistering start.
Having dominated possession and territory during the opening minutes, ASM didn’t take long to convert their dominance into tangible rewards.
Building on his man-of-the-match performance in mid-week, Caoi Henrique was once again the provider – his ball across goal finished neatly by Kevin Volland.
Montpellier couldn’t muster any response to going behind. ASM continued to dominate possession, and their persistent pressing kept Montpellier deep in their own half. Only five minutes after the opener, ASM doubled their lead. This time the scorer of the opening goal, Volland, turned provider – his sumptuous out-side of the boot delivery converted by Ben Yedder at the back post.
Kovac’s men continued to dominate proceedings in the first-half, but lacked the incision to increase their lead against a passive Montpellier side.
Montpellier came out the brighter side at the start of the second half. They were more capable of retaining possession and advancing the ball, yet their defensive frailties were once again exposed with devastating consequences.
After a penalty-box scramble, which resembled a pinball machine more than a match of football, Gelson Martins seized upon the ball and drilled home Monaco’s third.
Having confirmed the victory, ASM let the game drift, and Montpellier slowly grew into the game. Despite failing to create anything clear-cut, Montpellier were handed a glorious opportunity to get back into the match when Pavlovic clumsily brought down Gioacchini inside the ASM box.
Savanier confidently dispatched the resulting penalty to register what was ultimately only a consolation goal for the away side.
The 3-1 victory lifts Kovac’s side to 8th place in Ligue 1, and only 1 point behind the European places.
In the post-match conference, Kovac praised his side’s reaction to last Sunday’s disappointment. “We are happy to have bounced back after Lyon, by having two good matches against PSV Eindhoven in the club’s 200th European fixture, and against Montpellier.”
Despite his positive appraisal, Kovac was nonetheless critical of ASM’s inability to kill off the game. “For me, we should have finished the contest in the first half by scoring the third, even the fourth goal… After the third goal, we changed the way that we played a bit, and when you play a bit lower, with less intensity, the opponent has more of a chance to grow, and you find yourself in trouble.”
ASM will be hoping to continue their charge towards the European places with a win in their next fixture at Brest next Sunday.