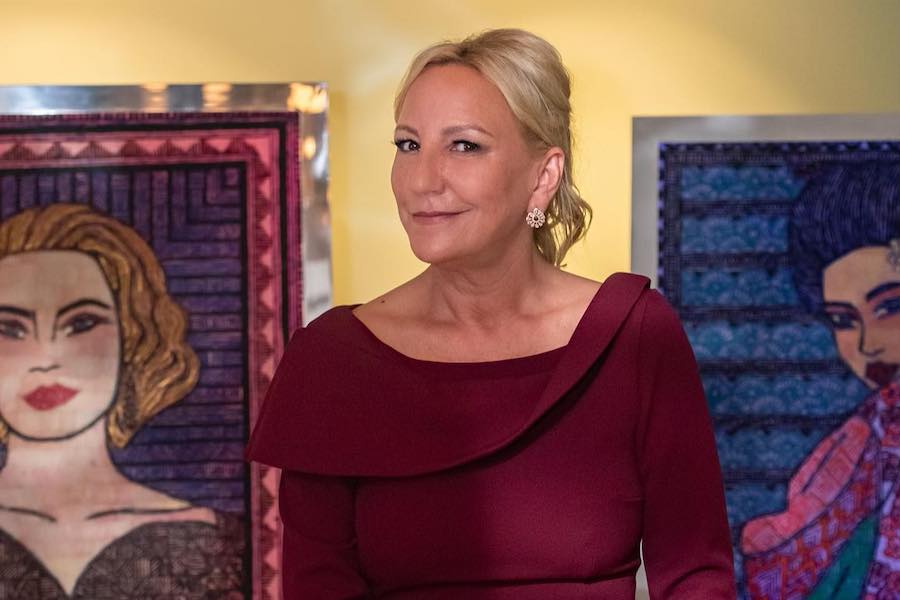 In an effort to step out of the shadow of her famous father, Ghizlan El Glaoui created a new style of art using backlight to give life to her portraits. Now, she’s taking that concept to the seas.

Born in Morocco in 1969, Ghizlan spent much of her childhood in the studio of her father – world renowned Moroccan artist Hassan El Glaoui. She was his muse, posing for portraits amidst the exotic surroundings of Morocco and France, inhaling all the history that had been set by her grandfather, the last Pasha of Marrakech, Thami El Glaoui.

Ghizlan actually credits Sir Winston Churchill for the path that she is on. The former UK prime minister had convinced her grandfather to send his son to study art in London after seeing one of the horses he had painted behind a desk. They were to become a defining feature in Hassan’s work, and he an inspiration for Ghizlan.

Today, Ghizlan El Glaoui paints portraits, mainly women, using vivid colours and metallic paints to capture the light, reminiscent of the glittering mosaics of the Byzantine Empire. She uses the ‘golden ratio’ technique, learned during her art studies at the Académie Charpentier, “the measurement you choose for perfection,” she tells me. “Leonardo da Vinci used it on the canvas before he would paint over it. I like the comfort of the mathematics behind the beauty, and I like the fact that I cannot get the proportions wrong.”

El Glaoui also uses backlights that shine through the canvas, the remote controlled warm and cold LED light filtering through the material to create a translucent effect.

“I did that because, being the daughter of a famous artist, I needed to invent something. People were saying, ‘your father is famous, let’s see what you can do’, as if – firstly, you are a woman, and secondly, you are attempting a career when your dad is in a museum, you will always be in his shadow.”

But, says Ghizlan proudly, she established her own way, and Hassan opened the doors that allowed his daughter to do portraiture in a heavily conservative, Muslim culture.

“In that particular culture, you’re not supposed to follow your creativity and passions. It’s very difficult for a woman to shine in this masculine world and I’m proud of making sure that women shine more than men (in my art),” says Ghizlan. “It is the beauty of a woman, the soul of a woman, the multi facets of a woman which I am fascinated by.”

The addition of light behind the canvas brings another dimension to her work, a bridging of modern and classic, an inner light and aura that gives life to her portraits, exposing the subject’s strength.

Among them is Princess Grace. “My favourite models are women that have succeeded in their life,” reveals Ghizlan. “Grace Kelly succeeded in Hollywood; she became the most prestigious artist in the world. And then there was the beautiful love story with Prince Rainier and her arrival here.”

Ghizlan is gifting the Grace Kelly portrait to Prince Albert, and he has promised to hang it in the Palace. She has also painted another member of the Grimaldi family – Charlotte Casiraghi, daughter of Princess Caroline. But it was commissioned by Gad Elmaleh, and then the couple broke up, so that portrait of the beautiful young Charlotte hangs in Ghizlan’s art room.

“When I go to a different country, I try to adapt to that country,” she says. “So, when I went to Madrid, I painted Toreros and flamenco dancers because I wanted the people of the country to feel that I was into them, not just my own muses.”

Monaco’s Princess Charlene is next on the list, says the artist: “She has a very sculptural silhouette, and gorgeous shoulders and neck.”

Today, it is also her new concept, ‘Art to Sea’, which has gathered us here at the private salon of La Môme, overlooking the Mediterranean. Art to Sea is similar to her illuminated paintings in that her canvasses are enhanced by light, only this time the canvas is a colossal sail, and the light is the natural sun that radiates through them. Images of a giant Brigitte Bardot floating gracefully across the water sells the dream.

“A sail is the biggest canvas on the planet,” says Ghizlan, “but it’s always been on my mind that the canvas was so empty and virgin of anything. I just thought, it’s a pity because obviously the light could be the sun, the canvas could be the boat sail, and the sea is the gallery.”

It is a bold and spectacular concept that is sure to lead Ghizlan El Glaoui on another bright path. To see more of Ghizlan El Gaouri’s work, visit her website: https://www.ghizlanelglaoui.com

To hear the full interview between Monaco Life’s Cassandra Tanti and Ghizlan El Glaoui, click on the Podcast at the top of this article.