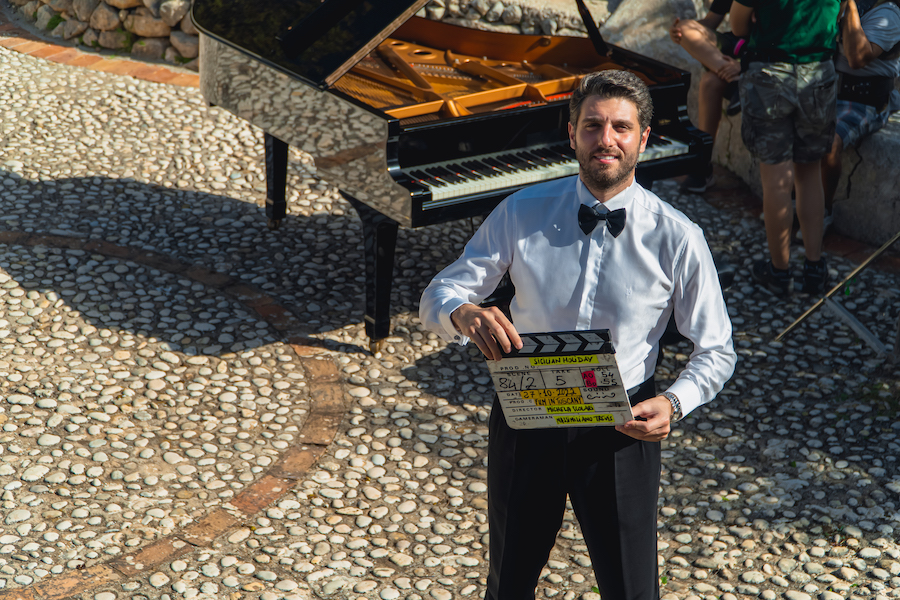 At just 29 years of age, it is hard to believe that Georges Tomb is already an award-winning composer and concert pianist. But that’s just the start of it.

Georges Tomb is a child prodigy. He has actually been making music since the age of five. Born in 1992 in Beirut, Lebanon, Georges was raised in a family of professional artists.

His father Samir Tomb is also a composer, pianist and orchestrator, his grandfather and uncle are eminent painters, and his three aunts – Amale, Ronza and Fadia Tomb – are all celebrated singers, not to mention the angelic voice of his grandmother, Georgette. Georges’ mother Guitta was his biggest supporter on his musical path alongside his piano professor Liza Tutunjian.

Georges Tomb has had many achievements in his career so far. He was the youngest in his country to have his music performed by the Lebanese Philharmonic Orchestra under the direction of Lebanese-American conductor Dr. Joanna Nachef (2014). He then gave a concert with the National Orchestra of Jordan at the Royal Cultural Centre in Amman under the patronage of Queen Noor Al-Hussein (2015). That same year, some of his compositions were played by the Vienna String Orchestra, conducted by Dimitrie Leivici, at Baden Castle, Vienna.

But it was in February this year that Tomb received his biggest accolade, winning ‘Best Music for a Feature Film’ at the Hollywood International Golden Age Film Festival in New York. It was for the music he composed for the film Enough! Lebanon’s Darkest Hour by Daizy Gedeon, a heart-wrenching, awareness-raising documentary about the country’s corrupt political system, which premiered at the Cannes Film Festival. For this soundtrack, he also picked up the ‘Outstanding Excellence Award for Original Score’ at the 2022 DWB Film Festival in Delaware and the best musical feature at the Hollywood International Golden Age Festival in New York.

In a solo piano concert this September, Tomb inaugurated the David Lynch Ceremony and the Better World Fund at the Venice Film Festival in the presence of Catherine Deneuve. He played his original music, including the many soundtracks that he composed for various projects, and announced the music United Against Violence campaign that will be launched next year.

He is now scoring the music for the next film of Mario Kassar, the Hollywood producer behind blockbusters The Terminator, Basic Instinct, and Rambo, the song for the movie Sicilian Holiday produced by Oscar winner Adam Leipzig, Michela Scolari and Ivo Romagnoli, as well as the music for Hollywood film Siege of Tyre produced by Tony Haswani.

He is also the commissioned composer of Pinocchio, an Italian ballet to premier in 2023 by Balletto del Sud at Lecce Opera House with the participation of award-winning choreographer Freddy Franzutti. The ballet will launch at the Opera di Lecce then embark on an international tour including the Royal Albert Hall in London, the Kings Theatre in New York, Paris, Dubai and Monaco.

“The ballet is different because there is no discussion, there is no talking,” says Tomb. “The talking is the music, so whenever Pinocchio is ‘talking’ to his dad Geppetto, the flute is speaking. You are just imagining the conversation and discussion via the music.”

Writing for the ballet is something composers do later in life, says Tomb, because it is very difficult. “But I was very blessed with this project,” he says, “especially as I am the only non-Italian on the staff.”

I ask him what his creative process is like.

“I’m old school. I don’t use electronics, just a pencil and paper. The music just shows in my head, I’m not really sure how. Then I write it out.”

“For film, I have the scenes in front of me, I watch them and then write the music. If the movie has a Turkish influence, for example, I need to have the music reflect a Turkish style.

“But writing music has never been hard for me. All instruments are parallel. I was five when I realised I could do this. It started when I saw an ad on TV for Miss Lebanon. I heard the music and went to the piano and started playing it. My parents went crazy! They took me to the conservatory the next day and I started playing there. The piano helped me to write music in a more logical way. It gave me a foundation. Composers who have classical foundations are rare in the business. They use more effects and electronics nowadays.”

So, which contemporary artist does Georges Tomb look up to? He says it’s the American composer, conductor and pianist John Williams, who he describes as his “orchestral mentor”.

But his dream project would be to score for a film on the life of Beethoven. “Though they would use Beethoven’s work for the film, I would like to take some of his piano music and orchestrally arrange it my way. He’s my mentor. I listen to his music every day. He went deaf from the age of 30 and continued to compose.”

Tomb has just finished writing a new Ave Maria dedicated to world peace. He is set to compose music for a large circus show in Europe, and he is also working on the music for an Armenian Genocide film, produced by Emmy Award-winning Nelly Achken.

It just doesn’t stop for this young composer.

“It’s a bit too early to announce anything, but we’re also going to have something this year with the orchestra, the ballet and a solo piano performance in the French Riviera and Monaco,” smiles Tomb.

“Monaco is amazing, it is such a beautiful country. But I felt when I came here the first time that, although it is absolutely gorgeous, it needs some new music, new magic and I don’t know why I felt it, but I am ready to do this here.”