"It was like looking for a needle in a haystack"

"It was like looking for a needle in a haystack" 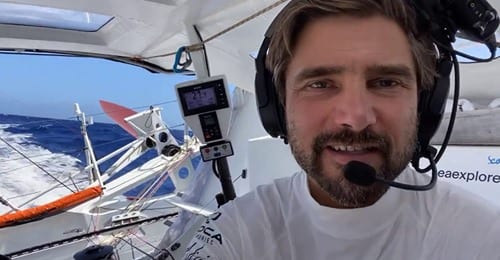 Boris Herrmann, captain of the Seaexplorer-Yacht Club de Monaco, aided in the rescue effort to find fellow sailor Kevin Escoffier after he was forced to abandon ship off the Cape of Good Hope.
No one said the Vendee Global would be easy, but for French sailor Kevin Escoffier it became downright impossible. Whilst sailing his yacht the PRB off the notoriously treacherous Cape of Good Hope some 840 nautical miles off the coast of Cape Town, South Africa, Escoffier’s boat “folded in half” in swells reaching five metres in height.
The Frenchman was forced to abandon ship in a 35 knot gale and retreat to a rescue raft, after he promptly put out a call for help. Four competitors, including Boris Herrmann of Monaco’s Team Malizia, joined in the after-dark search for the missing captain.
Eventually, it was fellow competitor Jean Le Cam on the Yes We Cam who spotted and picked up Escoffier “safe and sound” at around 5:15pm European Central Time on 30th November.
Escoffier was in third place when he launched his distress signal.
During a radio session on Tuesday after the rescue, Boris Herrmann explained how the dramatic operation unfolded.
“I was very focused on my task and had a search sector that I had to search very closely – with 600 metres between passages. One passage took me an hour. So, it would have taken 15 to 20 hours to search the entire search field that was assigned to me. At this moment, of course, one realises how large the search field is and that one is looking for a needle in a haystack. I was very motivated and looked in all the right places as best I could.
“It was extremely cold with high swell and spray coming over the deck. But it was great to see that the regatta management diverted all the boats that were available nearby and that we were able to search together with a fleet. So, we gave luck every chance and luck finally led to Kevin being found. This is a great relief and now the tension is dropping. Of course, there is also a certain sadness and the thoughts are with him. I am already back to my normal race, but I am not yet back to where the race is with my head.”
Yacht Club of Monaco Vice-President and Herrmann’s fellow crewmate Pierre Casiraghi, who waited expectantly for news on his friend, was relieved at the outcome.
“It can all happen so quickly in these kinds of sea and wind conditions. It was a very delicate operation,” he said. “My main concern was to tell Boris to be extra careful in such an extreme situation. Above all it was important not to add to the crisis by creating a second one. What a relief to know that Kevin is now safe, and I salute Jean’s courage and experience which made this rescue possible”.
Race Direction, who launched the rescue mission, must now figure out how best to get Escoffier back to shore, as well as sort out how to manage the loss of racing time for those who were diverted.