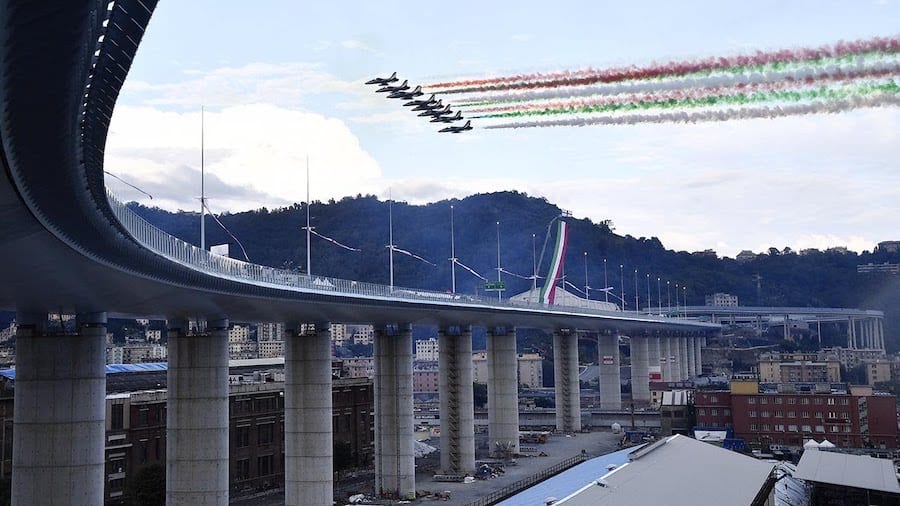 Traffic has begun traversing across Genoa’s new highway bridge, just two years after the terrifying collapse of the original Morandi bridge which killed 43 people.
“Today, Genoa is starting again,” Prime Minister Giuseppe Conte told a crowd of officials gathered in the port city on Monday. “Our country can face and overcome difficulties, and can go back to racing.”
Jets trailing the colours of the Italian flag roared overhead and ship sirens sounded as Genoa’s mayor, Marco Bucci, called the new bridge “a message of trust and competence for the future.”
Just before midday on 14th August 2018, the Morandi highway gave way during heavy rain, sending dozens of cars and several trucks plummeting onto railway tracks below. If the disaster had struck at rush hour, the death toll would have been much higher.
Each night, 43 stars will shine on the new bridge in memory of the victims.
The first cars crossed the sleek steel structure just after 9pm on Tuesday 4th August. The San Giorgio bridge was designed by famed Italian architect Renzo Piano and features a curved underbelly evoking the hull of a ship, in tribute to Genoa’s maritime history. The new bridge restores a primary connection between the western part of Genoa and the rest of the city, and between Genoa and much of north western Italy.
While the names of the victims were read aloud during Monday’s ceremony, many of their loved ones were not present, saying the pomp and ceremony overshadowed the 2018 tragedy.
“We’re still there, at the collapsed bridge, with the people we lost under the bridge. We’re stuck in 2018,” Giorgio Robbiano, 43, who lost his brother, sister-in-law and nephew in the disaster, told AFP on Tuesday.
However, he added: “the bridge had to be built and we’re happy for the city… It was also important to show that large works could be successfully finished in time, without complications.”
For decades, the Morandi bridge had suffered structural problems, leading to expensive maintenance. Its collapse put a spotlight on the country’s crumbling infrastructure.
Autostrade per l’Italia, the company that operated the Morandi bridge, is under investigation. The public enterprise was privatised in 1999. Several transport ministry officials are also being investigated for homicide. A trial is expected next year.