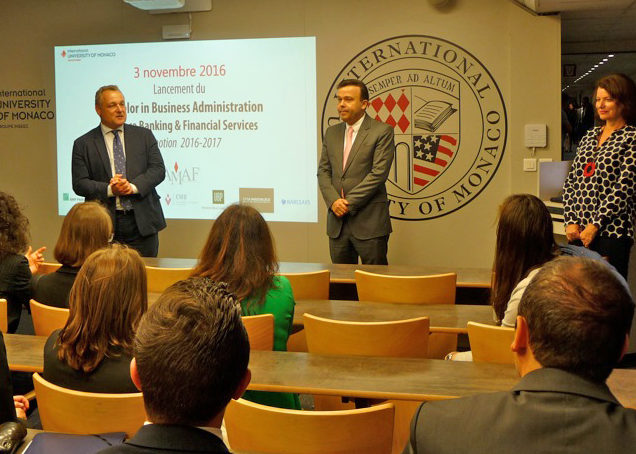 Thursday evening, Jean-Philippe Muller, Dean of the International University of Monaco, welcomed Stéphane Valeri, Minister of Health and Social Affairs and Isabelle Bonnal, Director of the Department of Education, Youth and Sport, on behalf of the 2017 class of Bachelor of Finance “Monaco Banking and Financial Services”.

Dr Muller, who has been Dean of IUM since February 2013, thanked the government, the dozen banks, which this year include BNP Paribas, Société General, Union Bancaire Privé, CFM Indosuez, BNP Wealth Management and Barclays, the Monegasque Association of Financial Activities (AMAF) and Pole Emploi for their support and cooperation, citing that this new program, along with IUM’s recently-launched Masters in Yachting, illustrate how the university is developing in harmony with the needs of the Principality.

The 13 students, 9 women and 4 men, will work in a bank as a salaried employee from Monday to Wednesday, and then attend classes at the university the other two days of the week. The course agenda is broken down into three sections: the technical side of the industry such as markets, products and the banking system; the culture of the industry and very high-end customer service; and regulation and etiquette. The last six months of courses will be taught in English.

Two of the female students told Monaco Life that the program interests them because they have a background in banking and wanted to develop their skills in the private banking sector, as they enjoy the customer service.

Candidates for IUM’s Bachelor of Finance “Monaco Banking and Financial Services” undergo a thorough interview with the university before meeting with the bank, who ultimately does the hiring.

A variation of the program was established in 2007 in the Principality jointly by the Directorate of Labour (through the Youth Employment Unit), the Monegasque Association of Financial Activities (AMAF) and the Banking Training Institute (IBF) in Nice. Part of the pedagogical content has been developed by professionals and IUM to meet the demands of Monegasque banking. The current diploma reflects a real need of the job market and is intended primarily for Monegasques, residents of the Principality and neighbouring municipalities.

This revised “100% made in Monaco” program was validated in May 2016 by the Department of Education while the cost of the apprentice training is paid by employers and then reimbursed by the Government of Monaco.

“The banking sector isn’t simple, it’s a discipline,” said Dr Muller as he thanked the students for their commitment to the program. “You are both employees and students, and I hope you realise how lucky you are in this program, because if you do a good job in the sector, the banks will probably accompany you in your path down the road.”

A8 off-ramp at Beausoleil closer to re-opening 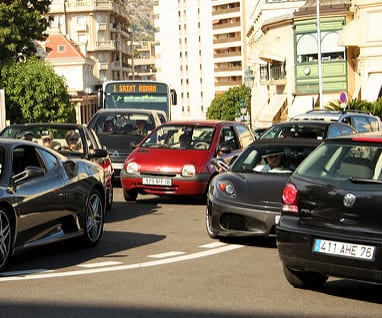 Photo: Damian Morys[/caption] The local French Department has committed €1.235 million towards the total cost of reopening the off-ramp on the A8 motorway at the Beausoleil services. The off-ramp is very much needed in order to relieve traffic congestion in La Turbie and to speed up access to Monaco. The off-ramp, built in 1979, was closed in 1994. The total cost of reopening will amount to €5.5 million, with Monaco contributing 33 percent. The French state will fund most of the remaining amount. Work is due to start next year with a target date for reopening in September 2019.

Christmas is coming to Monaco December 16 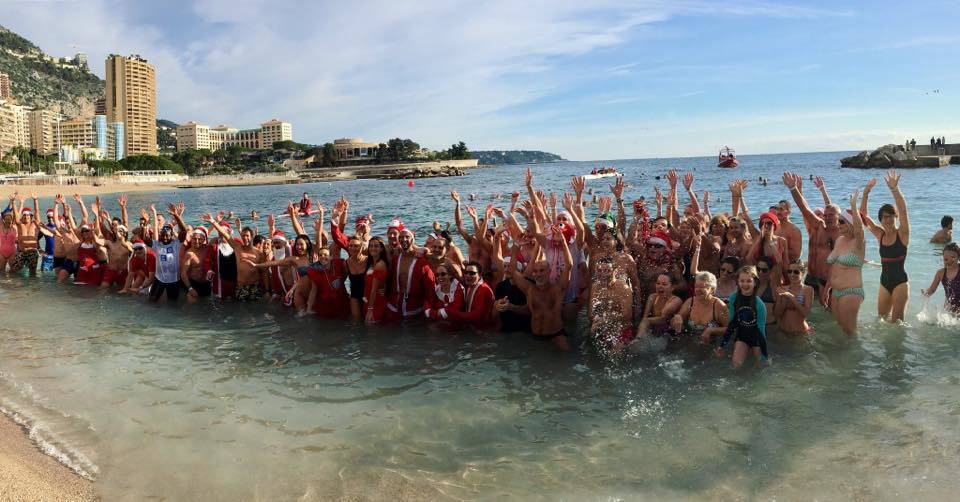 Christmas swim in Monaco December 24, 2016. Photo: Facebook Association Les Amis du Bain de Noël de Monaco[/caption] Today is November 15. This morning I roused a few Christmas decorations from hibernation and placed them enthusiastically on the mantle as Holiday Radio played non-stop Christmas Classics on my internet radio. My Joy to the World spirit wasn’t always so. As a child, Christmas was a happy time, a household full of friends and family, music and Grandma Gray’s shortbread. I was in the church junior choir, and my mom, a classically trained contralto who turned mezzo-then-soprano, accompanied us on the piano. But I have never been at ease with the commercial side of the holiday – it still strikes me odd that we have to buy something for someone – and for as long as I can remember, would volunteer at a home for the elderly, a soup kitchen, or a suicide hot line on December 25. As I got older, I moved around a lot, within Canada and France and eventually Christmas was a day far removed from carols and eggnog with loved ones. That all changed in November 2008 when I was invited to visit Santa Claus at the opening of Santa’s Village in Lapland, on the border of the Arctic Circle, courtesy of Finnair and Rovaniemi Tourism. Like any other interview, I did my research. Since 1985, Santa had been greeting some 300,000 visitors each day of the year in his “office” – a welcoming room with a fireplace, sacks of gifts, bookshelves and a photo-taking elf and dominated by a 10 metre cogwheel, known as the earth’s rotation device. It wasn’t just children who waited for their turn to sit on Santa’s knee. As I made way along the winding corridor, thousands of photos, from international celebrities to public figures with St Nick, lined the walls. I wrote at the time, “It is here in this room where the untainted faith of our youth, when anything was possible, resurfaces; as though the confession of an innermost wish to a gigantic man in a red suit puts you in good graces with higher powers. It is, quite simply, magic.” And that’s when it happened. Santa asked me what I wanted for Christmas, and I felt childlike and wide-eyed, I believed anything was possible. The jadedness that had slowly blinded my vision over all the years melted away and was replaced by hope. I flew back to Nice and booked a flight to Toronto on December 25 to surprise my family. On Christmas Day, I showed up at my sister’s doorstep and had a truly memorable visit. I went into the New Year chiming “in 2009, dreams will be mine”. Nine months later, I reconnected with the love of my life, who had proposed to me in 1993 after we met on a French immersion program in Quebec. He moved to France and we married on December 24 in 2010. Yup, he too loves Christmas. [gallery td_select_gallery_slide="slide" size="large" ids="25156,25157,25154,25153,25155"] So when I heard last year about the annual Christmas swim in Monaco on December 24, organised by the Association les Amis du Bain de Noël de Monaco, I was ecstatic. My favourite holiday combined with my favourite sport and for charity. Some 150 people turned out – families with kids, couples on bikes, friends and colleagues – sporting Santa hats, red t-shirts and even costumes to spend a convivial morning on the beach and enjoying the music and entertainment. This year’s Bain de Noel, 10 am at Larvotto’s Rose des Vents beach, will be the very first time in the event’s thirteen years that the swim will take place on Saturday, December 16, instead of the day before Christmas due to a schedule conflict (no, not with Santa). Money raised, as always, will be donated to a Monaco-based charitable organisation. This year les Amis du Bain have chosen an association that supports children of the Monaco Police force who are in difficulty – L'Amicale d'Entraide et de Prévoyance des Fonctionnaires de la Sûreté Publique. On-site registration, €10, includes a raffle ticket, croissants and coffee. I’m giving a month's notice in sending out a Monaco Life challenge to all of you – sports groups and clubs (COCC, AS Monaco rugby and friends, BOOST, Club 39), social and non-profit associations (Outward Bound Monaco, Child CARE Monaco, Monaco Air League, TEDx), restaurants and entrepreneurs (Stars'nBars, Blue Coast Brewing Company, MonacoTech, l'Orangerie, Les Femmes Chefs d’Entreprises de Monaco, JCEM), my fellow journalists at Riviera Radio, Monaco-Matin, Monaco Info, and, of course, students at ISM and IUM – whether you live in Monaco or not, to come out and smash last year’s number of 150 participants for the annual Christmas swim. Before you moan about the cold sea temperature, think about it this way. I’m asking you to stand or dip into the 15°C water for a group photo. Yes, it’s going to be uncomfortable, but facing that challenge for five minutes is nothing compared to what these kids face for an entire lifetime. Ho, ho, hope … see you December 16. For more see the Association Les Amis du Bain de Noël de Monaco's Facebook page @baindenoelmonaco. Article first published November 15, 2017.