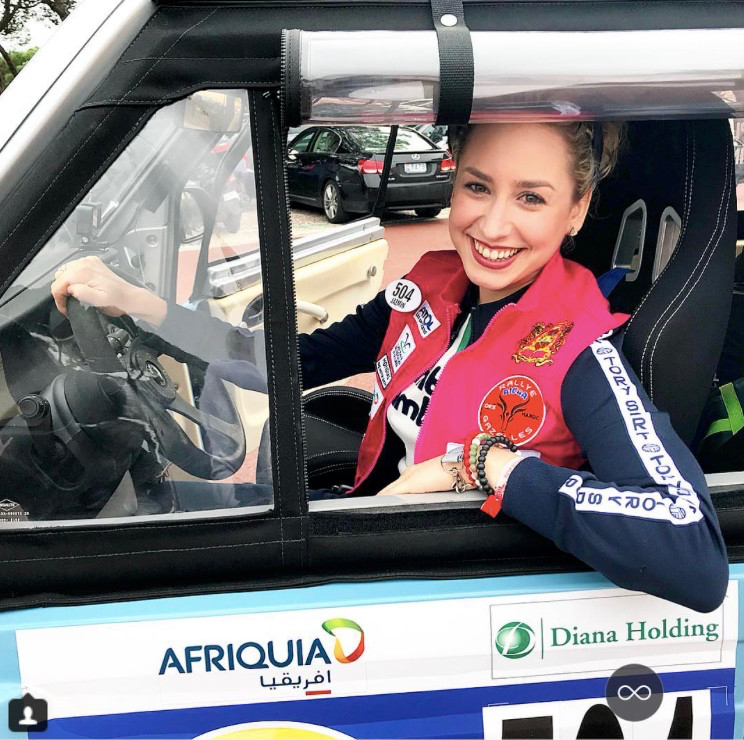 Prince Albert’s eldest child, Jazmin Grace Grimaldi, has been in Monaco to prepare for the ladies’ car rally, the Rallye Aicha des Gazelles du Maroc, which she is undertaking with cousin Pauline Ducruet, the daughter of Princess Stephanie. The women-only 9-day off-road rally started from the Promenade des Anglais on Saturday, March 17.

Jazmin is raising money for her own foundation, the Jazmin Fund, which she established in 2006 with the aim to build art-focused community centres in Fiji and help locals achieve a healthier lifestyle. Money generated by the rally helps to finance teams of doctors providing medical care in the remoter regions of southern Morocco.

Prior to setting out on the rally, Prince Albert’s daughter took the opportunity to promote her sponsors, including the skincare company the New York Dermatology Group.

Jean-Marie Véran, Special Advisor to the Minister of Foreign Affairs and Cooperation, Isabelle Picco, Ambassador Extraordinary and Plenipotentiary of Monaco to the UN and Serge Telle, Minister of State, at the UN Photo: CD.[/caption] The High-Level Forum on Sustainable Development, convened by the UN’s Economic and Social Council (ECOSOC), is being held at the United Nations Headquarters in New York from July 17 to 19. Serge Telle, Minister of State, presented the National Voluntary Review, prepared by the government, on the implementation of the Sustainable Development Objectives on Monday, July 17. Emphasising the importance of collective action to transform the world through 17 goals against hunger, poverty, disease, inequality, ignorance, injustice, irresponsible growth, climate alterations, degradation of the environment, and the destruction of the oceans, he declared: “Monaco spends more than 1.1 percent of its revenues on official development assistance (...) and more than 65 percent of its financing to seven of the least advanced nations, in the form of donations.” “(Bearing in mind) its size and with its means, Monaco wants to be positive and responsible.” Mr Telle added that the Principality has itself reached “a very high level of human development”. Monaco wishes to be an active player in the world by providing development assistance, he said. “It is in our common interest to engage collectively in the way that the United Nations proposes today: that of Sustainable Development.”

Lifestyle & Wellbeing Cassandra Tanti - December 5, 2019
Same sex couples in Monaco will be able to benefit from a host of legal rights afforded to married couples and their children, under a new Free Union law that has just been passed by the National Council. After reading a very detailed report by Pierre Van Klaveren on bill 974 and the civil contracts of solidarity, the law on the common life contract and the contract of coexistence was unanimously adopted by the Monaco National Council on Tuesday 4th December. "It's true, we would have preferred two different texts, but as we are pragmatic, we had declared ourselves ready to accept a single law, if it had two separate elements, with separate rights for couples and families, without hypocrisy, because of course their relationships are different. It's done,” said President of the National Council Stéphane Valeri. The rights recognised to couples, of the same sex or of different sex, protect a person in the most difficult situations of their life, such as disease, through the social coverage of their partner, or in death by more favourable succession rights or co-ownership of a lease. Mr. Valeri made a point of highlighting the fact that the common life contract is very different from a marriage contract, which remains unattainable for same sex couples in Monaco. According to French law, the union libre is an agreement between adults which grants rights between parents and potential children, but holds no obligation of sexual fidelity, nor does it grant reciprocal duties and rights between partners. “Tonight, through the joint work of the Monaco Government and the National Council, we are moving our country even more on the path of modernity,” said the council president. “This is good news firstly for all concerned couples - and I know there are many with us tonight. These couples will be able to benefit from the recognition of their situation, to which they can legitimately aspire. It is also excellent news for the international image of Monaco, a modern state which is always respectful of its institutions and values.”   Top picture: National Council votes in Free Union law. Photo: National Council