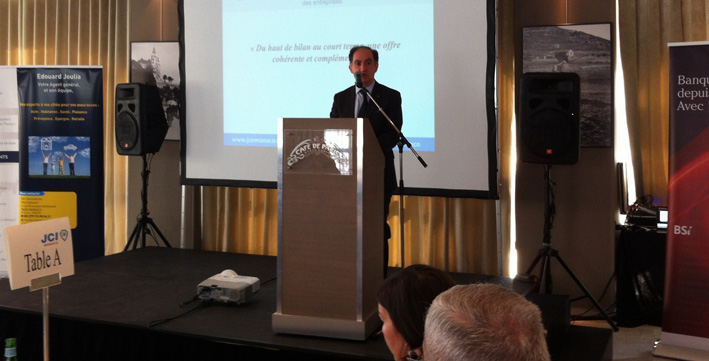 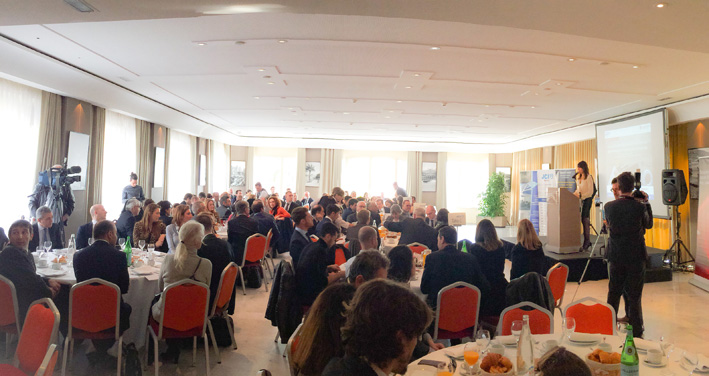 Monaco’s Junior Chamber of Commerce (JCEM) held its first networking breakfast of 2017 on Friday, March 17, at the Salon Bellevue of the Café de Paris.

Minister of Finance and Economy, Jean Castellini, delivered the morning’s opening and closing remarks, and answered questions from the audience. Minister Castellini took the opportunity to discuss Monaco’s new incubator and accelerator programme, a facility that will open in the fall of 2017 in Fontvieille. This strategy teams up Monaco Telecom, in particular with the current owner Xavier Niel, who will help select successful startups that are either already set up in the Principality, or identified using the incubation process started in Paris.

François-Xavier Le Clerc, Head of Department of the Business Development Agency, hosted the 2-hour discussion. Mr Le Clerc also launched an appeal: “I’m calling on businesses to submit propositions for the EUREKA program.” The EUREKA fund, offered to support to Monegasque companies for technological projects that are innovative and collaborative – they must have at least one other partner belonging to one of the 38 EUREKA member countries) – is made available through repayable loans or subsidies. The aim is to fund at least one “targeted and pragmatic” project per year.

Sandrine Fejoz represented SACDE, “Société d’Aide à la Création et au Developpement d’Entreprises”, a government owned venture capital firm which supports innovative Monegasque companies. Those with “innovative projects under development can contact the Government, that studies opportunities for financial support – contributing to the share capital of the entity to be created in the Principality and additional loans.” In some cases, repayment can begin after 24 or 36 months, to allow companies to develop and absorb social charges and taxes.

Many familiar faces were in the audience, including Serge Pierryves, Director of the Business Development Agency; Ambassador-at-Large, Henri Fissore, Marilyne Pierre from CREM, Alina Gavril from Barclays and Invest Monaco’s Justin Highman.

Philip Culazzo, who last year launched his made in Monaco company l’Orangerie, was also on hand. He told Monaco Life: “The Government has a superb range of assistance in place for supporting innovation, Research and Development and high value industry in Monaco. This is hugely beneficial to young companies such as mine in the early stages of development.”

The Junior Chamber of Commerce is a global movement (Junior Chamber International) made up of leaders, entrepreneurs, and executives, whose objective is to develop local economic attractiveness. In Monaco, it was founded in 1963 and has 130 members, with a program focusing on three major areas: entrepreneurship, networking and training.

The breakfast was organised by Melissa Bonello Richardson, Director of JCEM’s Breakfast Commission. The last JCEM breakfast in December was on Cybersecurity with the participation of the Minister of Interior, Patrice Cellario.

On the weekend of April 21-23, JCEM is organising its fourth Startup Weekend, at which ideas are turned into team projects and presented non-stop over 54 hours.

Teleworking is the future, says Minister

Business & Finance Cassandra Tanti - May 26, 2020
The European Commission has issued a new, and somewhat controversial, European budgetary proposal that includes a recovery fund to help coronavirus-battered economies rebound in the coming months and years.