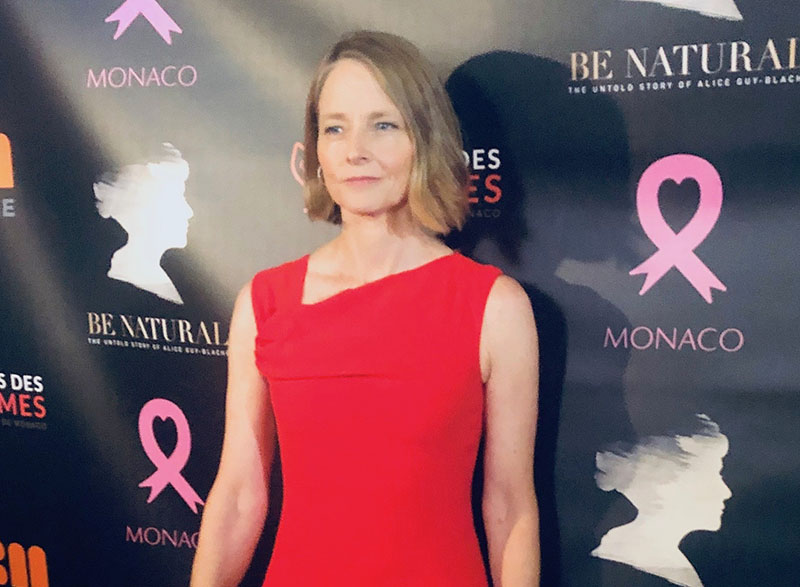 Monaco Life Editor Cassandra Tanti was at the Princess Grace Theatre on Thursday night where she spoke to Hollywood superstar Jodie Foster about the film ‘Be Natural: The Untold Story of Alice Guy-Blaché’, which was being screened at the initiative of Pink Ribbon Monaco.

For nine years, Pink Ribbon Monaco has been instrumental in promoting breast cancer awareness in the Principality. This year they raised the bar with a two day event that started with the screening of a documentary narrated by actress, director and producer Jodie Foster, who was also present to take questions and lead a public discussion after the film.

“I am here to support director and producer Pamela Green,” Jodie Foster told Monaco Life.  “She came to talk to me about Alice Guy-Blaché who I had never heard of in my entire life, which is kind of extraordinary as I have been in the movie industry for a long time. So I was totally blown away and inspired by the story and wanted to see it as much as anybody else.”

Be Natural: The Untold Story of Alice Gui-Blachéand tells the story of the first female film director who, after making more than 1,000 films, faded from the public eye and, to a large part, from history.

The screening was attended by Prince Albert II of Monaco who presented Pink Ribbon of Monaco Awards to both Jodie Foster and Pamela Green.

The Metropole Hotel Monte Carlo, a partner of the association, will follow up by hosting the first ever Pink Ribbon Awards ceremony tonight as part of a gala dinner.

The evening will celebrate those who have worked with and supported women who have suffered from this terrible disease and will also raise funds for the Princess Grace Hospital and patients at the Senology Centre. The hotel will exceptionally be bathed in pink light for the event.

Natasha Frost-Savio, the organisation’s founder, has been educating women and raising awareness about the importance of breast screening and prevention since 2011. She has worked tirelessly to turn Pink Ribbon Monaco from a once-yearly walk with a few hundred participants to an event marked by thousands of walkers, as well as putting together campaigns year-round to keep the word out there.

Read Monaco Life on Monday for the full interview with Jodie Foster and Pamela Green.