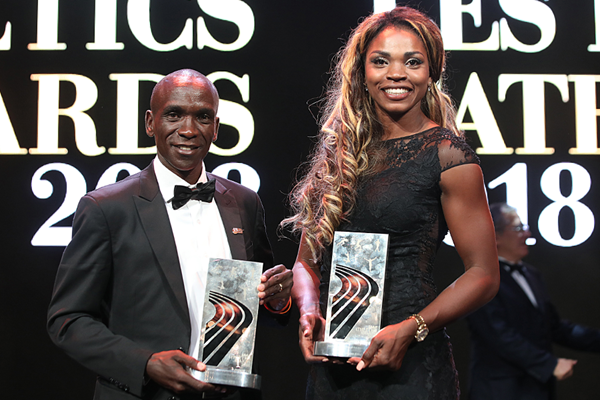 Eliud Kipchoge and Caterine Ibarguen have been named the male and female World Athletes of the Year at the IAAF Athletics Awards 2018, held at the Grimaldi Forum in Monaco on Tuesday.

Kipchoge underlined his status as the world’s most dominant distance runner. The 34-year-old Kenyan won the London Marathon in April in 2:04:17 to finish comfortably ahead of one of the deepest marathon fields in history.

Five months later, he won the Berlin Marathon in 2:01:39 to smash the world record. His time in the German capital was 78 seconds faster than the previous world record, representing the biggest single improvement on a men’s marathon world record since 1967.

Not content with being the best triple jumper in the world, Ibarguen also tested herself against the world’s best in the long jump this year – and consistently came out on top in that too.

The34-year-old Colombian won both horizontal jumps at the Central American and Caribbean Games, the IAAF Continental Cup and at the IAAF Diamond League finals – winning the latter two titles in two different cities within the space of 24 hours.

She was unbeaten in all eight of her triple jump competitions, ending the year with a world-leading mark of 14.96m in her specialist event and a national record of 6.93m in the long jump.

Other awards went to

People across the globe, including sporting heroes and HSH Prince Albert II, have raised a white card in honour of International Day of Sport for Development of Peace this week.

Romy Gai and Beniamino Savio, AWE Sport founders.[/caption] Awe Sport International, which opened an office in Monaco three weeks ago, has been selected as part of HYPE-Sports Innovation’s TOP 50 Program, which is renowned for launching the world’s most innovative sport startups into the future of this sector. The agency has been selected for its commitment in changing the way of conceiving a football match at the stadium by creating a unique atmosphere that goes beyond competition day itself. “We are extremely proud of this achievement that comes just two years after the beginning of our adventure,” said Romy Gai, President and Co-Founder of London-based AWE Sport International. “This is proof that we are going in the right direction and we are growing healthily. Our goal is to leave an important sign in the world of football, supported by our values and our passion for sport.” Dr Ilan Hadar, Partner and Chief Innovation Officer at HYPE-Sports Innovation, added, "We are excited to welcome AWE Sport to the 2018 TOP 50 Elite program and support them as they grow. We believe in their ability to make an impact on the World of Sports." AWE Sport is an international sports marketing agency that is the ideal partner for those who wish to invest in the world of sport, thanks to its consultancy and sponsorship activation services, the company says. “Strategic thinking and close attention to fan engagement, combined with diversified competences and creative mindset, allow AWE Sport to catch the best opportunities on the market and implement them effectively.”

Patrick Antonius, WGE 2017 Guest of Honour. Photo: Facebook World Gaming Expo[/caption] Given the history of Monte Carlo and its significance in the world of gambling, World Gaming Expo has chosen to hold the first edition of its top-end event in Monaco during the first week of December. The team has attracted many important names in the gaming industry for its three-day event that starts on December 6 at the Cafe de Paris with an invitation-only Opening Ceremony Gala and continues at the Grimaldi Forum. Among those exhibiting are industry specialists Euro Games Technology, Betconstruct, Greentube, Advansys and Patir Design and Monacair but the guest of honour for 2017 will be Patrik Antonius, the biggest winner in the history of online poker who now lives in Monaco. The main conference topics will illustrate how the gaming industry is adapting to radical and fast changes driven by new technology and software advances, the organisers say.