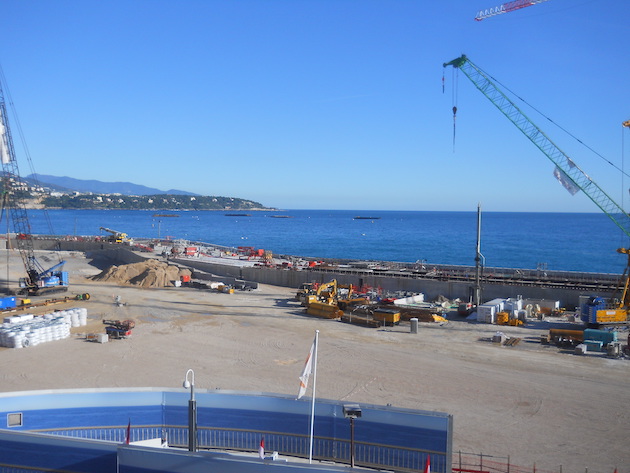 Despite setbacks due to extraordinarily bad weather conditions the past few months, the Portier Cove Mareterra land extension project is hitting a milestone with the near completion of the maritime portion of the development.
The wind, rain and huge sea swells in October and November of 2019 did not make working on the Portier Cove Mareterra land extension project an easy task. But according to Christophe Hirsinger, Director of Bouygues TP Monaco, “The work on land has hardly been affected at all.”
The past 14 months have been characterised by a seemingly endless series of violent weather episodes, any of which could have completely derailed the schedule of the project. As it stands, contingencies were in place and the site is pretty much on schedule, with no major deadlines at risk of being shifted.
But this is not without heroic efforts by the teams building the extension. Mr Hirsinger, recently told La Gazette: “Two work areas were particularly exposed. First the installation of the rip-rap along the caissons. Second the realisation on the Larvotto side of the connexion between the caissons and the land. We could not proceed to the installation of the casings when waves where forecasted. When we had these weather conditions, we lost several days on the planning because we had to secure the equipment, wait for the weather to change and then put everything in place again.”
It should be noted that despite the difficulties, certain aspects of the project are moving forward with better-than-hoped-for success. The Larvotto rip-rap works, for example, have only a few more blocks needed to be place.
As spring unfolds, the improvement in weather can only help move things along, bringing Monaco the much-anticipated new space for all to enjoy.