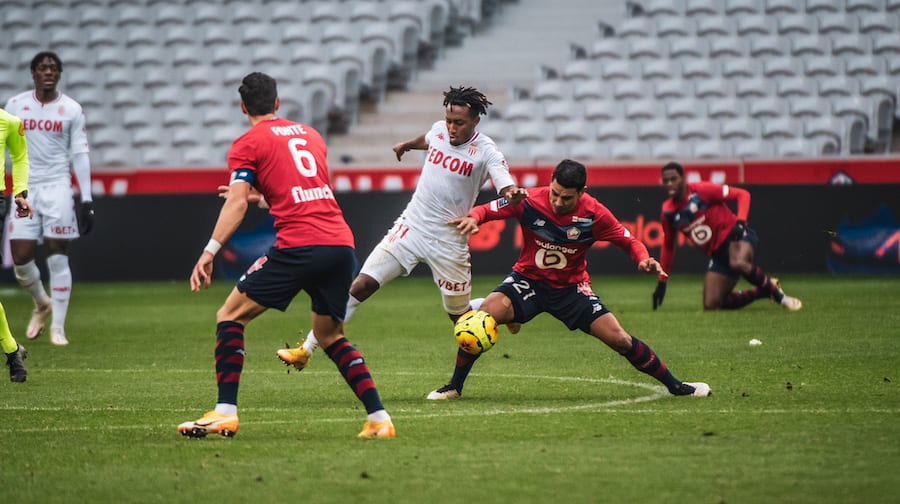 AS Monaco suffered a narrow loss to Lille OSC but prevented a shut-out with a last-minute goal made by 19-year old striker Pietro Pellegri in his first goal of the season.

After four in a row, AS Monaco endured a disappointing 1-2 loss to Lille OSC on Sunday’s 13th Ligue 1 matchday.

Though the first half produced no goals, it was a tactical battle between two evenly-matched teams who saw plenty of exciting back and forth, including several spectacular saves by Monaco’s goalie Vito Mannone, notably one in the 42nd minute where in a full body leap, he blocked a shot by Lille’s Jonathan Bamba.

The second half saw all the action. At 53 minutes in, Lille’s Jonathan David opened up the scoring giving the opponent the lead. Then about 12 minutes later, Yusuf Yazici made another goal after a cutback from teammate Burak Yilmaz.

Things weren’t looking great for the Red and Whites, but they persevered. Finally, just as the game was at its end the young Italian player, Pietro Pellegri, scored his first goal of the season as well as the only goal for his side that game, leaving the final score Monaco 1, Lille, 2.

“We obviously know that Lille are a very good team, which played in the Champions League last year and which have qualified for the Europa League this season,” said Coach Niko Kovac after the match. “I think they also have a lot of respect for us, off the back of what we’ve shown in the last four games where we’ve had four wins. We were very close. In the end there is only one goal on the scoreboard that separated us and in my head a draw would have been fairer, because there was nothing very spectacular, from one side or the other. Obviously when you lose a game like this you can only be disappointed.”

Local News Staff Writer - August 3, 2017
The Orchestre des Carabiniers du Prince have been invited to the Royal Edinburgh Military Tattoo, where they will play Friday night in the presence of HSH Prince Albert. Prince Albert has been invited to give the festival’s opening salute. The tattoo takes place every August, this year from the 4th until the 26th, as part of the Edinburgh Festival, and each year has a unique theme. For this 68th edition, it’s honouring Scotland’s Year of History, Heritage and Archaeology. The first official tattoo took place in 1950 and some 6,000 spectators watched eight items on display. In 2017, 8,800 spectators are expected watch the event every night on the esplanade of Edinburgh Castle as 1,200 performers – some 250 pipers and drummers, British Army personnel alongside other groups from the Commonwealth and military forces from France, India and the US – take to the stage. And for the first-time Japan will be represented as the Japan Ground Self-Defence Force Central Band performs. For one night only, on August Friday August 4, the Orchestre des Carabiniers du Prince will accompany guests from the Principality to share with the audience some of Monaco’s magic. The band documented Wednesday's rehearsal on their Facebook page. Some of the programme will be recorded by BBC and broadcast worldwide at a later date. Despite unpredictable skies, no performance at the Royal Edinburgh Military Tattoo has ever been cancelled. [caption id="attachment_20006" align="alignnone" width="538"]

5 ways to survive a Covid-19 Christmas

Local News Gavin Sharpe - December 21, 2020
Psychotherapist Gavin Sharpe gives his take on the psychological impact of the pandemic this Christmas and a handful of seasonal survival tips.