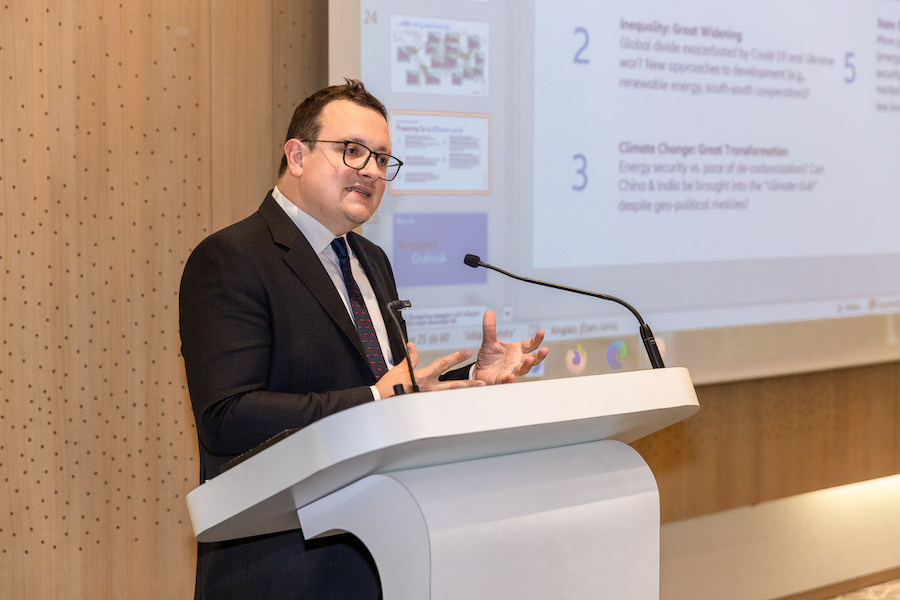 The Monaco Economic Board welcomed renowned economist Ludovic Subran to speak about today’s geopolitical situation and the resulting economic and financial consequences.

“I warn you, it’s not a panty party!” The opening line set the tone for the evening as Chief Economist of Allianz began his speech in front of hundreds of gathered audience members of the Monaco Economic Board (MEB), using a touch of humour to broach a serious subject.

“We are a bit like cicadas, and in the autumn we will find ourselves very deprived because there will be no more savings and inflation will still be just as high,” he went on to say.

Taking complex geopolitical data and financial figures, Subran spoke on the topics in a clear and precise way, giving hope in the face of the current situation. In his mind, the war In Ukraine and the consequent rise in energy pricing, as well as the supply shortages experienced worldwide due to the pandemic, have already created a recession in such sectors as trade.

This recession, he said, will get worse before it gets better, with the end of the year being toughest. Though this is no doubt going to be the case, he does not believe the recession will be “of great magnitude”.

Additionally, he sees wage hikes to offset the effects of inflation to be “necessary in the vast majority of cases”. Subran also foresees many bankruptcies in the near future.

On a more long-term level, Subran predicts many changes on the world scene, not least of which is the dollar being challenged by China and its ad hoc allies for power position, a widening of the gap between the developed and non-developed nations in terms of equality, climate change becoming a front-and-centre issue forcing those businesses who have not gone green to do so or die, and central banks looking for solutions to inflation that aren’t attributable to an overheated economy.

To meet these many challenges, the Chief Economist of Allianz recommends in particular greater “collaboration” in order to avoid “a situation where everyone would be a loser.”

The evening, which was attended by Minister of Finance and Economy Jean Castellini, Delegate Interministerial for Attractiveness and Digital Transition Frédéric Genta, and Balthazar Seydoux, Chairman of the Finance and National Economy Commission at the National Council, ended with a rooftop cocktail party where Subran was available to speak in a more relaxed setting about specific questions put to him by the assembled guests.

Ludovic Subran is the Chief Economist of Allianz as well as Chief Economist of Allianz Trade. Prior to joining Allianz, he worked for the World Bank, the United Nations World Food Programme and the French Ministry of Finance. A French national, Subran is a member of the Council of Economic Advisors to the Prime Minister. He is a Young Global Leader of the World Economic Forum, a Millennium Fellow of the Atlantic Council and a David Rockefeller Fellow of the Trilateral Commission. He was ranked by Richtopia in the Top 100 of the most influential economists, and by the Choiseul Institute and Le Figaro in the Top 100 of French leaders of tomorrow.

A graduate of the National School of Statistics and Economic Administration and Sciences Po Paris, he is fluent in seven languages.