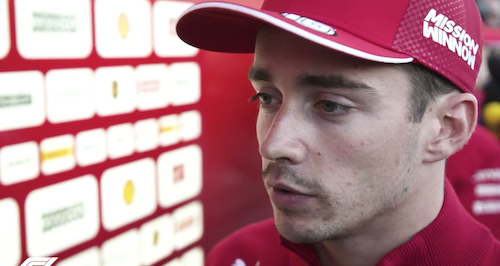 Monaco’s Charles Leclerc faced a rough road at the US Grand Prix held in Austin, Texas on Sunday, finishing a distant fourth place leaving both him and his fans baffled, while Brit Lewis Hamilton secured an astounding sixth F1 World Championship.

The US Grand Prix was nothing if not action-packed. It seemed to be anyone’s to win as ddrivers in the top spots, Bottas and Verstappen, made fine starts, followed by rocky ones from Ferrari teammates Vettel and Leclerc.

Leclerc’s fourth place start wasn’t in and of itself problematic, though he didn’t seem to have his head entirely in the game. It turns out, it wasn’t his head, but his car that was a bit off.

“It was an extremely hard day,” said Leclerc in a post-race interview with Formula1.com, “probably the most difficult race of the season, along with Budapest. We never found the pace really.”

He had suffered a throttle pedal issue at the opening practice, brought on by the bumpy surface of the track, a problem which elicited multiple complaints and caused many pilots to re-evaluate strategies. Leclerc then suffered an oil leak only 15 minutes into his final practice session, forcing him to replace the engine.

After his less-than-stellar start, he also suffered from a far-too-long 7.7 second tyre stop, and an unexplained problem in the car’s handling.

“The front left felt very, very weird,” Leclerc said about the state of his car. “We need to analyse that, because I’ve never had this feeling before.”

Leclerc’s teammate Sebastian Vettel was forced to retire on lap eight due to a complete failure of his vehicle’s suspension, making Ferrari’s day all the more disappointing.

It was Mercedes who delivered on Sunday, with a one-two punch. Valtteri Bottas won the day, with Lewis Hamilton only four seconds behind, giving him his sixth World Championship title, only one behind all-time record holder Michael Schumacher.