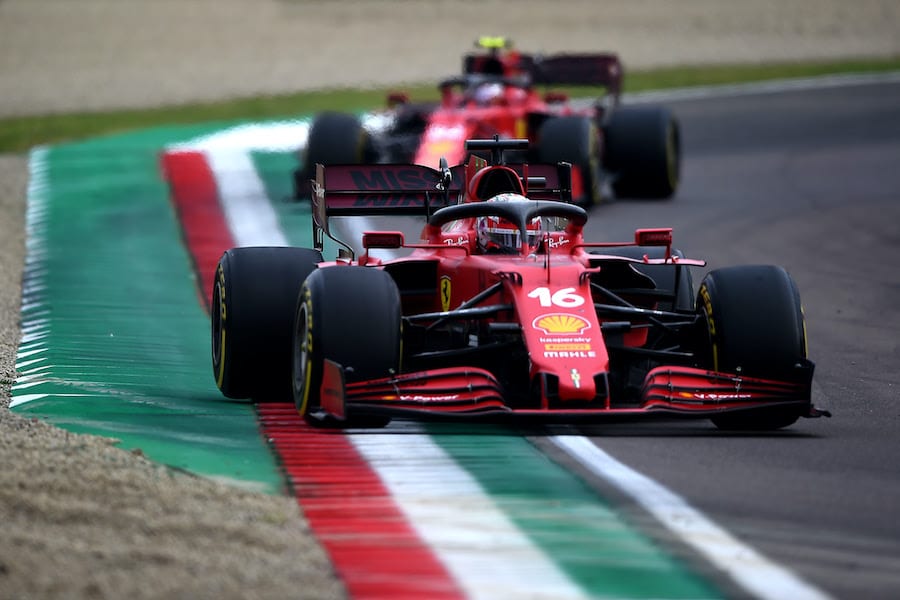 Charles Leclerc says he was disappointed to not take the podium in Imola, one of Ferarri’s home courses, on Sunday in a race that saw the king, Lewis Hamilton, dethroned and Max Verstappen take the top spot.
The Emilia Romagna Grand Prix in Imola on Sunday was no picnic. Starting conditions were soggy and a chilling accident occurred between Valtteri Bottas and George Russell where they both came out unharmed but angrily laid blame squarely on the other.
Charles Leclerc started off the race well as Ferrari had anticipated the wet start and tweaked their set-up to favour the conditions. This worked well for him as he made his way to second place with a good lead over Lando Norris and Sergio Perez, but that went up in smoke after the crash.
The rain stopped, the track dried out and the field closed up, leaving Ferrari’s wet set-up ineffective on the straights. Leclerc still held on to fourth place, whilst new teammate Carlos Sainz came in fifth, just behind him.
“I’m happy with the race, but at the same time a little bit frustrated,” Leclerc said. “The first part of the race, we were very competitive and everything looked good. Then with the red flag, all the cars were reshuffled, and it repacked everyone. And then we started to be a bit vulnerable in the straights. I was the first of the pack at first, struggled to defend on Lando, and then on Lewis a bit later.
“We should be very happy about this so yes, I’m happy with how things are going, we need to keep pushing and hopefully, we’ll be fighting further very, very soon.”
After the accident was cleared, the rolling restart could have been an opportunity for Leclerc to pass leader Verstappen, which in the end he decided against.
When asked after the race why he didn’t take the chance, he replied, “I considered it at one point, but at the same time I backed off. I think looking back at it, it was the right choice because I think he always had one wheel on the track.”
In the end, Verstappen held onto his lead, followed by Lewis Hamilton in second and Lando Norris third.
The next race on the Grand Prix schedule is 2nd May in Portugal at the Heineken Grande Premio de Portugal.