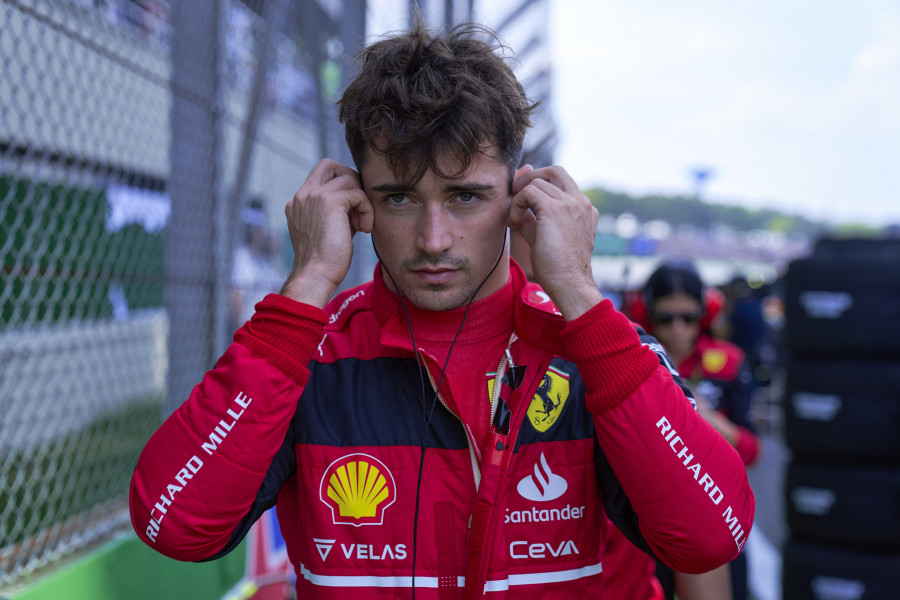 Charles Leclerc recovered from two huge setbacks at this weekend’s Brazil Grand Prix to secure fourth place and move back above Sergio Perez in the drivers’ standings.

However, the Monégasque driver was left frustrated with his Ferrari team post-race, with a lack of team orders depriving him of the race win on Sunday. At the front, George Russell registered a maiden win at Interlagos, sealing a British one-two, with teammate and honorary Brazilian citizen Lewis Hamilton close behind.

It was the same old story for Ferrari. A strategic error saw Leclerc start Q3 on the wrong tyres and his lap on the intermediates was only good enough for 10th. However, he managed to fight his way back up to fifth during the sprint race.

The Ferrari driver was dealt another setback on the seventh lap. After an early safety car, Lando Norris attempted to overtake Leclerc, but made contact and sent the Monegasque into the barriers. He managed to limp back to the pits for repairs, but came back out isolated at the back of the grid.

There was also contact between last year’s title rivals Max Verstappen and Hamilton, which seemingly ended the Briton’s hopes of recording his first victory of the season.

From there, under the radar, Leclerc made his way back through the grid. However, with just a few laps remaining, it looked like he would only get a smattering of points. But a mechanical failure on Norris’ McLaren brought out a dramatic late safety car.

Leclerc made further gains, crucially overtaking Perez, who dropped back on his set of old tyres. He then came onto the back of Carlos Sainz, who occupied the final podium spot. Leclerc repeatedly pleaded with his team to execute team orders and let him through, but those requests fell on deaf ears.

Despite Hamilton’s best attempts, he couldn’t get within striking distance of Russell, who took the chequered flag, with his teammate and Sainz completing the podium.

There was frustration for Leclerc, but also for the Red Bull duo. In order to help Perez in the fight for second in the championship, the team ordered Verstappen to let Perez back through, after the Mexican had ceded his place to allow the Dutch driver to attack Fernando Alonso.

Verstappen didn’t follow the order and was annoyed that the request had even been made. Perez then lashed out at his teammate, saying, “It shows who he really is.”

A respondent Leclerc is, at this point, just looking forward to the season concluding next Sunday in Abu Dhabi.

“It was a frustrating weekend, especially after what happened with Norris. I want to go to Abu Dhabi, run the last race, finish it and that’s it,” said Leclerc.