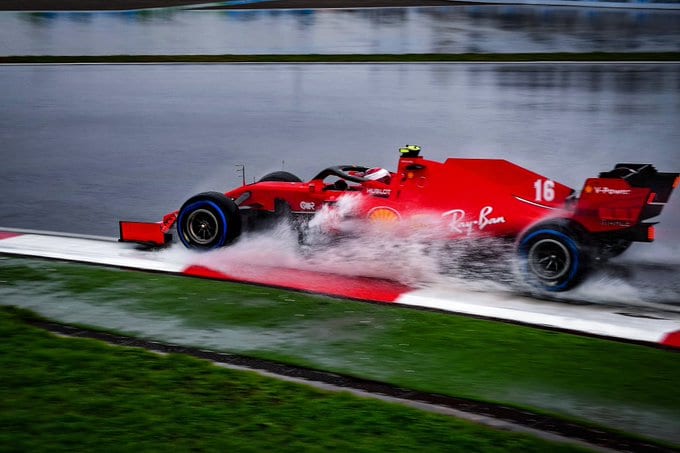 Monaco’s Charles Leclerc finished fourth place at the Turkish Grand Prix, just missing the podium, after a late error allowed Sergio Perez and teammate Sebastian Vettel to pass him in the final lap.
The Turkish Grand Prix was full of twists and turns as an incredibly wet track served up mischief and had drivers shuffling around like a deck of cards. The only thing that didn’t surprise was that the unstoppable Lewis Hamilton again took the top spot, securing him an astounding seventh Formula 1 World Championship.
Racing Point’s Lance Stroll had pole position but watched his hopes of a podium finish disappear after an unproductive pit stop saw his momentum falter when he experienced serious graining on his intermediate tyres.
Team Red Bull was faring no better with both Max Verstappen and Alex Albon unable to hold it together on the slippery terrain, ending up in sixth and seventh places respectively.
Then there was Monaco’s own Charles Leclerc, who had a not-so-ideal 12th place pole position but clawed his way up to second place by the final lap, only to lock a wheel in turn 12, running deep. This was just enough to let Racing Point’s Sergio Perez and Ferrari teammate Sebastian Vettel breeze past him.
Leclerc was bitterly disappointed in the finish, cursing himself on the team radio, saying “I did a **** job. I am so sorry to the whole team, I am ****** stupid.”
When he had a chance to cool off, he took to Twitter, still berating himself, but giving props where they were due saying, “So disappointed with myself today. We were extremely quick, but my last lap mistake is what cost us the 2nd place. On the other hand, happy for Seb, it’s been a very difficult season overall and he deserves the podium so much.”
Despite hoping for better, Leclerc is still not doing too badly, with his third top-five finish in a row, putting him ahead of Daniel Ricciardo in the standings.