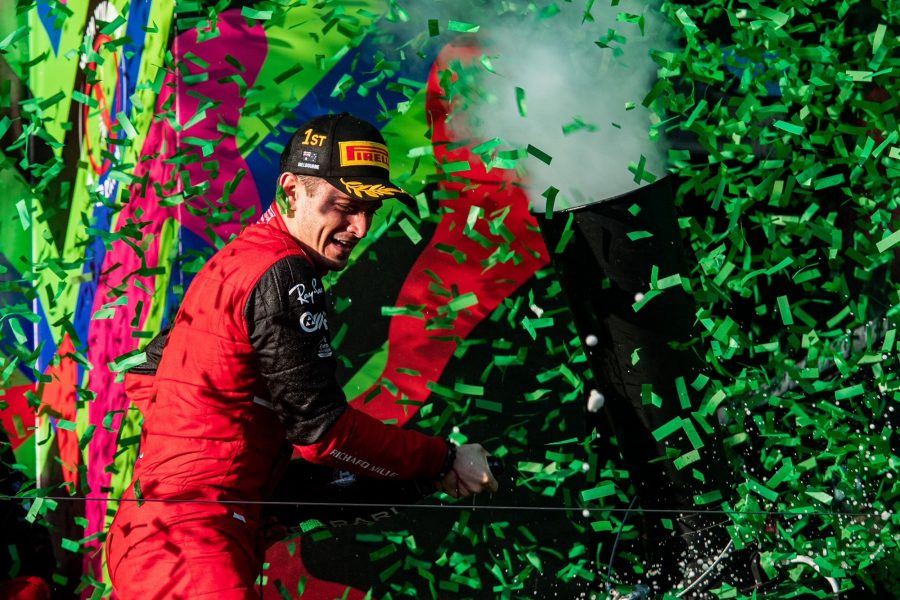 The victory never looked in doubt for Charles Leclerc as he wrapped up a dominant weekend with a race win in Sunday’s Australian Grand Prix, extending his championship lead.

Returning to Australia for the first time since the beginning of the pandemic, F1 teams were given an impressive welcome. Over 419,000 attended the circuit over the course of the race weekend, making it the most attended sporting event in Australian history.

Leclerc reigned supreme all weekend. He secured pole with a flying lap at the end of Q3, although he couldn’t count on his team-mate Carlos Sainz to aid him in his fight with the Red Bulls, as he could only manage ninth.

It was Sainz who was the big loser off the line. In need of gaining places to help his team-mate fend off a pair of charging Red Bulls, the Spaniard instead went backwards. Bogging down at the start, he lost five places. Languishing down in 14th, he was too steadfast in attempting to atone for his error, and, in an optimistic overtake at a high-speed chicane, missed his braking zone and found himself beached in the gravel trap.

That retirement necessitated a safety car, eliminating the gap that Leclerc had already begun to create to Verstappen up front.

This was a weekend in which Ferrari laid their marker, however, and there remains no doubt that they do in fact have the quickest car this season. Within six laps from the restart, Leclerc had grown a four second lead, giving him a healthy margin going into the first pit window.

Clearly quicker than everyone else on track, it was only the errors of others that put him back into the clutches of his rivals. First Sainz and then Sebastian Vettel. The German’s miserable return to the track following Covid went from bad to worse. A spin into the wall brought out the second safety car, George Russell the main benefactor as he pitted onto a podium position.

For the first, and only time in the race, Leclerc had to get racey at the restart. A poor exit from the final corner gave Verstappen a whiff of an opportunity, and he attacked on the run down to turn one. Leclerc, however, placed his car well, and did so again at the next braking zone to keep the reigning World Champion behind.

If there was any lingering doubt about the superior speed of this Ferrari relative to its rivals, it was extinguished this weekend. Leclerc’s pace was unmatched as he put in quickest lap after quickest lap.

Verstappen himself was in need of an extinguisher on lap 39. Losing power, he had to pull over, registering his second DNF in three races. His erratic start to the season (one victory, two retirements) continues, in a Red Bull that clearly remains dogged by technical issues.

Although Verstappen literally lost power out on-track, he has been figuratively powerless all weekend to prevent Leclerc from strolling to victory in Melbourne.

With a healthy gap to Sergio Perez, Leclerc could enjoy a serene ride to the chequered flag as he picked up his second win of the season.

The only concern for the Monégasque driver was securing the fastest lap, as he repeatedly, but politely, asked his team if he could try for the fastest lap. No need. He already had the fastest lap, and no one could match it. But just to be sure, he put in another fastest lap at the death as he crossed the chequered flag to cap the perfect weekend.

Perez and Russell rounded off the podium, the latter managing to keep team-mate Lewis Hamilton behind to secure his first podium for Mercedes.

Post-race, Leclerc expressed his surprise at his car’s pace. “The car was just amazing and I’m very pleased with how my race went. On paper, this was a track that we expected to be tough for us.” The Monegasque isn’t getting ahead of himself, and still expects a tough title challenge. “It’s a great way to start the season, but we have to keep in mind that we are only three races into a very long championship. We can’t afford to relax at any moment.”

Leclerc next heads to Italy for the Emilia Romagna Grand Prix, where you wouldn’t bet against him extending his already sizable lead of 34 points. It is still early in the season, but should Ferrari and Leclerc carry the same pace into the upcoming races, that much-coveted title battle may not materialise; Leclerc is in a league of his own.