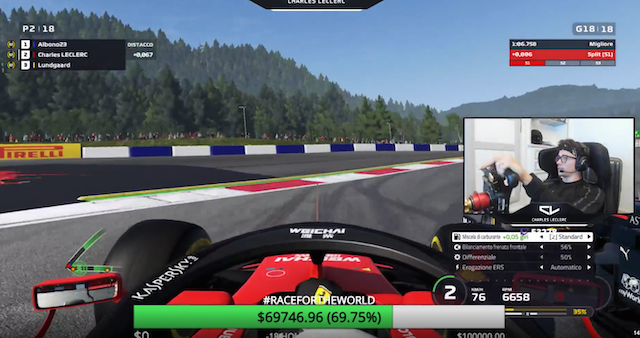 Charles Leclerc is on fire! The Monegasque champion has shown again that he has what it takes with a second Virtual Grand Prix win in a row during a hard-fought race against Alex Albon on Sunday.
The Virtual Chinese Grand Prix was held Sunday and the world’s best online racers competed on the Shanghai circuit for top spots. Monaco’s own Charles Leclerc, racing for Ferrari, came out victorious, giving him his second win against stiff competition.
Red Bull’s Alex Albon put Leclerc through his paces and ended up with the number two spot, his first time on the virtual podium. Formula Two driver for Renault and winner of the first Virtual Grand Prix on the Bahrain track, Guanyu Zhou, took third place.
Leclerc took to Twitter after his win, saying, “I’m actually enjoying very much playing, and streaming. And I enjoy it even more when I win. But the post-race celebrations are somehow feeling a bit different. Switching off the computer to go cook white pasta is a bit less glamour than spraying champagne on the podium.”
This is the third race of the Virtual Grand Prix “season” and this time there were seven actual Formula One drivers partaking in the race, joined by some of the world’s top gamers and celebrities. McLaren’s Carlos Sainz is the latest to make the leap from vehicle to virtual and join Leclerc, Albon, George Russell, Nicholas Latifi and Antonio Giovinazzi, along with a handful of Formula Two hopefuls. Sadly, Brit Lando Norris was again absent from the race due to connection issues for the third time. These ongoing technical difficulties are proving highly frustrating for both pilot and fans.
Footballers made a decent showing this time as well. Real Madrid goalie Thibault Courtois and Lazio striker Ciro Immobile took to the virtual streets and came in 15th and 17th respectively. Not bad for debutantes.
The 28-lap race was a nail-biting duel between Thai-Brit Albon and Leclerc, making for an exciting race for spectators, hungry for excitement while life stands still during the period of confinement. The races are held every other Sunday and are becoming a real boon to those missing the sport.
Meanwhile, the Race for the World series set up by Leclerc and other racing drivers has concluded and raised €70,000 so far for the World Health Organisation’s Covid-19 Solidarity Relief Fund.

The drivers had set a fundraising target of €100,000 and are still accepting donations towards the fund.
The Leclerc and Albon families locked out the top four places in the points standings. Charles Leclerc won the championship which began last Saturday, scoring 90 points over the six races.
Luca Albon finished second on 71 points, two places ahead of older brother Alex, the pair split by Leclerc’s brother Arthur on 58 points. Renault junior driver Christian Lundgaard claimed fifth.
Lando Norris, George Russell, Antonio Giovinazzi and Nicholas Latifi also took part in the series.