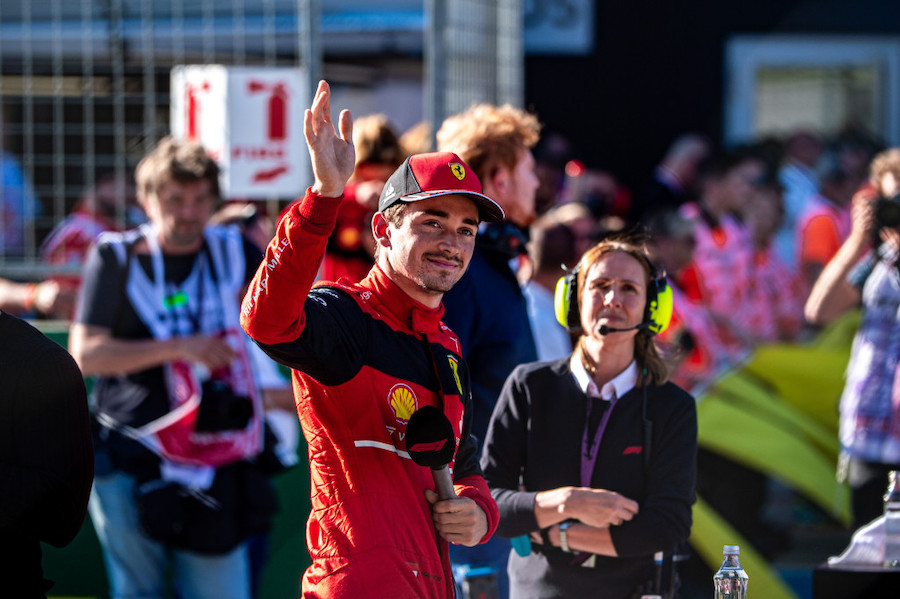 Charles Leclerc relaunched his world championship challenge at the home of Red Bull in Austria, as the Monégasque took the chequered flag ahead of Max Verstappen in his stricken Ferrari on Sunday.

Following a largely uneventful sprint race on Saturday where only Sergio Perez, who jumped from 13th to fifth, made notable inroads, Leclerc lined-up in second behind Verstappen.

A reported 60,000 Dutch fans descended on the Red Bull ring to watch reigning world champion Verstappen attempt to claim his third win in the last four races. As the race got started under a cloud of orange smoke, which billowed from the packed grandstands, it was clear that doing so would be a tall order.

His team-mate, Perez, saw his good work on Saturday immediately cancelled out. Attempting a move around the outside of George Russell, the Mexican was clipped by the Mercedes and sent into the gravel trap.

Although he kept his Red Bull out of the barriers, the damage sustained was terminal and he retired from the race before the midway mark. Russell meanwhile got a five-second penalty for the collision, the first of many to be dished out by the stewards – most of which were for exceeding track limits.

Ferrari’s pace over the Red Bull was immediately apparent. Leclerc almost took the lead with a late lunge down the inside of turn two on lap 10, but he did get his man just two laps later. The Monégasque was once again late on the brakes down the inside and made the move stick.

Following last week’s British Grand Prix, where Leclerc showed excellent racecraft, he had to show it again this weekend as, on a different strategy, he had to overtake Verstappen on three occasions.

Verstappen was largely helpless to defend against a Ferrari that was quick on the straights, and on a circuit with few corners and ultra-effective DRS zones, that was pivotal. Late on in the race Verstappen looked unlikely to cling onto second position, but just as Carlos Sainz found himself on the back of the Red Bull, his machinery gave-in.

Having pulled to the side of the track, Sainz was able to exit his Ferrari, which at this point was engulfed in flames. It was at that moment that Leclerc began to experience his own technical issues. Over team radio, the Monégasque complained that his pedal felt “weird”. His team confirmed the issue, telling him that the brake wasn’t properly releasing.

With just three laps to go, experiencing his own technical issues and seeing what had just happened to his team-mate, Leclerc was fearing another retirement, adding to those suffered in Azerbaijan and Spain. “My issues started at around the same time, so it was on my mind. I knew it wasn’t the engine, because it was just the pedal that was feeling weird. Luckily it lasted until the end,” said Leclerc post-race.

Verstappen, however, smelt the chance of an unlikely victory and closed to within two seconds of Leclerc by the end of the race. But it wasn’t enough to prevent Leclerc registering his first victory since April.

Verstappen, who picked up the fastest lap as well as the sprint race victory, limited Leclerc’s inroads to just five points. The gap therefore currently stands at 38 points, but Leclerc has now comfortably overtaken Perez to take second in the championship.

Leading a quiet, but ultimately fruitful race was Lewis Hamilton, who scored his third consecutive podium.

A relieved Leclerc was happy to consign a difficult run of victories to the past and once again start focusing on closing the gap in the championship battle. “I definitely needed that one,” Leclerc said. “These last five races have been incredibly difficult for me, but also for the team. To finally show that we have the pace in the car is incredible, so now we need to push until the end.”

There are two races remaining before the short summer break. The F1 paddock first heads to the Paul Ricard Circuit near Marseille in France before going to Hungary just a week later. Leclerc will be hoping that his revived title bid can build momentum in the coming weeks and allow him to head into the break high on confidence.