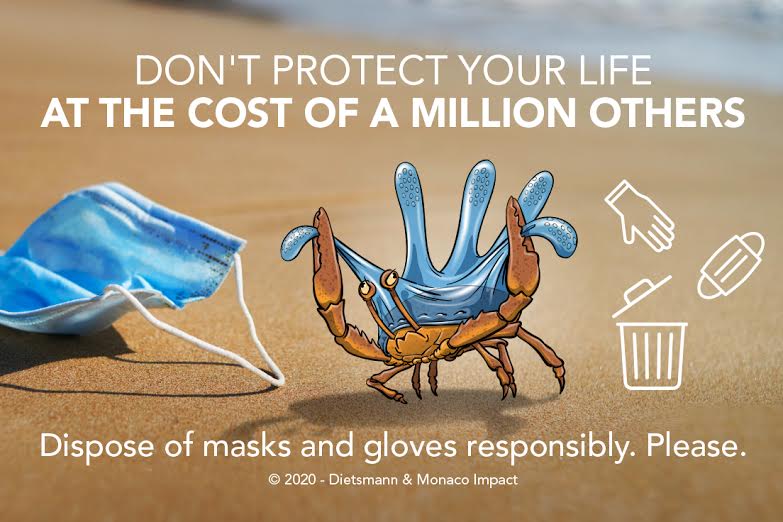 Protective gear may be good for safeguarding health against the coronavirus, but items such as disposable gloves and masks are becoming enormously detrimental to the environment due to people’s carelessness when disposing of them.

The BBC recently reported that around 129 billion masks and 65 billion pairs of plastic gloves are being used every month. Many find their way not into bins, but on the beaches, in the sea, in forests and on city streets.

In direct response to this problem, Monaco Impact has launched a new campaign under the slogan ‘Don’t protect your life at the cost of millions of others’ in an effort to raise awareness.

In partnership with Dietsmann Monte-Carlo, Monaco Impact hopes the message will remind people of the consequences of their actions.

In addition to being a rather disgusting health concern, as this type of waste can be contaminated, it is also an ecological concern due to the length of time these items take to decompose.

A plastic glove takes 100 years to decay in nature, whilst masks take up to 400 years. When ingested by marine life, these gloves and masks in their original forms are macro plastics that can kill wildlife through suffocation.

Surgical-style masks are made with a non-biodegradable, non-recyclable thermoplastic material that has a habit of breaking up into small fragments when immersed in water. The fragments become microplastics over time, and are equally ingested by marine life, also eventually causing death. The same goes for non-latex gloves.

If this isn’t enough to raise the alarm in people’s minds, it should also be noted that for those animals that are living with plastics in their systems, many find their way into the food chain and onto our plates.

Monaco Impact is asking that everyone act responsibly and dispose of these items in a dedicated bin bag. When the bag is full, leave it tied up and away from other rubbish for a full 24 hours before adding it to regular waste to decrease the risk of contamination.

A few simple steps can reduce the chance of these items finding their way into the waterways of the world, saving lives and making a difference.

For more info visit Monaco Impact on their website at www.monaco-impact.org