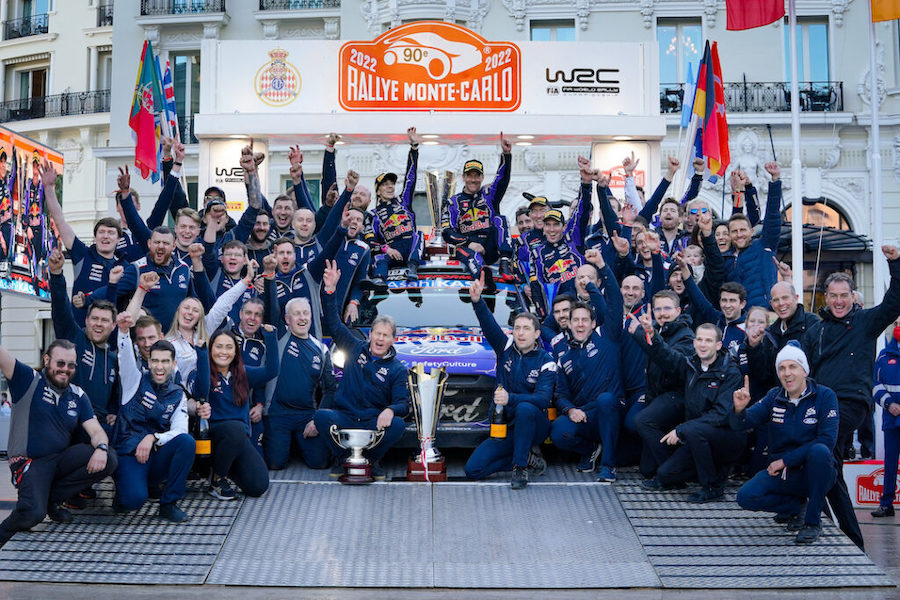 The pendulum swung back-and-forth between the pair the entire event. Defending champion Ogier began strongly on Thursday following the departure from Casino Square, winning both stages. The drivers’ route was illuminated by road-side fans, whose pyrotechnics and fireworks inaugurated the event in style as they raced through the alpine night.

Loeb, who was making a one-off appearance, wasn’t far behind, and set to work on reducing the slender six second deficit. Victories in the opening two stages narrowed the gap between the two Frenchmen, whilst Adrien Formaux came out unscathed from a hefty crash in snowy conditions, which saw the car tumble down the mountainside in the opening stage of Friday morning.

By the third stage of the day, which saw the drivers tackle some treacherous mountain roads around Valberg, Loeb had manufactured an advantage of 13 seconds to Ogier, whilst Welshman Elfyn Evans split the pair in second.

Englishman Gus Greensmith claimed his first World Rally Championship win, and although Ogier had reduced the gap to Loeb in the latter half of the day, Loeb still carried an almost 10 second advantage going into the penultimate day.

Saturday came and Ogier was on the charge. After a third place finish in the first event of the day, he won the second to retake the overall lead of the event by a matter of milliseconds. Another win in the 11th stage eked out the lead further, and by Saturday evening he had stretched out an advantage of over 21 seconds.

Ogier looked set to retain his title going into the final day, as he had seemingly fought off Loeb’s spirited fightback. But there was another twist in the tale. Ogier suffered a puncture on the penultimate stage, the lead consequently changing hands once again going into the final event of the competition.

With a deficit of 9.5 seconds to overcome, Ogier’s attempts to retain his title were hampered further, after a jump start saw him receive a 10-point time penalty. Despite a valiant effort, that deficit proved insurmountable, Loeb taking the title by 10.5 seconds.

Upon the Champion’s triumphant return to Casino Square, Loeb celebrated in style, performing his iconic backflip. His co-driver Isabelle Galmiche, a maths teacher, also became the first female winner of a World Rally Championship since 1997.

Loeb expressed his delight and surprise at taking home an eighth Monte-Carlo Rallye title, saying, “It’s an incredible feeling, it’s been so long. I was hoping to keep up the pace, but to win is unexpected… I didn’t expect so much when I came here.”

Loeb and Ogier threw up a battle for the ages amidst an incredible atmosphere, and hopefully they both return next year to write another chapter in this incredible rivalry.

Local News Staff Writer - May 29, 2017
https://www.youtube.com/watch?v=5ruwfj7vnrM The summer solstice, on June 21, 2017, will be observed for the fourth time in Monaco with a gathering of yoga for all in the centre of Monte Carlo. With the support of the Société des Bains de Monte Carlo, on the magnificent Terrasses du Casino and facing the Mediterranean Sea, a joyful and authentic celebration will unite beginners and regular practitioners alike, and it’s free of charge. The summer solstice is the celebration of creativity: music, art, dance and yoga. For this particular occasion, proclaimed by the United Nations as International Yoga Day, many yoga gatherings are held all over the world, from New Delhi to New York and from London to Madrid. “Everyone, regardless of age or level of practice, is invited to move, breathe, feel and relax on the Casino terrace. Come and share with your friends, your children, your parents and your grandparents! No previous yoga experience is required,” say the organisers. The programme starts at 5:45 pm, with yoga lessons at 6:15 pm and closing at 7:45 pm. Reservations can be made through the website Yoga Monaco Solstice.

Local News Staff Writer - November 30, 2018
More than 200 students from Monaco and 130 students voted for their favorite films, as members of Youth juries.