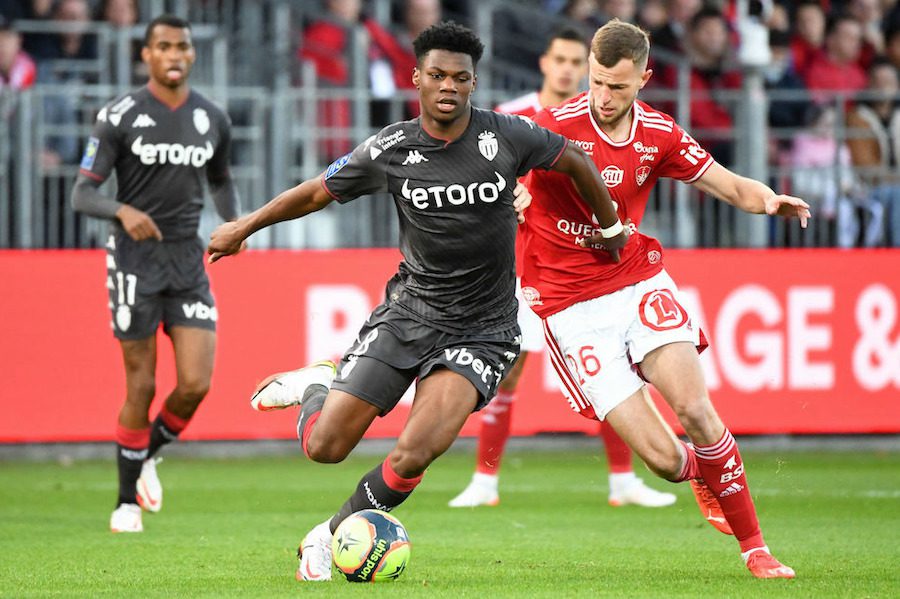 AS Monaco slumped to a disappointing away defeat to Ligue 1 strugglers Stade Brestois, who, despite being deprived of the ball for much of the match, came away as comfortable 2-0 winners.
The game quickly settled into its rhythm: ASM dominated possession whilst Brest were content to sit in a low block, remain compact and hit on the break whenever the opportunity arose. Having had barely a touch of the ball, it was Brest who took the lead through Mounié in the 18th minute. After a tussle near the ASM corner flag, where Caio Henrique’s shirt was clearly tugged, it was Brest who were controversially awarded the freekick. Brest took full advantage, and the subsequent freekick was bundled in by an unmarked Mounié at the back-post after a flick-on from Le Douaron.
Now with a lead to hold on to, Brest dropped deeper and deeper, but were combative and well-organised enough to withstand the pressure. As well organised as Brest were, ASM’s lack of dynamism in attack was clear to see. Despite having 71% of possession in the first-half, their build-up play was lethargic, and their over-reliance on making long balls stick meant that they created very few notable chances.
Brest came out for the second-half in an even lower block. They were happy to cede possession and territory, and allowed ASM to play deep within their half without any pressure on the ball. For ASM, however, it was the same story as the first-half. Despite the introduction of their talismanic playmaker Golovin midway through the half, they couldn’t break down the stubborn Brest defense.
Gedson Martins had the best chance for ASM, but his back-post header was straight at the keeper. The smash-and-grab was completed in the 79th minute. With Monaco committing men forward in search of an equaliser, the space was available for Brest to hit on the break. A swift counter attacking move reached its crescendo when Honorat slotted in unmarked from Cardona’s cross to send the home fans at the Stade Francis-Le Blé into raptures, and secure an important victory in their fight for Ligue 1 survival.
Post-match, Nico Kovac was critical of ASM’s lack of cutting edge, saying, “I am not satisfied with the performance of my team. We had a lot of the ball but we didn’t show ourselves as being dangerous. We have to improve, otherwise these kinds of matches will always be difficult.”
Defeat sees ASM slip to 10th in the Ligue 1 table and four points adrift of the European places. Kovac’s men have a chance to bounce back in their crucial Europa League tie against PSV at the Stade Louis II on Thursday.