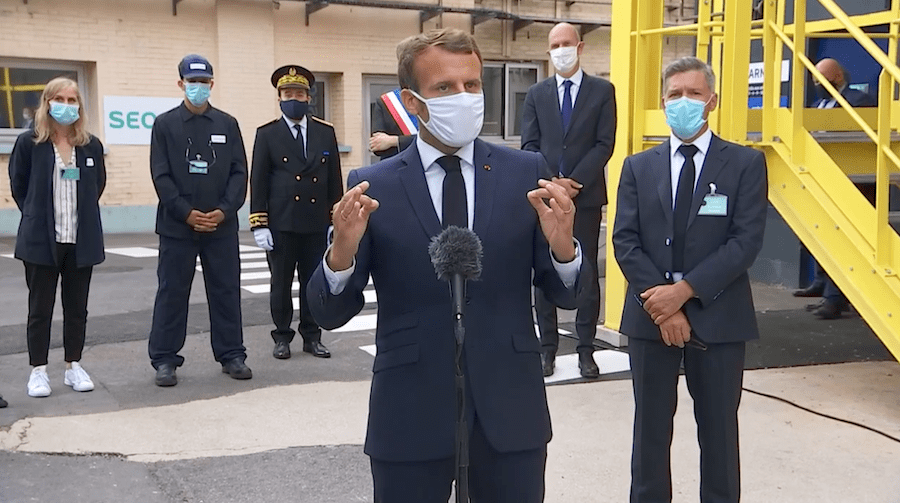 French President Emmanuel Macron has presented a green-tinted €100 billion recovery plan to pull the country out of its economic slump and create jobs.
France’s new stimulus package of €100 billion, equalling roughly 4% of the country’s gross domestic product, is the government’s attempt to kill two birds with one stone. The hope is that it will do the intended job of re-energising a Covid-ravaged economy, as well as creating a slew of more eco-friendly practices in companies.
The two-year package programme, called France Relaunch, is a fast-moving beast and focuses on supporting growth for businesses who would receive funds on a use-it-or-lose-it basis. The plan also has €30 billion set aside to promote greener energy policies, making it one of France’s most forward-looking plans to date. The rest of the massive sum will go toward training, wage subsidies, and social initiatives such as tax cuts, with the goal of seeing 160,000 new jobs available in the upcoming year.
“Economically and socially, it is infinitely better to temporarily worsen the public finances to invest, re-arm the economy and move forward than to sink into austerity and let unemployment and human drama explode,” Castex told journalists.
The recovery package comes without a moment to spare as France and Europe brace for one of the worst recessions since World War II. An 11% decline in GDP is forecasted for this year, based on the 13.8% drop in the second quarter of 2020, and there are signs that unemployment is on the rise. The country’s debt burden sits at a whopping 120% of output, and the success of the plan hinges on European financing of up to €40 billion if it has a shot at succeeding.
This high-stakes move comes as the 2022 elections loom in the distance and could be make-or-break for Macron should he decide to run again for President. Time is of the essence if he is going to be seen as an effective reformer President with a well-defined policy makeover agenda. If all goes to plan, Macron’s record on the economy would be restored as would his pro-business stance, which has suffered from the health crisis as well as union friction. Additionally, he would no doubt benefit from the green aspects of the programme, widening his base to the younger voters who see the environment as a pressing concern.