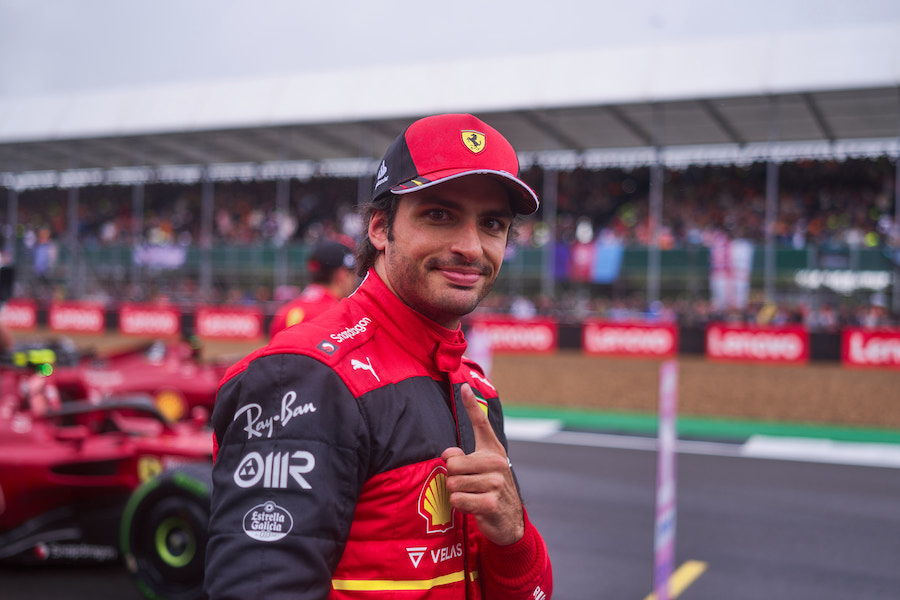 Carlos Sainz Jr. was the major benefactor after a late safety car shook-up an already intense race, which was heavily delayed after a dramatic Guanyu Zhou crash brought out the red flag.

After a sodden qualifying on Saturday, which saw Sainz claim his first ever pole position, the sun shone on Silverstone on Sunday as Charles Leclerc looked to get his championship bid back on track.

Things couldn’t have started much worse for the Monégasque nor his Ferrari team-mate. Pole-sitter Sainz was swallowed up by the charging Red Bull, whilst Leclerc lost out to home-favourite Lewis Hamilton, whose improving machinery is now allowing him the opportunity to challenge the race leaders.

However, what happened behind would undo everything. Pierre Gasly tried to fit through a George Russell-Zhou sandwich, but as the former squeezed the space, there was contact between the Brit and Gasly. Russell was sent spinning into the side of Zhou, whose car was immediately overturned and sent hurtling towards the barriers.

Thankfully, the rookie emerged unscathed, but was grateful for the halo system, which once again most likely made a life-saving intervention. After a 50-minute red flag, the action got underway once again, but as the cars hadn’t passed the second safety car line, the grid would once again line up in qualifying order.

Sainz made the most of his reprieve. Despite getting another poor start, the Spaniard defended aggressively from Verstappen to retain the space. Behind them, Leclerc made contact with Perez as the two vied for position at turn four. That contact forced Perez into the pits and seemingly put him out of contention for the podium places.

Verstappen did take the lead on lap 9, capitalising from a Sainz error at Becketts corner, but soon after the race took another turn. Verstappen was heard over team radio reporting that he had run over debris and the Dutch driver was immediately forced into the pits, ceding the lead to Sainz but also handing second place to Leclerc.

Despite Leclerc’s stricken front wing, the Monégasque had the pace over his team-mate and took the lead on lap 20. Following a round of pit stops, Sainz came back out in the lead, but it was once again apparent that he didn’t have the pace to hold it. Ferrari initially told the drivers that they were “free to fight” but seeing Hamilton eat into their lead, the switch was made and Leclerc once again hit the front.

After last year’s disappointment at the British GP, where he had held the lead for so long before being overtaken by Hamilton at the last, it looked as if Leclerc would finally obtain that elusive Silverstone victory.

But, with just over 10 laps to go, lady luck once again didn’t shine on Leclerc. Esteban Ocon stopped on the old start/finish straight, bringing out the safety car. Whilst all of his competitors used that opportunity to stop for soft tyres, Leclerc stayed out on his used set of hards. His team’s strategy had once again failed him, just as it did in Monaco, and he was a sitting duck.

Sainz made short work of getting past his stricken team-mate, but Leclerc put up a more stern rear-guard, culminating in one of the best laps of racing seen in F1 for many a year on lap 48. Ultimately, however, Leclerc didn’t have the tyres to keep them behind and Perez, who had miraculously recovered from that unscheduled early pitstop and Hamilton both forced their way through.

Up front, Sainz made no mistakes as he took the chequered flag for the first time in his career to break Red Bull’s run of six consecutive victories. Leclerc was left to mull over “what ifs” once again, as he watched on whilst his team-mate held aloft the winner’s trophy.

Perez brought his Red Bull home in second, whilst at his home race Hamilton managed third. Leclerc finished fourth and, in what was a drive of damaged limitation, Verstappen managed seventh. The reigning World Champion therefore retains a healthy championship lead going into next weekend’s Austrian GP.